By Saniya Bulatkulova in Kazakhstan Region Profiles: A Deep Dive Into the Heart of Central Asia, Society on 3 July 2022

NUR-SULTAN – The cub of Kazakh argali (mountain sheep) was first caught on camera in Tarbagatai National Park in eastern Kazakhstan in mid-June, reported the Forestry and Wildlife Committee of the Kazakh Ministry of Ecology, Geology and Natural Resources on its Instagram. 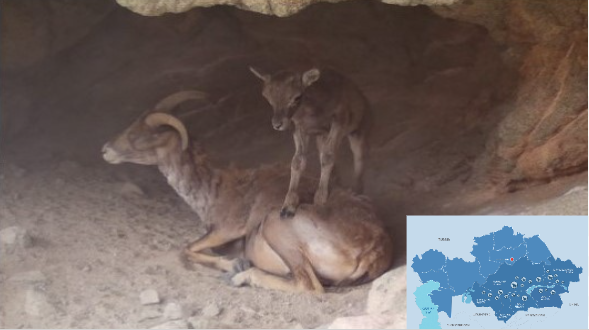 A female mountain sheep with her cub. Photo credit: Tarbagatai National Park. Click to see the map in full size

The photo of a female mountain sheep with her lamb was recorded on May 30.

“Until the cub reaches maturity, the female moves very carefully. She hides the lamb and attracts attention to herself at the first sign of danger and sometimes leaves the territory for a while,” wrote the committee.

Being one of the largest mountain rams, it inhabits the mountains of central, southern, eastern and southeastern Kazakhstan. In the spring, argali rams give birth to one lamb at a time and rarely two lambs.

The Kazakh argali is a rare animal, whose population has been declining in recent decades due to direct destruction and displacement from pastures by livestock. The Kazakh mountain sheep is listed in the country’s Red Book of Endangered Species.