A Blend of Unique Gorges, Mountains and Canyons Awaits Travelers in the Zhambyl Region

By Saniya Bulatkulova in Kazakhstan Region Profiles: A Deep Dive Into the Heart of Central Asia, Tourism on 17 July 2022

NUR-SULTAN – Amazing dunes, broad steppes, and majestic mountains – all these landscapes can be found in one place – the Zhambyl Region, the homeland of prominent Kazakh poet Zhambyl Zhabayev.

A mountain area of the Zhambyl Region. Photo credit: e-history.kz

The area, which is located in South Kazakhstan, is widely known for its hot climate, while only a few domestic and foreign tourists can boast about climbing the local mountains, trying the Mereken district’s mineral water treatment, and experiencing the joys of parachuting and paragliding.

The Kazinform agency offers a short list of top-rated local attractions, the majority of which are located in the Zhualyn district.

Located 60 kilometers from Taraz, the Zhualyn district is famous for its untouched nature and fertile soils. It hosts the picturesque Bilikol Lake, Koksai mountain canyon, and the gorge of Berikkara. It is situated close to Western Tien Shan’s spurs, which astonish tourists with their alpine meadows located at a height of 2,000 meters.

Established in 1926, the Aksu-Zhabagly Nature Reserve is also located here. It became the first reserve in Kazakhstan and the first biosphere reserve in Central Asia demarcated by the United Nations Educational, Scientific, and Cultural Organization (UNESCO). 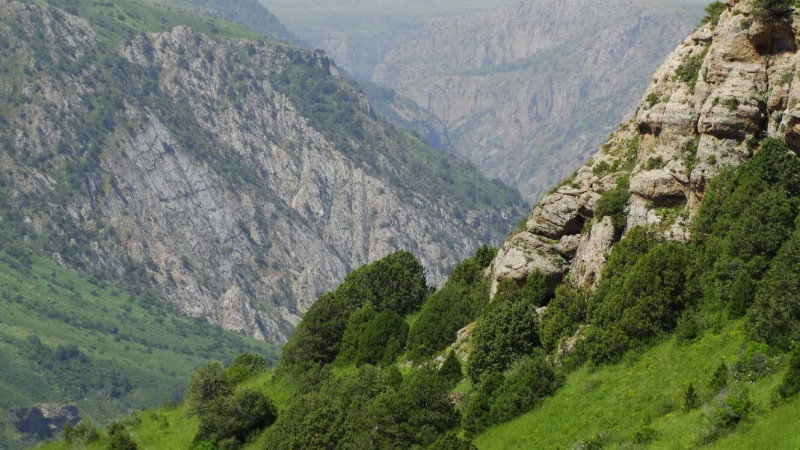 In the Zhualyn district, there is a mountain canyon named Koksai which was formed by the Koksai River. It originates in the glaciers and cuts through the Zhualyn plateau as it exits from the mountains, forming a bizarre topography. The border of Kazakhstan with Kyrgyzstan passes along the gorge and coincides with the boundary of Aksu-Zhabagly Nature Reserve. 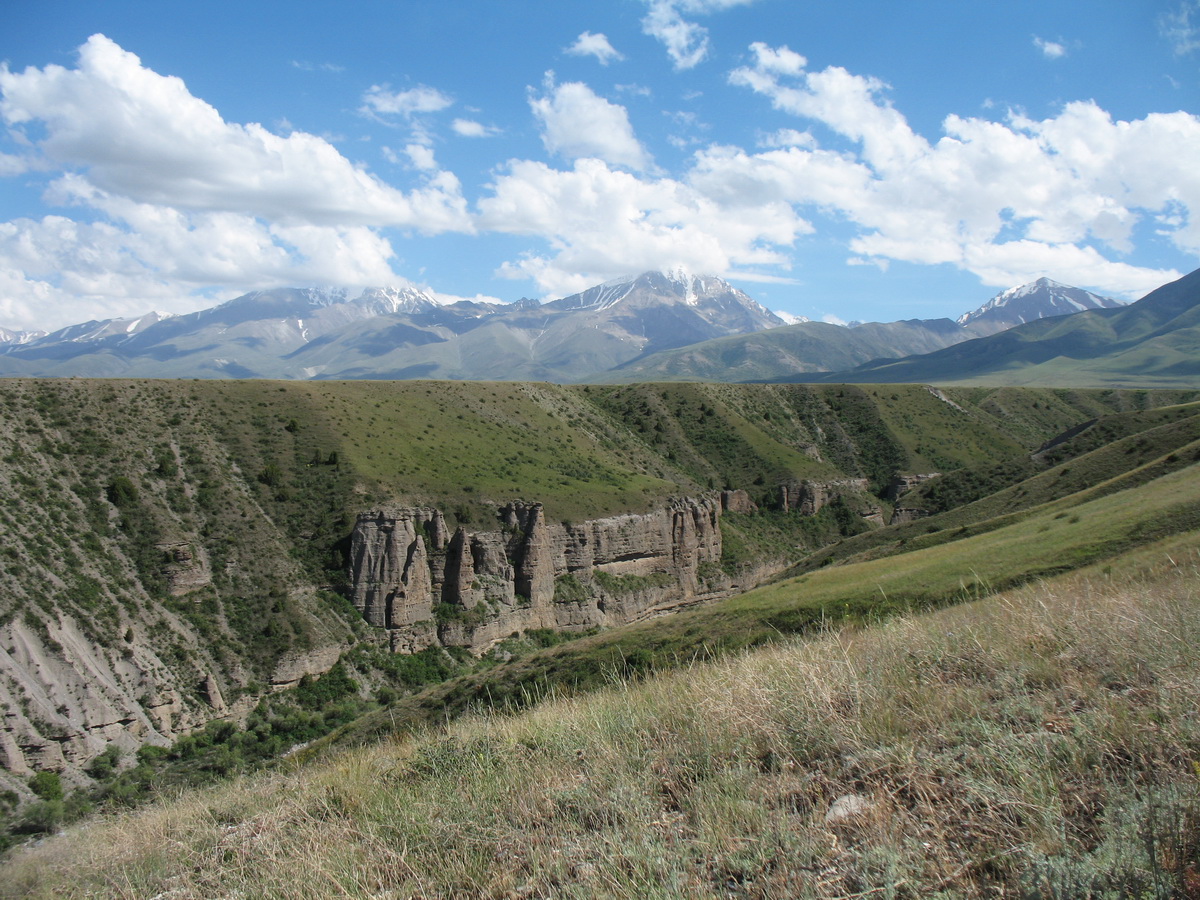 On the lower Koksai gorge, tourists can find Tugai forests, woodlands dominant juniper trees, and other rare and endangered species of plants. On the top of the gorge, there are subalpine meadows, where valuable ornamental and medicinal plant species grow.

Aksai, where the air is clean as a spring water

Another destination is located 12 kilometers away from the village named after Kazakh national hero, writer, and military leader Baurzhan Momyshuly in the Zhualyn district. The mountain river flows straight from melting glaciers along the Aksai gorge, where trees, herbs, shrubs, and flowers grow. 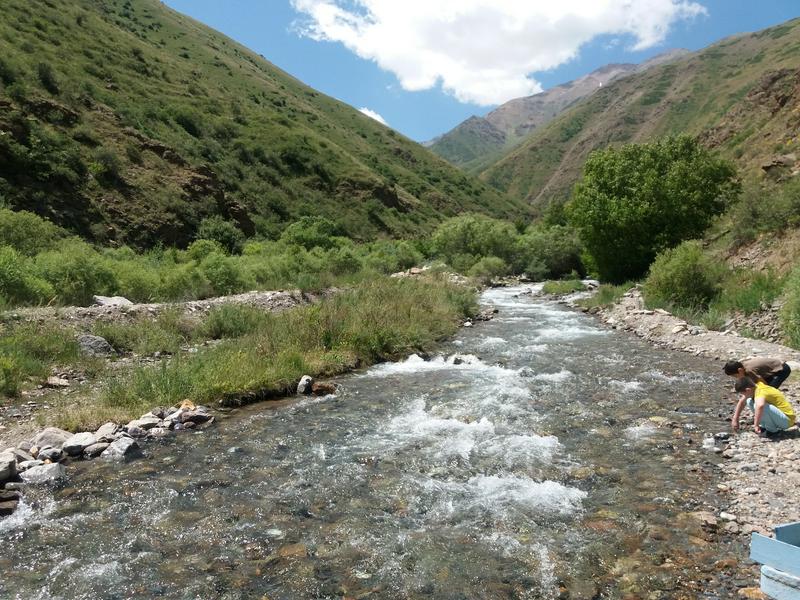 The mountain river that runs along the Aksai gorge. Photo credit: inform.kz

Zhualyn locals say that it is possible to meet bears, wolves, mountain sheep, foxes, and other animals in this area as well as herds of horses that graze on the tops of the gorge’s mountains. According to local shepherds, the freshest and most succulent grass that horses feed on impacts the kumys (fermented mare’s milk) taste. Local women cook kumys in special wooden-made dishes and add thyme, which grows in gorges and on the plain.

Berikkara – the birthplace of tulips, mountain scenes, and antiquity

The Zhualyn district also hosts the famous gorge Berikkara, which is located 60 kilometers from Taraz and which is officially recognized as the world’s homeland of tulips. The tulips were first sent to Holland from this place, which now exports them all over the world. Overall, there are five species of tulips, including rare species of Greig’s tulip and Tulipa kaufmanniana that are listed in the Red Book. 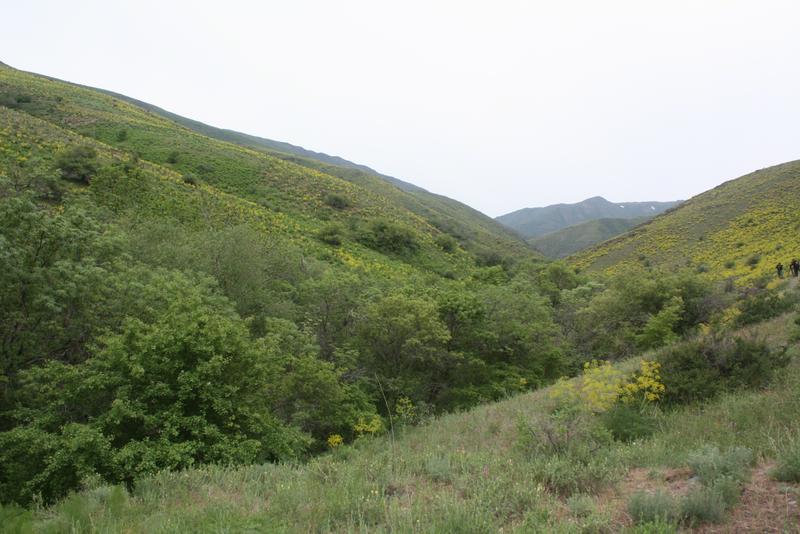 During the summer holidays, children from large and low-income families, children with physical and mental challenges, and children from orphanages come to receive treatment in local recreation areas. But everyone who wants to can come to discover the picturesque slopes of the Karatau mountains and breathe the fresh air of the Zhualyn land, which was called “a small Switzerland” by Momyshuly in one of his works.

The local flora amazes with the uniqueness of its plants: the world’s only grove of Berikkarin poplar and an ash grove from the Sogdian period were found here. As for fauna, there are such endangered animals and birds as the Karatau mountain sheep, the Indian porcupine, and the paradise flycatcher.

Near the gorge, there is a complex of 500 Saka (this culture dominated the Eurasian steppe) mounds dating back to the sixth century B.C. According to historians, the founder of the Mongol Empire Genghis Khan camped in this area with his army.

Makpal – a region of clean air and magnificent scenery

Located on the northern slope of the Kyrgyz Alatau Mountain, the Makpal gorge covers an area of approximately 20,000 hectares at 2,800 meters above sea level. It is full of broad meadows and various herbs. 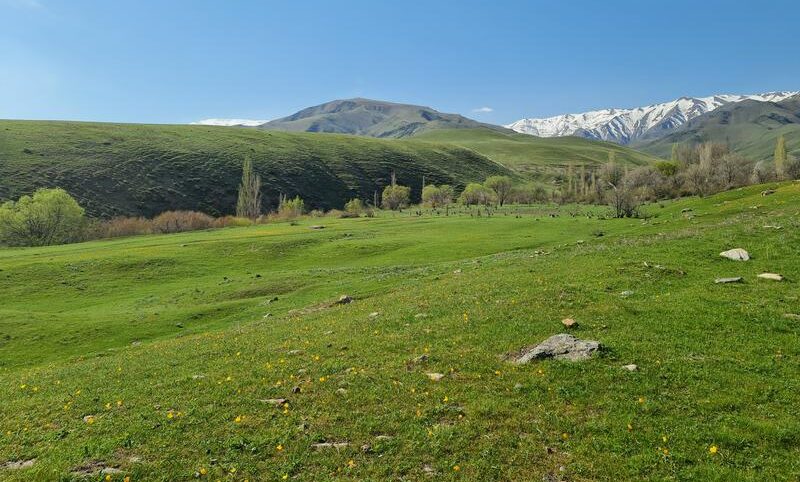 In the upper mountainous parts, there are Tugai forests of Talas and Tien Shan birches, Sievers apple tree, Regel pear, and hawthorn.

The gorge is rich with alpine and subalpine meadows, diverse ornamental and medicinal herbs, including Red Book listed, and vanishing species such as pion, cumin, and licorice among many others.