On June 21–23, Vienna will host a historic event in the field of nuclear disarmament – ​​the First Meeting of the States Parties to the Treaty on the Prohibition of Nuclear Weapons (TPNW). 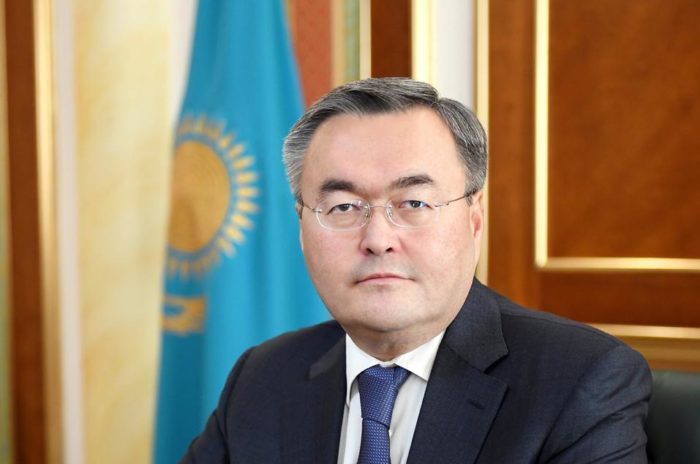 The entry into force of this treaty in January 2021 became a long-awaited signal that demonstrated the determination of the UN member states to take concrete measures to outlaw nuclear weapons.

This was a significant moment for Kazakhstan, which in the past experienced detrimental consequences of nuclear tests. As President of Kazakhstan Kassym-Jomart Tokayev noted in his speech at the 75th session of the UN General Assembly, “today Kazakhstan is an example and a role model for the whole world as a responsible state that voluntarily abandoned its nuclear-missile arsenal and closed the world’s largest nuclear test site.”

For half a century, our land suffered atmospheric, ground, and underground tests. This impacted the health of about 1.5 million Kazakhs living near the test site with an area of ​​​​more than 18,000 square kilometres. The consequences of radiation are felt to this day.

On the initiative of Kazakhstan, the closing date of the Semipalatinsk test site – August 29 – was declared in 2009 by the UN General Assembly the International Day against Nuclear Tests. Emphasizing the symbolism of this date, in 2019 Kazakhstan submitted to the UN Secretariat an instrument for ratifying the Treaty on the Prohibition of Nuclear Weapons (TPNW).

Kazakhstan voluntarily abandoned the 4th largest nuclear arsenal in the world, which it inherited after the collapse of the Soviet Union, and in 1993 joined the Treaty on the Non-Proliferation of Nuclear Weapons (NPT) as a state that does not possess nuclear weapons. Let me note, that the TPNW was developed in support of the NPT and fully complements its objective of strengthening the nuclear non-proliferation regime, the peaceful use of atomic energy and wider international security.

In fact, TPNW reflects the dissatisfaction of most UN member states with the disregard by nuclear countries of their obligations on nuclear disarmament, enshrined in several international treaties and documents, including Article VI of the NPT. For this reason, we believe that the treaty should be mentioned in the Final Document of the forthcoming NPT Review Conference in August 2022.

The Treaty establishes several mandatory legal initiatives in the field of nuclear disarmament. For example, nuclear weapons are considered illegal for the first time in human history. Secondly, the production, testing, acquisition, transfer, storage and deployment of nuclear weapons or nuclear explosive devices, as well as the use of threats to use them, are prohibited.

A nuclear-weapon country can join the TPNW if it agrees to destroy its nuclear weapons in accordance with legally binding, verifiable, time-specific plans. Similarly, a country hosting nuclear weapons can join if it agrees to remove them. The Treaty does not prescribe specific timeframes or disarmament measures, as they are planned to be approved by the member states following the First Conference of the TPNW.

Kazakhstan’s active participation gave impetus to the organisation of the First Conference of the TPNW. The most important contribution of our country to this process was acting as a facilitator of substantive solutions. In particular, at the initiative of Kazakhstan and Kiribati (which suffered 39 American and British nuclear weapon test), a working group was created to develop proposals on the issue of positive obligations in accordance with Articles 6 and 7 of the Treaty related to providing support for victims of nuclear testing and use of nuclear weapons, as well as environmental rehabilitation.

The positive obligations under the TPNW refer to the nodal aspects and are focused on eliminating damage from the use and testing of nuclear weapons in the past, as well as preventing possible damage in the future.

The medium-term goal of this initiative on the adoption of positive obligations is to establish an International Trust Fund to finance projects related to victim assistance and environmental restoration.

A specific mechanism is being discussed for identifying sources of funding (from TPNW member-states and non-member states, NGOs, philanthropists, and individuals) for work that requires special knowledge, materials, and equipment. It is important to note that this proposal has found support among the expert community and academic circles.

I would like to note that with the financial support of Kazakhstan and the UN Office for Disarmament Affairs, Kazakh people affected by nuclear testing and the youth representatives from Pacific Island countries will be able to participate in the First Conference of the TPNW and share their stories from a high international rostrum to draw attention to how deplorable the consequences of the use/testing of nuclear weapons can be.

The TPNW positive obligations are of practical value for Central Asia. In accordance with Article 7 of the TPNW, states may request the assistance of other parties to the Treaty and international structures to implement the abovementioned provisions. Considering the existing problem of uranium tailing ponds in several countries of our region, this initiative would help to attract donor funds from other states and international organisations for the reclamation of tailing ponds and the implementation of preventive measures to help the population near uranium mines.

Therefore, Kazakhstan, as the only state in the CIS region that has acceded to the TPNW, is conducting systematic work in accordance with Article 12 on the universalisation of the document to expand the membership of its participants, primarily from among the countries of the Central Asian Nuclear-Weapon-Free Zone (CANWFZ).

Let me remind that CANWFZ, established by Kazakhstan jointly with its regional neighbours through the 2006 Semipalatinsk Treaty, is the first and currently the only such zone in the Northern Hemisphere. A key addition to it was the Protocol, containing negative security assurances, which stipulates that countries possessing nuclear weapons undertake not to use them on the parties to the Treaty. In this regard, we are grateful to the United Kingdom, China, Russia, and France for completing the ratification of this important document. Last year, the foreign ministers of the states that are parties to the Treaty – Kazakhstan, Kyrgyzstan, Tajikistan, Turkmenistan, and Uzbekistan – made a joint statement on its 15th anniversary, in which they reaffirmed their unshakable commitment to its provisions and called on the United States to ratify the above-mentioned Protocol as soon as possible.

The members of nuclear-weapon-free zones around the world are at the forefront of the nuclear disarmament process. The main goals and objectives of establishing these zones are in line with the principles of the TPNW. This means that a state party to the Semipalatinsk Treaty can accede to the TPNW without assuming additional obligations. Besides, if a state that is party to the Semipalatinsk Treaty has already adopted relevant national regulatory legal acts to implement the provisions of the Semipalatinsk Treaty, then this will probably be sufficient to fulfil the obligations that the state will assume by joining the TPNW. This is confirmed by leading international NGOs and experts in the field of nuclear disarmament.

It should also be emphasized that the TPNW is gaining global popularity thanks to the efforts of civil society, which encourages governments and parliamentarians of their respective countries to accede to the Treaty. Kazakhstan welcomes the decision of several European countries (Switzerland, Sweden, and Finland), including the declared intention of NATO members (Germany and Norway), to participate as observers in the First Conference of the States Parties to the TPNW.

The Treaty is another effective platform for our efforts to build a world without nuclear weapons. Kazakhstan will continue to show an example of high responsibility to the present and future generations of humankind.

In this context, it’s worth noting the UN Universal Declaration on the Achievement of a Nuclear-Weapon-Free World, adopted at the initiative of Kazakhstan at the 70th session of the UN General Assembly in 2015. The Universal Declaration calls for the total elimination of nuclear weapons as the only guarantee against their use or threat of use. Last year, the resolution received a record number of 141 votes from UN member states, indicating its positive momentum. Particularly noteworthy was the support from India and Democratic People’s Republic of Korea, which possess nuclear weapons, as well as from Iran, which was among the co-sponsors of the resolution.

If nuclear weapons are declared to be outside of international law, the call for nuclear-weapon states to take urgent steps in the field of nuclear disarmament will increase significantly. To this end, Kazakhstan continuously encourages dialogue between nuclear countries and the TPNW supporters in order to align their views and strengthen trust between them, which is especially important given current geopolitical conditions. Such work is also being carried out within the framework of the Stockholm Initiative for Nuclear Disarmament and specialized platforms within the UN, including the First Committee of the General Assembly, where our country will take over the chairmanship during the 77th session.

The possibility of signing the TPNW and its entry into force have given many countries additional hope for a safer and rational world, which is currently in a serious crisis. As noted by the UN Secretary-General António Guterres, with about 13,400 nuclear warheads around the world, the possibility of using nuclear weapons is more real than in the darkest days of the Cold War. The current military confrontation in Ukraine, discussions about proliferation of nuclear weapons and mutual threats to use them, raise the question about the collective vulnerability of humanity and the urgent need to ban and eliminate the deadly weapons.

The practical contribution of Kazakhstan to nuclear disarmament encourages us to continue calling on nations and governments to redouble their efforts to rid our planet of the threat of nuclear self-destruction by strengthening mutual trust. With that in mind, Kazakhstan has nominated its candidacy for the position of Vice Chair of the First Meeting of the TPNW in 2022 and Chair of the Third Meeting for 2024–2026.

We call on all states, including nuclear-weapon powers, to develop a phased plan for the complete elimination of nuclear weapons by 2045, to the centenary of the UN. The proposals and agreements to achieve this goal could be reflected in the final documents of both the First Conference of the TPNW and the NPT Review Conference.

Kazakhstan realizes that there are many political and technical obstacles on the way to achieving this noble and ambitious goal. We consider it necessary to embark on a practical work in this direction.

The author is Mukhtar Tileuberdi, the Minister of Foreign Affairs of Kazakhstan.

The article was originally published in Modern Diplomacy website.