NUR-SULTAN – As of 12.00 a.m., over 40 percent of Kazakh citizens received their ballots to vote. According to the member of Kyrgyzstan’s Central Election Commission Abdyzhappar Bekmatov, the people of Kazakhstan realize the importance of this referendum, as it will determine the future trajectory of the country’s development. 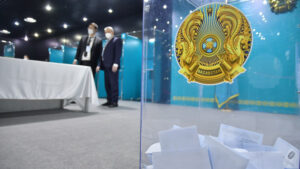 Bekmatov noted that Kazakhstan has done tremendous work to prepare and organize this historical referendum.

“A great deal of work has been done to organize the referendum. In particular, I would like to note a high level of the media and government institutions’ work in informing citizens about the referendum and the amendments that will be made to the Constitution of Kazakhstan,” said Bekmatov.

As part of the delegation of international observers, Bekmatov was able to visit a few polling stations in Nur-Sultan. According to him, the capital’s residents are in high spirits and they come with their families to vote.

“Such a high activity among the capital’s residents is understandable. I am sure the people of Kazakhstan realize the importance of this referendum because its results will have a tremendous effect on the Constitution of the country. This referendum’s outcome will determine the future trajectory for the country’s development,” he added.

Kazakhstan’s Central Referendum Commission was tasked to ensure that each citizen eligible to vote, particularly those with disabilities, had fair and equal access at polling stations. The commission obliged each polling station to have handrails, decking, ramps, and other tools in place.

According to Bekmatov, 15 citizens of Kyrgyzstan are members of different international organizations such as the Shanghai Cooperation Organization (SOC) and the Commonwealth of Independent States (CIS). They are working in Almaty, Nur- Sultan, and other regions of the country.