Outcome of Referendum Reinforces Kazakhstan’s Position Both in Region and in the World, Says SCO Secretary-General

By Aida Haidar in Constitutional Referendum, Nation on 7 June 2022

According to the preliminary results, 77.18 percent of citizens voted in favor of the Constitutional amendments. The overall turnout was more than 68 percent.

The SCO mission included 17 experienced observers – representatives of both the legislative and executive bodies of the SCO Secretariat. The mission met with representatives of the Central Referendum Commission of Kazakhstan and observed the voting at the polling stations of Nur-Sultan.

According to Ming, Kazakhstan created all the conditions for holding a referendum on amendments to the Constitution. All the requirements of the electoral legislation and the country’s international obligations were met.

“The mission has not observed any violations of the norms of national legislation that could have cast doubt on the legitimacy of the referendum. The mission recognizes the recently held referendum as open, transparent and democratic,” he added.

Commenting on the impact of the referendum results on Kazakhstan’s role within the organization, Ming said that Kazakhstan, as one of the founders of the SCO, has always played and will continue to play an important role in the work of the alliance.

“The results of the referendum only reinforce the position of Kazakhstan both in the region and on the world stage. The role of the ‘New Kazakhstan’ in the SCO will be more visible and active,” said Ming.

In his closing remarks, the SCO Secretary-General expressed his gratitude to the Kazakh Ministry of Foreign Affairs and the Central Referendum Commission for their assistance in observing the referendum. 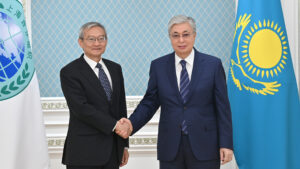 During their meeting on June 3 in Akorda, President Kassym-Jomart Tokayev and Secretary-General of SCO Zhang Ming discussed Kazakhstan’s cooperation with the SCO in such areas as regional security, trade, and economics. They also touched upon key aspects of the Organization’s activities in the current geopolitical situation. The SCO Secretary-General also informed Tokayev on the upcoming SCO Summit, which is scheduled to be held in September in Samarkand. Photo credit: Akorda