By Zhanna Shayakhmetova in International on 20 June 2022

NUR-SULTAN – Kazakhstan and Iran agreed to increase mutual trade, strengthen trade and economic cooperation in transport, logistics, manufacturing, and agriculture, and expand cultural and humanitarian ties. This was announced during the meeting between President Kassym-Jomart Tokayev and Iranian President Ebrahim Raisi in Tehran on June 19, reported Akorda. 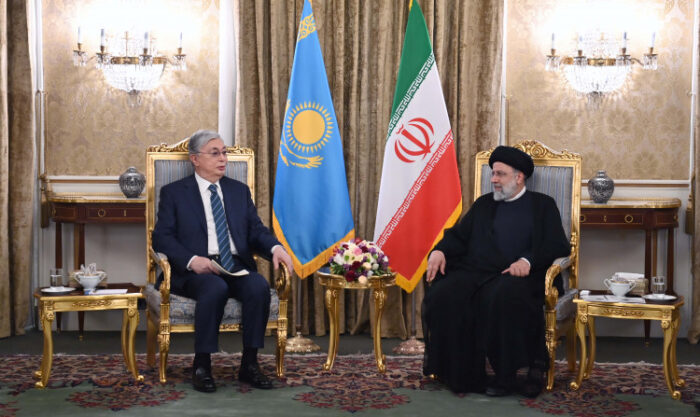 As part of his official visit to Iran, Tokayev took part in the online launch ceremony of the first container train from Kazakhstan through Iran to Türkiye.

“We are friendly neighbors living near the Caspian Sea, and our history, culture and traditions have much in common. Many Kazakh people found shelter in the hospitable Iranian land during the famine. We will always remember and be grateful to all the Iranian people for this,” Tokayev said during the briefing.

The agreement for the use of the transport and transit potential between the two countries is an important one, noted the Kazakh President. The transport corridor will connect the northern and southern, western, and eastern directions. 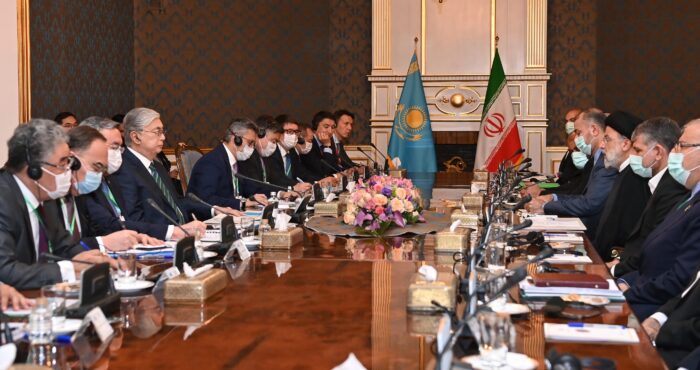 “Today we saw a container train that left Kazakhstan a week ago, and arrived here. This is a major event during difficult geopolitical conditions. We also discussed cooperation in agriculture, industry and transit traffic. I believe these areas will give a new impetus to Kazakh-Iranian relations, and the agreements will further strengthen cooperation between our countries,” Tokayev said.

The President of Iran noted the potential opportunities have not yet been fully realized despite the 30th anniversary of the diplomatic relations between the countries.

“The agreements will open up new opportunities for our countries. We should bring mutual trade to $3 billion. We have a potential for cooperation. I believe today’s talks will become a solid foundation for close cooperation between our countries,” said Raisi.

In addition to the establishment of joint chambers of commerce, Kazakhstan will introduce a visa-free regime for Iranian citizens for 14 days. This will expand cooperation among business people and attract tourists.

The agricultural sector is one of the main directions in the economic cooperation between the two countries. Tokayev noted the activities of Iranian companies in Kazakhstan which are involved in cattle breeding, meat processing, dairy production, and rice cultivation. Kazakhstan is also ready to expand the range of domestic agricultural products for export to Iran.

“We have established a constructive political dialogue based on good neighborliness and strong friendship,” Tokayev said as he welcomed the Iranian delegation during the meeting. “More than 60 contracts have been signed. The intergovernmental economic commission has been operating. Inter-parliamentary relations have been established, inter-regional cooperation is being strengthened, and close cooperation has been established as part of the international organizations.”

The Kazakh President expressed interest in implementing joint projects in the light industry and the agri-industrial sector.

Cultural cooperation plays a special role in strengthening Kazakh-Iranian relations, said Tokayev. The Kazakh diaspora in Iran serves as a connecting link between the peoples of the two countries. The countries now have prospects for strengthening cooperation in the study of history and the exchange of historical data.

During his visit, Tokayev met with the Supreme Leader of of Iran Sayyid Ali Hosseini Khamenei to discuss the prospects of the Kazakh-Iranian relations.