Kazakhstan Оffers the West Strategic Opportunity: Will It Seize It?

By Aida Haidar in International on 25 June 2022

NUR-SULTAN – In today’s world marked by a geopolitical power shift, the collective West should see Kazakhstan as an opportunity. That was a cross-cutting theme of the conference at Brussels Press Club dedicated to the release of a new report titled Kazakhstan Offers the West a Strategic Opportunity authored by Dr. John C. Hulsman, a board member of the Aspen Institute Europe and the founder of John C. Hulsman Associates. 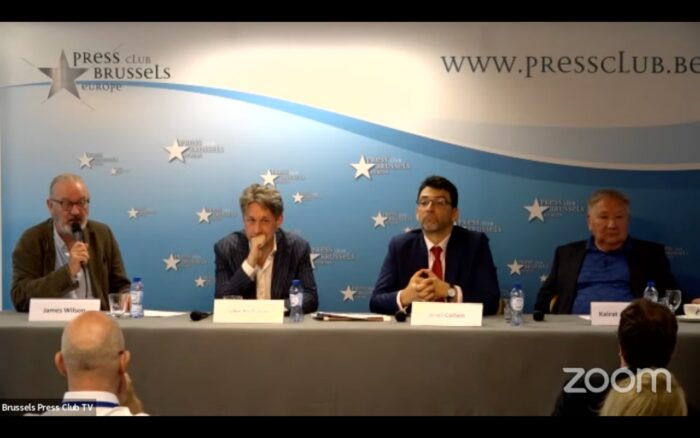 Foreign experts stressed that Kazakhstan surprised the world with its quick re-emergence after the tragic events of January. Not only did the country’s leadership deliver on its promise of new far-reaching reforms but also demonstrated an independent foreign policy.

In his welcoming address, the author of the report on Kazakhstan Dr. John C. Hulsman said Nur-Sultan asserted its political will for change in the recently held constitutional referendum.

“The referendum has gone forward, getting rid of the super presidential system, and moving to a system that is more representative at the local level. President Kassym-Jomart Tokayev went forward. In other words, they’re following through on what they say,” Hulsman said.

Veteran Kazakh diplomat Kairat Abusseitov, who is also head of international programs at the Nursultan Nazarbayev Foundation of Kazakhstan, addressed the “multilateral democratic and foreign policy” which he compared to an artist performing on a gymnastics beam.

“We still need to do a lot to stay on that beam and striking a balance on that beam is not easy. This has become even more difficult in today’s world, but this is a key element of our government policy and all the more important as challenges are coming every day,” said Abusseitov.

Foreign experts praised Kazakhstan’s efforts not only in political reforms but also in economics. According to the Director of the Energy, Growth and Security Program at the International Tax and Investment Center in Washington, D.C Ariel Cohen, the country’s destiny is to remain on the path of progress, and it is “in the vanguard of economic reform, ahead of Russia, in that part of the world.”

“Kazakhstan is in the vanguard of economic and political change in Central Asia. But it must now forge ahead and capitalize on its multivector foreign policy,” he said.

Cohen pointed out that the conflict in Ukraine is putting into question the whole post-Soviet transition model and brings clarity in terms of where Russia is going. According to him, the economic sanctions that were imposed on Russia will remain in place for the foreseeable future.

“So, in that respect, Kazakhstan has quite a lot to offer to Europe and to the world. Because European countries and any country need what we call in the business a ‘base-load of energy’,“ said Cohen, hinting at the vast resources Kazakhstan could provide the western partners with.

He also noted Kazakhstan is a strong ally not only on the energy front but also in transportation corridors, food supplies, and “the transition from Russian gas.”

“Kazakhstan has a lot of coal and can also export a lot of wheat and this will be important,” he added.

However, for all of these plans to be realized Kazakhstan must keep its territorial integrity, which, according to Cohen, is in the common interest of the world.

“We need to watch what Russia is doing in ethopolitics and with its rhetoric. The talk about the alleged discrimination of Russian speakers in Kazakhstan has no base in reality whatsoever. I have been to Kazakhstan many times, I speak Russian myself, I talk to Russian speakers there, they are not discriminated against based on the language,” said Cohen.

In his welcoming remarks, Vassilenko said that Kazakhstan is ready for a constructive partnership in the energy sphere. The country can help Europe to recalibrate its “suicidal energy policy,” as one of the participants of the conference described it.

“Kazakhstan holds more than 41 percent of the world’s uranium supplies. The European Union is the world’s largest nuclear energy consumer, accounting for 25 percent of global consumption and Kazakhstan supplies 21 percent of it. In this regard, we are ready to supply our partners with uranium as well as with oil,” said Vassielnko.

According to the deputy foreign minister, in the context of changing geopolitical realities, the transit potential of Kazakhstan has become evermore of interest. He mentioned that earlier this year Kazakhstan along with Turkey, Georgia and Azerbaijan signed a quadrilateral declaration on the Trans-Caspian East-West Middle Corridor. According to him, it can facilitate high-quality intermodal transport and logistics services to cargo going from China to Turkey, the Black Sea ports, and Europe.

Vassilenko also touched upon Kazakhstan’s model of multivector foreign policy, which he said “is the only way forward” for the country.

He also said Kazakhstan is ready to contribute in any way to help end the conflict in Ukraine, as well as provide support to international partners with political and humanitarian engagement in Afghanistan. Stressing a rising need to deepen regional cooperation, Vassilenko echoed his colleague’s analogy of multivector foreign policy, but he also compared it to a “tightrope which is becoming ever more narrow.”

“To develop this approach we need far greater engagement with Kazakhstan and not just from our neighbors, but also the EU and the United States. Kazakhstan extends its hand to the West and it is now important that this hand is shaken back in return. There needs to be more concrete action and for people to put money where their mouth is,” he concluded.