By Aida Haidar in Constitutional Referendum, Nation on 6 June 2022

NUR-SULTAN – On the day following Kazakhstan’s national referendum on the proposed Constitutional amendments, international observation mission heads and delegates shared their views on the voting procedure and citizen participation.

“The referendum on amendments to the Constitution of Kazakhstan was held at a high organizational level,” said the head of CIS Observer Mission Leonid Anfimov at the Central Referendum Commission briefing on June 6. Anfimov also noted the significant turnout among Kazakh citizens. 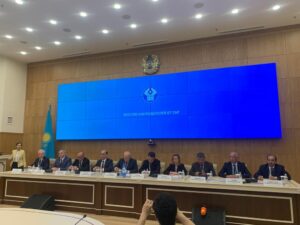 The mission representatives observed the voting and counting procedure in Akmola, East Kazakhstan, West Kazakhstan, Karaganda regions, in the cities of Nur-Sultan, Almaty, and Shymkent, as well as at 17 foreign polling stations in Ankara, Baku, Moscow, Ottawa, Beijing and many other cities across the world. In total, the CIS mission observers visited more than 800 referendum polling stations. Anfimov noted the vote-counting procedure was held in accordance with the legislation on the referendum.

“Observers were provided with a complete overview of the actions of members of precinct commissions,” said Anfimov.

However, the CIS observers noted a few minor violations. According to Anfimov, they were of a technical rather than fundamental nature.

“In the opinion of the mission, they could not have influenced the results of the referendum,” he added.

As an example, Anfimov provided a case when a husband and wife entered the voting booth together.

“The Central Referendum Commission administered the referendum impartially and met the legal deadlines. Public meetings were conducted in an efficient and collegial manner and were open to the media,” said Gizmat Gozalov, an international observer from the Organization of Turkic States, at a briefing held for foreign media.

The mission was composed of officials from the Secretariat of the OTS, and the Turkic Chamber of Commerce and Industry (TCCI) carried out its activities in accordance with the national legislation of Kazakhstan as well as generally recognized rules of international law on the organization of voting processes.

According to Gozalov, the local commissions worked in a professional way.

“10 out of 15 of the observed referendum boards were chaired by women,” he added.

Commenting on the organization of the Constitutional referendum, Gozalov said it was well-organized and professionally administered, without any significant irregularities. Voting and counting procedures were followed, and the transparency of the process was ensured.

At the same time, the mission advised the appropriate government agencies of Kazakhstan to review the practice of including voters who wish to vote in any polling station outside their permanent registration to a supplementary voter list on voting day.

Gozalov expressed hope that this transition to a more democratic model of governance and a new format of interaction between the state and society would further contribute to increasing the public welfare in the country.

“The referendum was held in compliance with international norms and in the spirit of fairness, transparency, and neutrality,” said the member of the international observer mission of the TURKPA Recep Sheker, who is also a deputy of the Turkish Grand National Assembly, at the briefing on June 6. 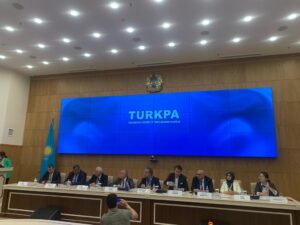 The mission notes that the referendum proceeded in a calm manner and the work at the polling stations was organized at the highest level. Sheker particularly praised the conditions for people with disabilities which were in place at the referendum across Kazakhstan.

“Our delegation appreciates the fact that most polling stations were appropriately equipped with assistive devices for voters with visual impairments as well as for voters with other disabilities,” he added.

According to Sheker, Kazakhstan has begun implementing important reforms that will be consequential for its future.

“These changes to the Constitution, I think, will benefit the entire country and will improve the socio-economic opportunities of Kazakh people,” Sheker concluded.