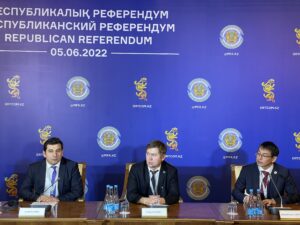 As of 12 p.m. today, 43.7 percent of citizens eligible to vote participated in the referendum.

“The Central Election Commission and other state bodies comply with all regulations. The Turkic Academy observes the referendum with high interest,” Majidli told the press briefing today, saying that no violations were recorded.

As part of the delegation of international observers, the International Turkic Academy visited nine polling stations in the capital of Kazakhstan in the first half of the referendum day and it will continue its observing mission until the closure of polling stations at 8 p.m. According to Majidli, the Turkic speaking community is closely watching the process that is now taking place in Kazakhstan.

“There is a great interest in the Turkic countries, especially from the expert community. Why there is such an interest in what is happening in Kazakhstan today? Well, Kazakh citizens are voting on a considerable package of reforms and Turkic-speaking countries are curious about how Kazakh people will vote,” he said.

According to Majidli, the Turkic Academy invests all its efforts in coordinating scientific and humanitarian cooperation in the Turkic world.

“In the conditions of geopolitical instability, the unity and solidarity of the Turkic speaking countries must be strong,” Majidli added.