By Assem Assaniyaz in International on 4 June 2022

NEW DELHI – A sculpture of the great Kazakh poet and philosopher Abai Kunanbayev was unveiled June 2 in New Delhi to mark the 30th anniversary of diplomatic relations between Kazakhstan and India, reports the Kazakh Foreign Ministry press service. 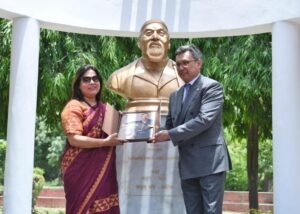 Lekhi and Sultanov at the opening ceremony of a sculpture of the Kazakh poet Abai Kunanbayev. Photo credit: Kazakh Foreign Ministry

Deputy Prime Minister – Kazakh Minister of Trade and Integration Bakhyt Sultanov, who visited India as a co-chair of the 14th session of the Kazakh-Indian Intergovernmental Commission, and Indian Foreign Minister Meenakshi Lekhi attended the ceremony in the San Martin Park in the country’s capital.

“Abai is not only a great poet but also a brilliant thinker, an outstanding educator. Therefore, the installation of the bust of Abai here, in the homeland of Mahatma Gandhi, has a deep symbolic meaning. I am convinced that all these steps will contribute to the strengthening of spiritual cooperation between the two countries,” said Sultanov.

As part of the event, the Kazakh Embassy in India presented the Kazakh literature masterpiece written by Abai more than a century ago – “Words of Edification,” which was translated by the Indian Council for Cultural Relations (ICCR) into Hindi.

During the negotiations with Kazakh Deputy Foreign Minister Adil Tursunov, Lekhi and the Indian Foreign Ministry Secretary Sanjay Verma confirmed India’s readiness to support the transformation of the Conference on Interaction and Confidence-Building in Asia (CICA) into a full-fledged international organization and expressed the country’s interest in the CICA Summit this autumn in Nur-Sultan.

Lekhi also shared her plans to visit Kazakhstan, highlighting the importance of a strategic partnership between the two countries.