NUR-SULTAN – Kazakhstan will continue fulfilling its plans to reduce its carbon use and undertake more efforts to improve the investment climate, said President Kassym-Jomart Tokayev as he chaired the 34th plenary session of the Foreign Investors Council on June 10, reports the presidential press service.

Founded in 1998, the council has served to provide a direct dialogue with investors operating in Kazakhstan. Photo credit: Akorda

Heads of major multinational companies working in Kazakhstan, government agencies, and representatives of international organizations attended the event. Founded in 1998, the council has served to provide a direct dialogue with investors operating in Kazakhstan. 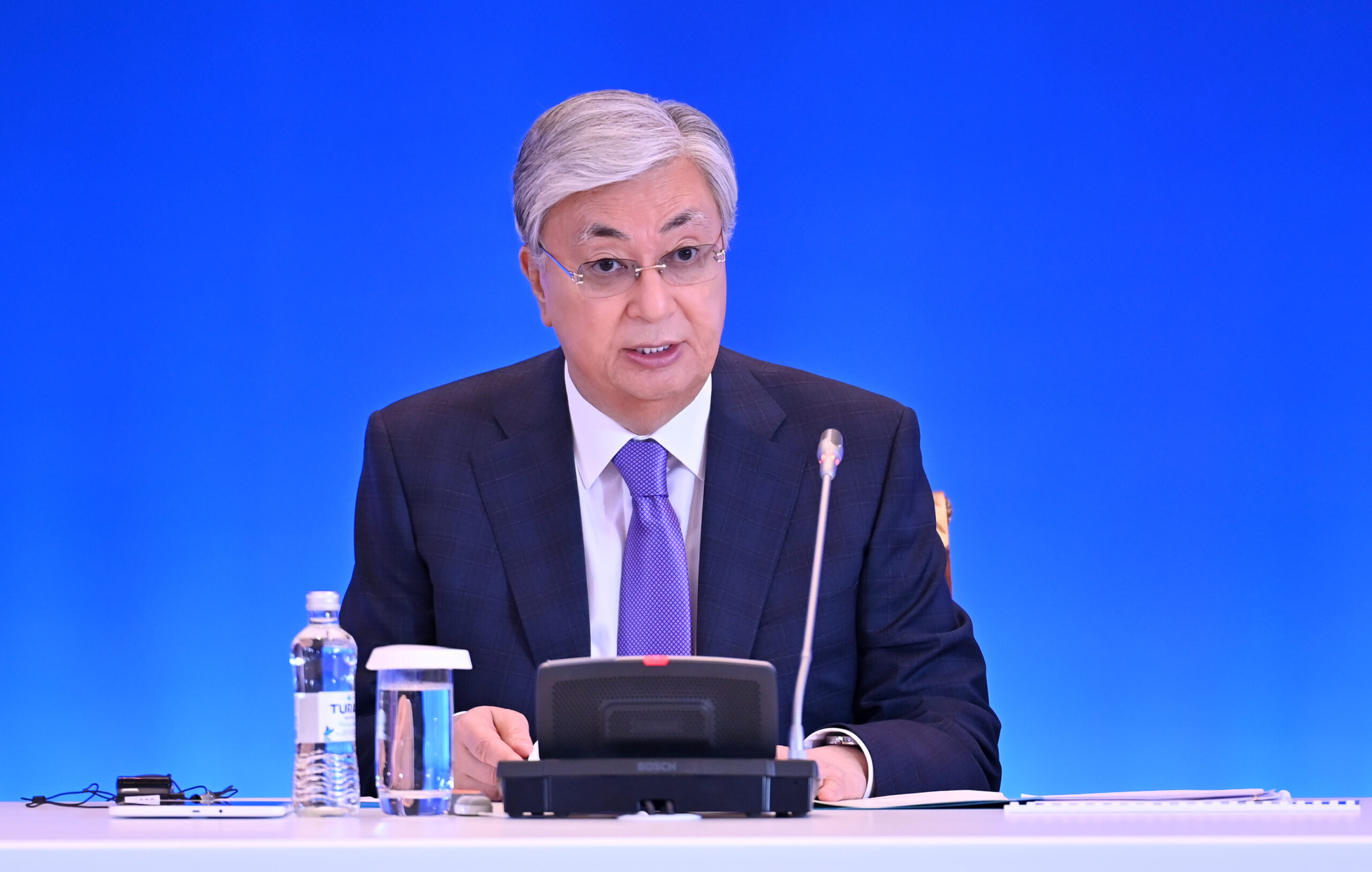 Improving the investment climate has been a priority for the government of Kazakhstan. The country’s new investment policy until 2026 adapts to the current trends in the global market, including environmental, social, and governance (ESG) criteria.

Tokayev said that foreign direct investment reached nearly US$24 billion in 2021, 38 percent more than a year before.

“It is noteworthy that more than 60 percent of foreign investment is in the non-primary sector of the economy. We value these investments very much, and we will do our utmost to reciprocate all our obligations to our foreign partners without fail. Kazakhstan will continue strengthening the policy of open doors for investors,” said Tokayev.

The improvement of the system to protect the legal rights of investors is a priority task for Kazakhstan, said Tokayev, emphasizing the country’s readiness to create all institutional conditions for the establishment of direct cooperation with foreign companies, including through their relocation to Kazakhstan or the opening of joint ventures.

“We are aimed at developing innovations and increasing the level of human capital in the country. I believe that the Foreign Investors Council should play a role here, especially in terms of finding mutually beneficial solutions and sharing experience in relevant areas of cooperation. The government, together with the council, should analyze and develop practical measures to address these issues,” he said.

The work to improve the investment climate will be accompanied by large-scale reforms – developing fair competition, reducing corruption, increasing the effectiveness of public administration, improving the quality of human capital, and reforming the judicial system.

According to him, political reforms should go hand in hand with economic reforms. This will allow Kazakhstan, Central Asia’s largest economy, to escape the so-called middle-income trap, a situation where a middle-income country fails to transition to a high-income economy due to rising costs and declining competitiveness. Few countries have managed this transition.

“That is why we are implementing a new economic course aimed at building a truly free and competitive economy,” said the President.

He noted that the tense international situation became a reality forcing countries to adapt to the “new rules of the game. “Breakdown of global supply chains, trade wars, unprecedented inflationary pressure – all this is an objective reality of our days,” said Tokayev.

In December 2020, Kazakhstan announced its pledge to achieve carbon neutrality by 2060. This commitment becomes particularly urgent given the obvious impact of climate change on economies, including the risks of declining wheat yields and the shortage of water resources.

Kazakhstan is now developing its low carbon development strategy, which provides for significant economic, technological, and social changes. It is expected to be adopted by the end of this year.

Tokayev clarified that 80 percent of all greenhouse gas emissions in Kazakhstan are generated from the production of fossil fuel energy, and reversing the adverse impact will require modernizing the country’s energy sector.

He also called on the government to revise the national emissions trading system to bring it into line with the European one. The system, which is also known as “cap and trade,” is a cost-effective way of reducing greenhouse gas emissions.

“We should revise the methodology for calculating specific coefficients on greenhouse gas emissions and tighten them. The calculation approach should be similar to the European approach – based on the 10 best enterprises in the industry. It is necessary to take into account not only the main but also auxiliary types of production, as well as to expand the coverage of economic sectors similar to the European Union Emission Trading System,” said Tokayev.

The EU seeks to reduce greenhouse gas emissions by 55 percent by 2030 and achieve carbon neutrality by 2050. This pledge might also affect the competitiveness of Kazakh exporters, said Tokayev, who will have to pay a border carbon tax to the EU budget starting from 2026.

The nation’s new Environmental Code adopted in July 2021 is also designed to help the country in this big energy transition.

The document provides an opportunity for enterprises to modernize production through full exemption from environmental payments. At the same time, large industrial enterprises are obliged to install automated emission monitoring systems by Jan. 1, 2023.

Kazakhstan’s transition to low carbon development will also benefit from the growing potential for the development of alternative energy. The task has been set to bring the share of renewable energy in the country’s energy balance to at least 15 percent by 2030. In 2020, Kazakhstan passed the three percent threshold.

Given the instability of renewable energy and limited gas production, Tokayev also emphasized the importance of nuclear energy. He said that the government has determined the location for a potential nuclear power plant and is now studying the technology.