NUR-SULTAN – Kazakhstan and China celebrated their commitment to productive bilateral relations, which mark their 30th anniversary this year, said Chinese State Councilor and Foreign Minister Wang Yi during his four-day visit to Kazakhstan. 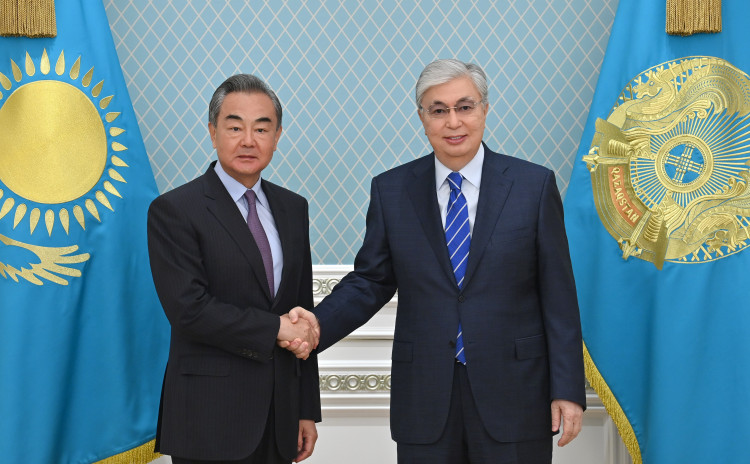 Wang met President Kassym-Jomart Tokayev and Deputy Prime Minister and Foreign Minister Mukhtar Tileuberdi to discuss the bilateral ties which have been growing since the establishment of diplomatic relations on Jan. 3, 1992.

“This year marks a very important and significant event – the 30th anniversary of the establishment of Kazakh-Chinese diplomatic relations, as well as the anniversary of the 20th National Congress of the Chinese Communist Party. I hope that the upcoming high-level talks will open a bright new page in our strategic partnership,” said Tokayev, emphasizing Kazakhstan’s commitment to deepening comprehensive cooperation with its neighbor.

He said the state visit of Chinese President Xi Jinping to Kazakhstan scheduled for autumn will give a powerful impetus to the development of Kazakh-Chinese relations.

“The results of the referendum indicate that the measures taken under your leadership to comprehensively modernize the state enjoy the broad support of citizens. This is extremely important for the construction of a New Kazakhstan and creates a solid foundation for the future development of the country,” said Wang.

Tileuberdi said Kazakhstan and China have reached the level of all-around strategic partnership. He emphasized the importance of undertaking joint efforts to stimulate mutual trade, strengthen cooperation in the transit-transport and logistics areas, and resume people-to-people exchanges and passenger air traffic.

Hopes for increasing people-to-people and business exchanges are particularly high, as regular air travel resumes. Flights are to be operated by Kazakhstan’s Air Astana and China Southern Airlines.

“The COVID-19 pandemic had its negative impact at the global level. We are currently curbing the pandemic through mutual partnership and support. A vivid proof of this is the restoration of regular flights between Kazakhstan and China from June 1, 2022,” said Tileuberdi at a press briefing following their meeting.

Minister Wang also attended the third China+Central Asia (C+C5) foreign ministers’ meeting in Kazakhstan on June 9. It is the third meeting of the group since July 2020 and their second in-person meeting since May 2021.

In January, the countries convened virtually for a summit commemorating the 30th anniversary of the establishment of diplomatic relations.