By Aida Haidar in International on 23 June 2022

NUR-SULTAN – “Even during the Cold War, the United Nations was much more united than now,” said President Kassym-Jomart Tokayev during a special panel session titled “In Conversation” with President Tokayev at the Qatar Economic Forum on June 21. 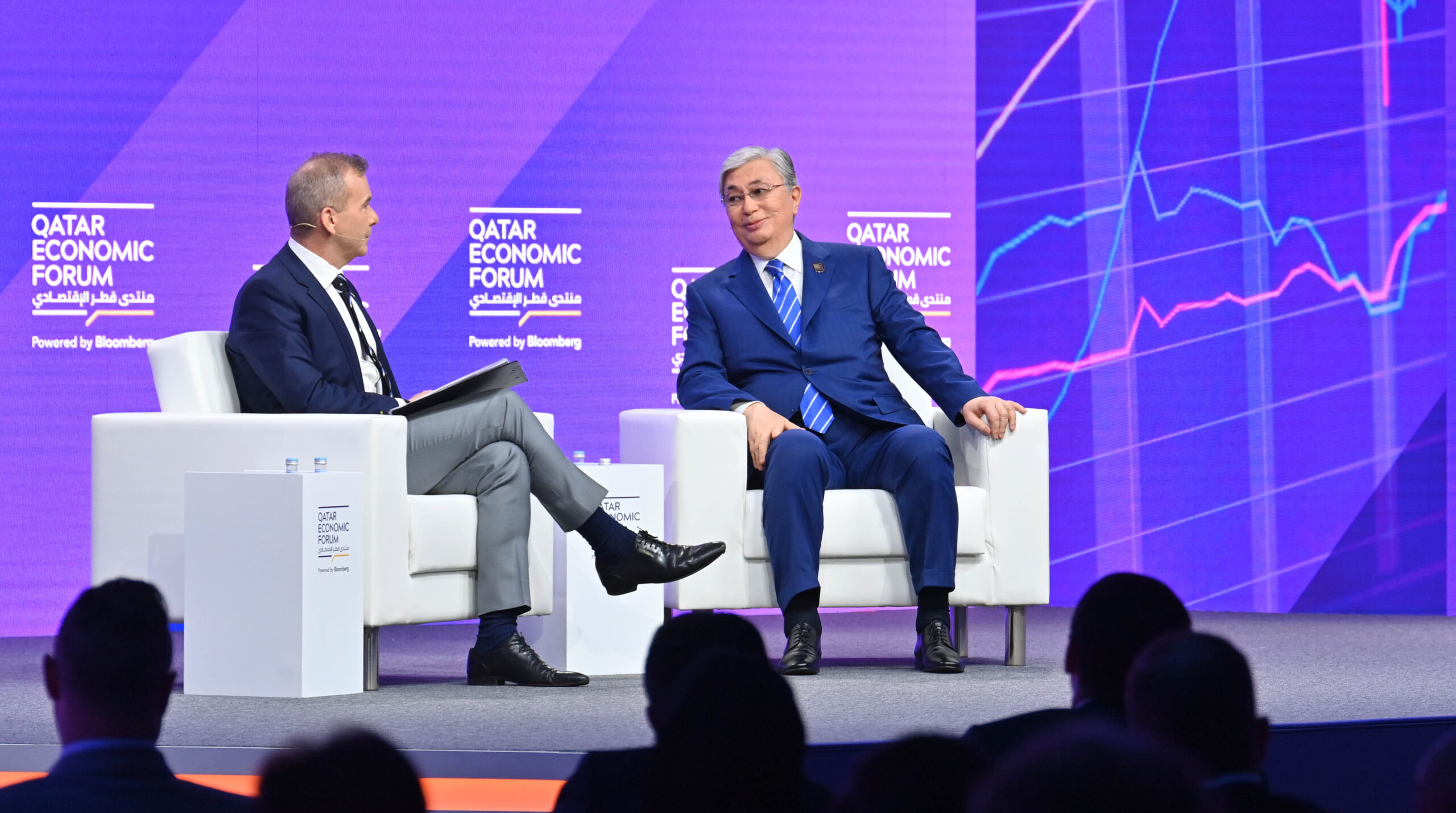 In a candid Q&A session with Bloomberg’s co-anchor Manus Cranny, the Kazakh President gave comprehensive answers to questions concerning pressing challenges in international politics such as the Russian-Ukrainian conflict and its implications on the global energy market.

The Russian-Ukrainian conflict took center stage at the Q&A session. Answering a question about what would bring the end to the conflict, President Tokayev said both a continuation of the negotiation process as well as the goodwill of both states would play a critical role in the conflict’s resolution. He also expressed concern about the inability of such important political mechanisms as the United Nations Security Council to resolve the conflict.

“Even during the Cold War, the UN was much more united than now. I am very much concerned about what will be happening with the UN in the future. However, I am a strong believer in multilateralism. I do believe that the international community must get together to show its solidarity, and, of course, to put our positive influence on both states, so that we could bring them together to come to peace,” President Tokayev said.

When asked to comment on his statement at the St. Petersburg Forum that Kazakhstan will not recognize the self-proclaimed independence of the Donetsk and Luhansk regions of Ukraine, President Tokayev stressed that Kazakhstan in its decision is guided by the major principle of the charter of the UN. “From my point of view the territorial integrity of the states must prevail,” he said.

President Tokayev also discussed the effects that sanctions on Russia have had on Kazakhstan’s economy. He said the country is already experiencing some negative effects, however, he is staying optimistic about the future.

“We do feel some negative effects with regard to our economy. That is why we insist on having more active international cooperation so that we can find a way to get out of the crisis. Perhaps you know about the Chinese formula of the crisis? It means that a dangerous situation carries a lot of opportunities in itself,” he said.

Answering a question about whether Kazakh oil is still in demand on the world market since most of it is transported through Russian territory, President Tokayev said that so far Kazakhstan has not experienced any difficulties with oil demand.

But in view of geopolitical tensions, the country is looking for ways to diversify its international trade routes. He mentioned an agreement signed with Iran, which is aimed at strengthening the transit capacity along railway corridors.

President Tokayev also hinted that Kazakhstan was ready to put out more oil to the world, stressing that the country had not reached a maximum in its oil production, which, according to the President, is currently about 100 million tonnes.

Asked about his thoughts on the upcoming July visit by U.S. President Joe Biden to Saudi Arabia and alleged misunderstandings between the two countries, President Tokayev said with an ironic smile that he wants a “friendly and predictable” relationship with the United States, a comment met with laughter and applause from the audience.

On a serious note, a moment later, President Tokayev said the visit of President Biden to Saudi Arabia would be an event of pivotal importance.

“It will have a decisive impact on the global oil market and, of course, we will closely follow the process of negotiations that will take place in Saudi Arabia. I think it is a major event as far as the international oil market is concerned,” he said.

Commenting on whether President Putin has plans to cut off gas supplies to Europe, President Tokayev said that “from his perspective, Putin has no such plan.”

“If you remember in St. Petersburg, he confirmed once again that his strategy will be to continue gas deliveries from Russia to any buyer in Europe,” he said.

Answering a direct question from the journalist, Tokayev confirmed that he views Putin as a staunch ally of his country. “As President of Kazakhstan, of my country, I am very much pleased to have a close relationship [with him],” Tokayev concluded.