The Spiritual Diplomacy of Kazakhstan and the Upcoming 7th Congress of Traditional Religions: Protecting Peace Religiously

Kazakhstan is living a rich religious life: the Moslems on May 2 started celebrating the holiday of Oraza Ait (the Kazakh name of Eidal-Fitr), while the second largest religious group in the country, the Orthodox Christians, continue the period of celebrations that followed the Orthodox Easter (it fell on April 24 this year). 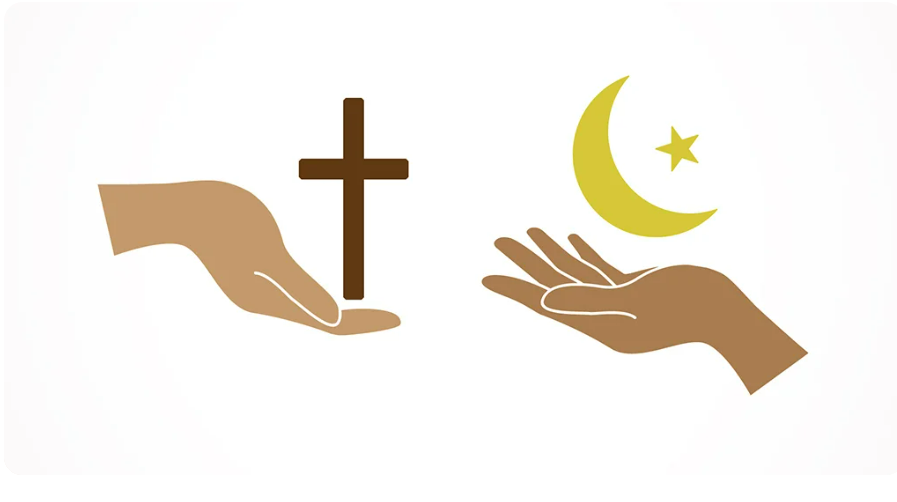 There are approximately 18 confessions in Kazakhstan, according to the Ministry of Information and Social Development of Kazakhstan. Photo credit: zen.yandex

What the two traditions have in common is the belief that this time of the year is seen as the time for mutual respect and mercy, forgiveness and solidarity. So, it is no coincidence that precisely in this period Kazakhstan got more active with its policy of “spiritual diplomacy”. Fulfilling the order of President Kassym-Jomart Tokayev, which back in 2021 started preparations for the Seventh Congress of Leaders of the World and Traditional Religions in Kazakhstan, diplomats and religious leaders are “mending fences” worldwide, spreading the ideas of peaceful resolution of conflicts and disagreements.

In this spirit, Kazakhstan’s ambassador in Moscow Yermek Kosherbayev  met on May 1 the Patriarch of Moscow and All of Russia Kirill, the spiritual leader of Orthodox Christians of Russia. The Patriarch agreed to take part in the Seventh Congress, which is scheduled for 14-15 September, 2022, and will be held in Nur-Sultan. The promise to come was made at the end of 2021 and it was confirmed now. 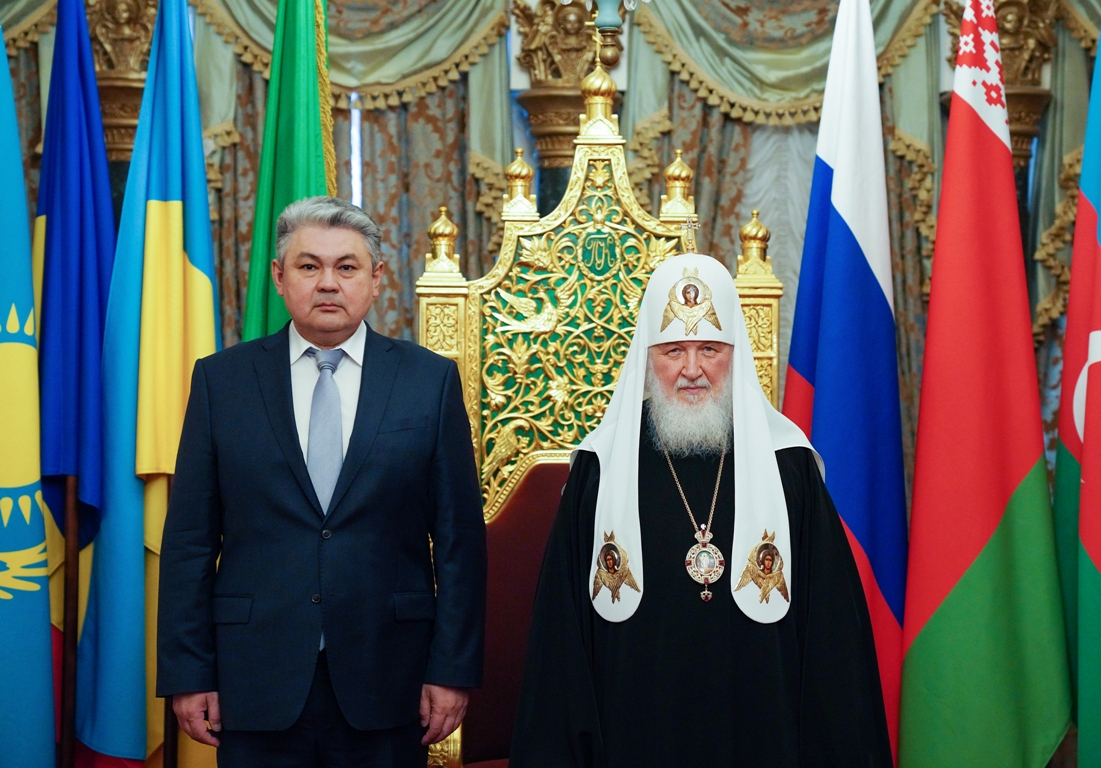 Yermek Kosherbayev with Patriarch of Moscow and All of Russia Kirill during May 1 meeting. Photo credit: Kazakh Embassy in Russia

The Patriarch’s coming created one of the main intrigues around the Congress.  For months until the end of April, the press of the world had been speculating  about the possible meeting at the Congress between the Patriarch and Pope Francis, the head of the Roman-Catholic church. (The Pope also agreed to take part in the Congress.) It was stated in both Rome and Moscow that Kazakhstan offered the best possible venue for the meeting of the leaders of the world’s most influential churches. Catholic and Orthodox Christians, however, had been separated by the “great schism” since the middle of the XI century – for almost 1000 years – and Kazakhstan with its multi-million Orthodox community and 200.000 Roman Catholic citizens presented a unique opportunity.

Many expected a joint appeal for peace from Patriarch Kirill and Pope Francis. Coming from the land of Kazakhstan, such an appeal for peace and harmony between Russia and the West would be especially welcome now, when the world is watching with horror the ongoing conflict in Ukraine.

Unfortunately, in his recent interview to the Italian newspaper Corriere della Sera Francis announced the cancellation of the meeting.

In this situation, Kazakhstan’s ambassador in Moscow Yermek Kosherbayev had a delicate mission, when he visited Patriarch Kirill, who confirmed his intention to visit Kazakhstan. Obviously, the Patriarch’s visit will be seen as a victory for Kazakhstan’s “spiritual diplomacy”. Ambassador Kosherbayev showed his mastery in the use of spiritual diplomacy:  avoiding the “language of politics,” as the Pope had said, he concentrated his conversation on “healing the wounds and relieving passions”. This attitude was welcomed by Patriarch Kirill.

The head of Russian Orthodox church’s “diplomatic service” Metropolitan Ilarion bemoaned the fact that the opportunity for a historic meeting in Kazakhstan  was missed.

By the way, Metropolitan Ilarion is a member of the Council of Religious Leaders, a permanent consultative body created in Kazakhstan after The First Congress of the World’s Traditional Religions (it was attended by delegations from 23 countries, later that number grew to 46 countries at the 6th Congress in 2018).

“Kazakhstan, as well as Russia, presents an example of remarkably peaceful coexistence and successful cooperation between several religious traditions,” Metropolitan Ilarion said, speaking in his capacity of the Head of the Department of External Relations of the Russian Orthodox Church. “The country’s spiritual life is lifted by two wings: the traditional Islam, to which at least 70 percent of the country’s population belong; and Christian Orthodoxy, the spiritual legacy of several million Russians and other Slavs living on the territory of Kazakhstan. There are other religious traditions present in Kazakhstan, and they all live in peace and harmony thanks to the wise policy of state in this sphere.” 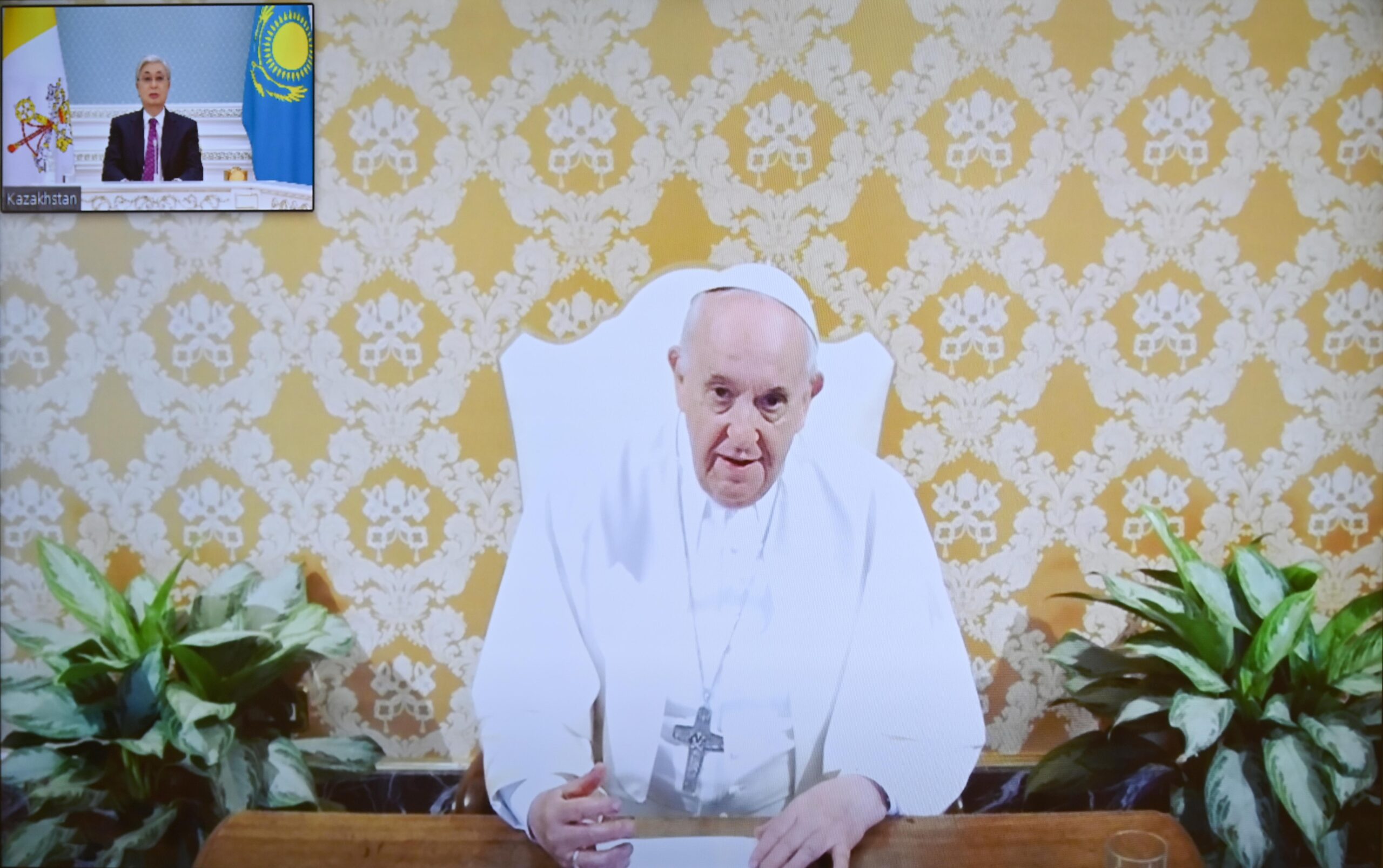 Pope Francis confirmed his official visit to Nur-Sultan and participation in the VII World Congress of Leaders of World and Traditional Religions during talks with Kazakh President Kassym-Jomart Tokayev via videoconference in April. Photo credit: Akorda Press

Anyway, both leaders of the world’s oldest and mightiest Christian churches thanked Kazakhstan for offering its capital as a venue for the long expected “spiritual summit meeting” between the world’s most important confessions.