By Saniya Bulatkulova in Society on 12 May 2022

NUR-SULTAN  – The heroic act of Sabit Shontakbayev, who saved a three-year-old child from falling from an eighth-floor window on the morning of May 11 in the Kazakh capital, went viral on social media platforms. 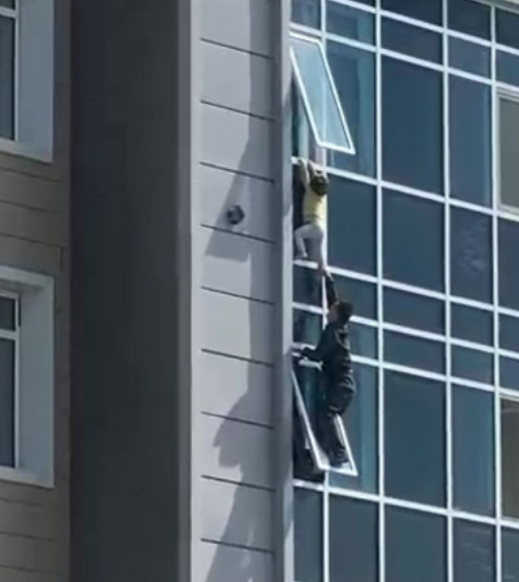 A frame from the video, where Shontakbayev saves the girl.

According to the Khabar TV channel, a little girl, who was left alone in the room, climbed out a window. Being outdoors, she grasped the eaves and called for help. Shontakbayev, 36, was on his way to work when he saw the girl and immediately rushed to rescue her.

“My friend and I knocked on the neighbors’ door living on the seventh floor. I climbed through the balcony to the girl. I did not have a safety belt, so my friend was holding my legs. At that moment I did not think about anything, I just wanted to help the child,” Shontakbayev told the Kazinform agency.

Shontakbayev, who moved to Nur-Sultan from the Kyzylorda Region to work as a construction worker two weeks ago, said he does not consider his actions to be heroic as everyone should lend a helping hand in such situation.

On the same day, Shontakbayev was awarded the Totenshe Zhagdaidagy Erligi Ushin (For Heroism in Emergencies) badge by First Vice-Minister for Emergency Situations of Kazakhstan Ibragim Kulshimbayev in the ministry’s building.

He also met with Mayor of Nur-Sultan, Altai Kulginov, who expressed his gratitude to Shontakbayev for heroism and courage.

“Taking into account the education and experience of Sabit, we have agreed with the locomotive production plant director about his future employment. Previously, Shontakbayev worked at Kazakhstan Temir Zholy (KTZ), the country’s national railroad and logistics company, so he has experience in this field,” said Kulginov.

Kulginov also promised to help bring Shontakbayev’s family – his wife and four children – to the capital, help repay the family’s debts and send his children to the Burabai resort area in the summer. Shontakbayev also received a three-bedroom apartment from the local construction company.