NUR-SULTAN – Kazatomprom national atomic company, the world’s largest uranium producer, celebrates 25 years that turned it into the world’s leader in both uranium mining and sales. To mark the date, Kazatomprom CEO Mazhit Sharipov spoke about the company’s key achievements, its efforts to establish nuclear fuel cycle production in Kazakhstan, and develop an environmentally friendly energy complex in an interview with The Astana Times. 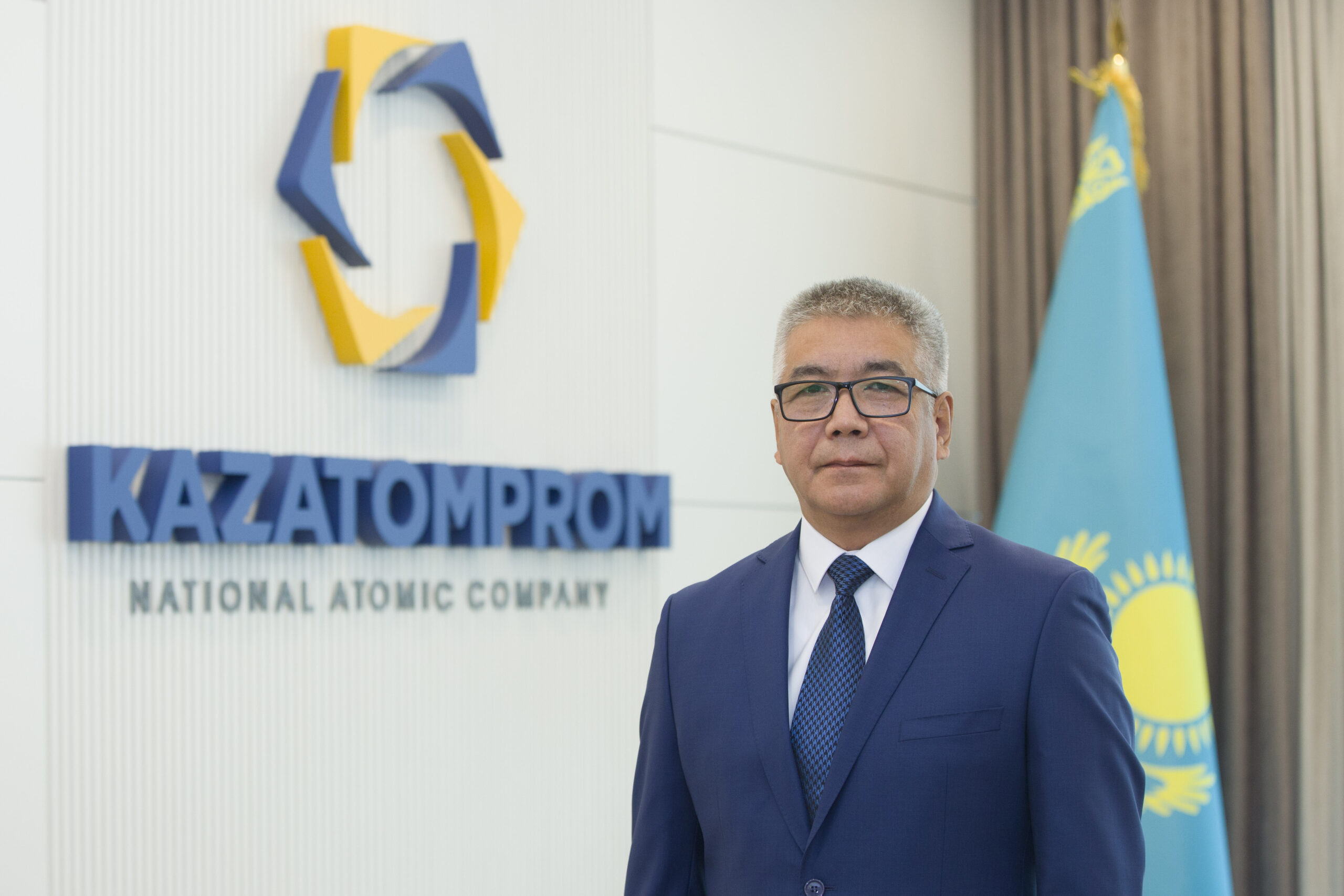 This year Kazatomprom celebrates its 25th anniversary. Tell us about the company’s achievements over this period and the strategy of Kazatomprom for the next years.

Uranium reserves are a long-term asset of the country, the management of which was entrusted to Kazatomprom. All these years, the company has not just managed this asset but has constantly introduced new technologies and implemented projects to develop its activities for the benefit of current and future generations.

While the focus of our strategy is to maintain the company’s leadership in uranium mining, we are also working to establish new nuclear fuel cycle production facilities in Kazakhstan over time, to produce more refined and more valuable uranium products. This is expected to allow the company to strengthen its position in the global nuclear market over the long term and expand its presence in the global nuclear fuel market.

We are now proud to say that Kazatomprom is the world leader in uranium mining and sales, with the lowest cost of production and about 24 percent of total primary uranium production. The company ranks second in the world in terms of explored uranium reserves and is developing 26 areas grouped into 14 uranium-mining subsidiaries. The company is constantly expanding its markets for uranium and uranium products.

It is also important to emphasize that since 2018, Kazatomprom’s shares have been traded on the Astana International Exchange (AIX) and the London Stock Exchange (LSE), meaning everything we do follows strong international governance and transparency practices. Samruk Kazyna Sovereign Wealth Fund has a majority ownership interest holding 75 percent of the company’s outstanding shares, while 25 percent is in free float and held by minority shareholders from all over the world.

Last year the company launched a Kazakh-Chinese joint plant for the production of fuel assemblies, Ulba-FA. What does this project mean for the company and for the development of the nuclear industry in Kazakhstan?

The implementation of this project is a significant historic event for the nuclear industry of Kazakhstan, which allowed Kazakhstan to enter a limited group of states producing and supplying nuclear fuel for nuclear power plants.

For Kazatomprom, this was a significant step toward the diversification of nuclear fuel cycle products available to customers of the company.

In addition, the implementation of an innovative project like Ulba-FA is an example of the company’s contribution to achieving the carbon neutrality goals of the Paris Agreement.

Since the beginning of 2022, President Kassym-Jomart Tokayev has undertaken a series of reforms, and some of them are related to national mining companies. What are some of the initiatives by President Tokayev that Kazatomprom is planning to implement?

There are several reforms that concern Kazatomprom that are implemented as part of the company’s long-term strategy.

First, in his speech at an expanded meeting of the government in February, the President stressed the importance of developing the energy complex, namely the use of nuclear power as an environmentally friendly and cost-effective source of electricity generation.

Although Kazatomprom is not directly responsible for nuclear power, as the world’s leading producer and supplier of natural uranium, it plays a significant role in the world’s energy transition efforts. Minimizing and mitigating the impacts of our activities through responsible land and water management is a central part of our business strategy.

One hundred percent of the uranium produced in Kazakhstan is mined using in-situ recovery (ISR), which unlike the underground shaft mining or open-pit mining methods, does not have a negative effect on the surface: there is no soil subsidence and disturbance, and no surface storage of low-grade ores or waste rocks.

In addition, ISR does not require liquid waste or tailings management facilities.

I would also like to emphasize that since its inception, Kazatomprom has strictly adhered to the principles of safe, reliable, and peaceful use of atomic energy, supplying mined uranium and uranium-derived products only if they are used for peaceful purposes.

At the January meeting of the Mazhilis (a lower house of Parliament), the President also spoke about the need to develop an investment policy to improve the attractiveness of the country in terms of strengthening the requirements of ESG, the global energy and technological transition.

In that regard we have increased expenditures on employee compensation, actively support the development and growth of the regions where the company operates, finance socially significant projects, and contribute to improving the welfare of local communities. We have also installed information boards for real-time radiation monitoring in nearby communities.

This year the company plans to obtain an independent ESG rating and develop medium- and long-term ESG goals with specific quantitative and qualitative targets.

All these measures are taken to improve the company’s efficiency and attract investors, who pay great attention to ESG factors when making their decisions.

In 2021, the company launched the Izbasar program, which aims to train and develop young talented leaders with the prospect of step-by-step career development at enterprises of Kazatomprom.

Four graduates of the program were employed after the first set of rotations. By the end of 2021, eight more young specialists were selected on a competitive basis and are currently undergoing a 15-month internship at Kazatomprom and its enterprises.

In total, more than 20,000 people are employed in the Kazatomprom group.

What is the company’s strategy in the context of geopolitical instability and sanctions imposed on Russia?

First of all, I would like to say that we have great compassion for all the victims of the Russian-Ukrainian conflict and we are hoping a peaceful resolution comes very soon.

As for the sanctions imposed by various countries against Russia, they have not directly affected the uranium and nuclear industry to date. That said, we are well aware that this could change at any moment, and we are diligently reviewing mitigation plans.

Kazatomprom identified a number of risks associated with geopolitical instability. There is a risk of indirect, secondary sanctions on Kazatomprom due to the operations where we have a Russian partner, risks around fluctuations in exchange rates, transportation of our products, and disruption of supply chains.

For the secondary sanction risk, we will take all actions necessary to ensure the company is not exposed to potential negative impacts on our business.

In the area of transportation, we are still shipping our products using our primary existing route, but I would like to note that in 2018, we established and have successfully utilized an alternative route that does not enter the Russian Federation. We would be ready to use it again if the situation changes and we encounter challenges.

And in addition to physical deliveries, the company has the ability to negotiate swaps with its partners and customers, where uranium that is already at or near a western delivery point is “swapped” in exchange for Kazatomprom’s uranium at another location, or for uranium to be delivered to them at a future time.

The weakening of the tenge also has no significant impact on Kazatomprom’s financial position at this time, since the company receives its profits primarily in the US dollars.

We continue to monitor the current situation and will take all necessary measures to minimize potential risks in order to prevent any potential negative impact on Company’s business and to protect the interests of all its stakeholders.