By Saniya Bulatkulova in Culture on 22 May 2022

NUR-SULTAN  –  The “Uly Dala Tany” (Dawn of the Great Steppe) historical drama directed by Akan Satayev premiered in Almaty on May 12, reported the Kazakhfilm movie studio. 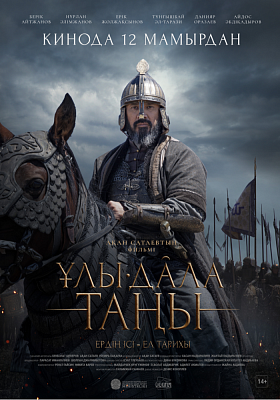 The movie tells the story of Kasym Khan, son of one of the Kazakh Khanate founders, whose reign was in the era of the state’s heyday in approximately 15-16 centuries. He is viewed as the first leader who united the Kazakh tribes.

Kasym Khan was the first Kazakh ruler, who created a set of laws named Kasym Hannyn Kaska Zholy (Bright Path of Kasym Khan), which served as a sort of Constitution for his people.

“We were making the movie for more than a year, in a very short time. We edited it directly on the set. There were a lot of people in our film crew  – 2,500 persons,” said Satayev during the movie premiere.

A fragment from the movie. Erderly people talking to children and younger generation in the steppe. Photo credit: Kazakhfilm movie studio

The historians, philosophers and ethnographers also participated and contributed to the filmmaking.

“It’s my first experience in this field, and I had no idea how to make a movie. Seeing all the difficulties of filming, I told the director: ‘Akan, after that I will be only a spectator’, and he told me that his job makes him happy. We worked closely with screenwriters on every episode, every historical event. They worked using their creativity, while we worked from a historical point of view,” said PhD in History Bereket Karibayev at the event.

The team began filming in the Panfilov district of the Almaty Region last February, then they moved to Zharkent city and Kegen village. Since mid-March the shooting of the film moved to the pavilion of the Kazakhfilm studio, where Syganak city, Buryndyk Throne Hall, and Samarkand – the guest yard where the Shaiban sets were built.

A fragment from the movie. According to some historians, there were approximately one million soldiers in Kasym Khan’s army. Photo credit: Kazakhfilm movie studio

One of the most complicated scenes – the battle in Ulytau – was filmed with the participation of the Kazakh Nomad Stunts team headed by Zhaidarbek Kunguzhinov in the summer.

In an interview with Orda.kz agency, film critic Gulazhar Mashrapova noted that “people, landscapes, scenery, animals – everything in the frame looks authentic and spectacular, they used a successful color palette. Overall, it is filmed well.”