NUR-SULTAN – Kazakh and German companies signed 11 agreements in the field of mechanical engineering, industrial automation, petrochemistry, logistics, healthcare and IT worth US$200 million at the Kazakh-German business forum on May 12 in Nur-Sultan. 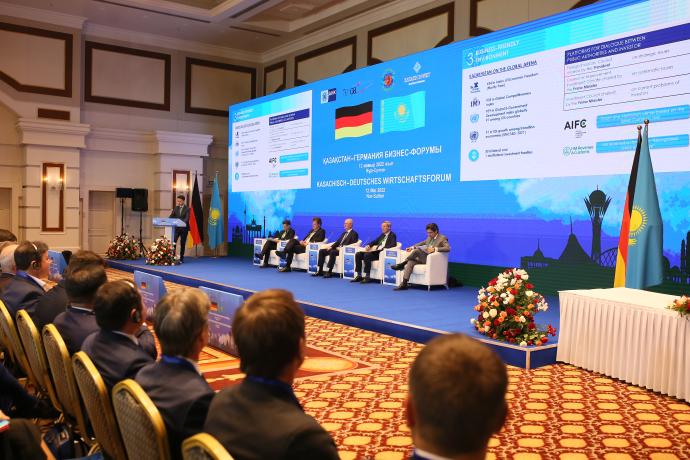 During the forum. Photo credit: invest.gov.kz

The forum gathered 250 delegates to discuss economic cooperation, high technology exchange, the green economy, and logistics, sectors that are gaining momentum given the current geopolitical changes in the region. The delegation that arrived from Germany included 65 delegates, including the top management of leading German companies.

Kazakhstan’s First Deputy Prime Minister Roman Sklyar, who chairs the governmental working group for the development of investment cooperation with Germany, spoke about his country’s political and socio-economic reforms as part of the New Kazakhstan agenda.

He also told the forum participants about the ongoing efforts to improve investment attractiveness with a focus on strengthening ESG (environmental, social, and corporate governance) requirements, global energy, and technological transitions.

Germany is one of the leading foreign investors in Kazakhstan investing around $5.3 billion in the country’s economy. The nature of German investments stands out as nearly 90 percent of the investments are in the non-resource sector which goes in line with Kazakhstan’s efforts to diversify the economy.

The trade turnover between Kazakhstan and Germany in 2021 reached US$2.2 billion, 6.4 percent higher than in 2020. More than 600 enterprises with the participation of German capital operate in Kazakhstan, including LindeAG, HeidelbergCement, BASF, Knauf, Siemens, Wilo, Metro Cash and Carry, and CLAAS.

“Kazakhstan is, of course, Germany’s most important trading partner in Central Asia. Thanks to their technological solutions and expertise, German companies increase productivity in all sectors of the economy. Together we can and will achieve much more. For us, Kazakhstan is much more than a supplier of raw materials. We are convinced that Kazakhstan can derive the greatest sustainable benefit from diversified development,” said Manfred Grundke, member of the board of the Eastern Committee of the German Economy.

The key takeaway from the forum was that current geopolitical developments create not only challenges, but opportunities and Kazakhstan should be ready to use them.

Michael Harms, managing director of the Eastern Committee of the German Economy, said that many German companies now seek to relocate their offices from Russia to Kazakhstan, or those, who had partners in Russia, now plan to build partnerships with Kazakh companies. He emphasized that these companies want to “come here for a long time with real industrial investments.”

As these companies plan to enter the Kazakh market, the Kazakh-German investment portfolio has so far been impressive. The two countries have 46 projects worth more than $28.4 billion and to date, 28 projects have been implemented worth $1.1 billion.

Earlier in the day, the capital hosted the 34th Berlin Eurasian Club meeting with German counterparts that focused on the New Kazakhstan agenda, bilateral cooperation in the development of a green economy, logistics and transport, and investments. The panel session discussed high-tech spheres of economy, exchange of experience, technology transfer, and training.

The German delegates noted the positive dynamics in the development of Kazakh-German cooperation, including the green economy, and partnerships in agriculture, logistics and transport.

The Berlin Eurasian Club was founded in 2012 at the initiative of Kazakhstan’s First President Nursultan Nazarbayev and former Vice-Chancellor and Minister of Foreign Affairs of Germany Hans-Dietrich Genscher. It is designed to serve as an informal dialogue platform open to the participation of representatives of government officials, businesses, experts, and specialists from Germany and other European countries to discuss acute issues in various economic spheres.