By Assem Assaniyaz in International on 4 May 2022 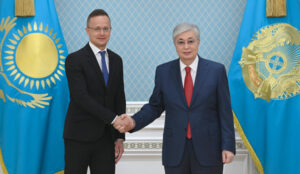 Szijjarto and Tokayev during their meeting in Akorda. Photo credit: Akorda

During the meeting, Tokayev conveyed greetings to newly elected Hungarian President Katalin Novak and congratulated the Fidesz party led by Hungarian Prime Minister Viktor Orban on the recent win in the parliamentary election. He emphasized significant economic opportunities for Kazakhstan and Hungary.

He also told Szijjarto about large-scale political and economic reforms and preparations for the constitutional referendum, all in an effort to implement the New Kazakhstan agenda. Tokayev said he is ready to pay a return visit to Budapest at the invitation of the Hungarian Prime Minister.

As part of his visit to Kazakhstan, Szijjarto discussed trade and economic cooperation with Deputy Prime Minister and Minister of Foreign Affairs Mukhtar Tileuberdi. They commended the dynamic development of trade, economic and investment cooperation.

Szijjarto said that the opening of representative offices of Hungarian companies at the AIFC (Astana International Financial Center) will contribute to the expansion of their presence in the Central Asian market.

The two countries also cooperate in education with nearly 1,000 Kazakh students studying in Hungary. There is an intergovernmental scholarship program that allows students from Kazakhstan to receive a higher education in Hungary. Every year, Kazakhstan allocates 250 grants for that purpose.