By Staff Report in Astana, Conference on Interaction and Confidence Building Measures in Asia on 3 May 2022

NUR-SULTAN – Some 30 sakura (cherry blossom) seedlings have been planted to mark the 30th anniversary of the Secretariat of the Conference on Interaction and Confidence Building Measures in Asia (CICA) in the Presidential Park in Nur-Sultan on April 30, reported the organization’s press service. 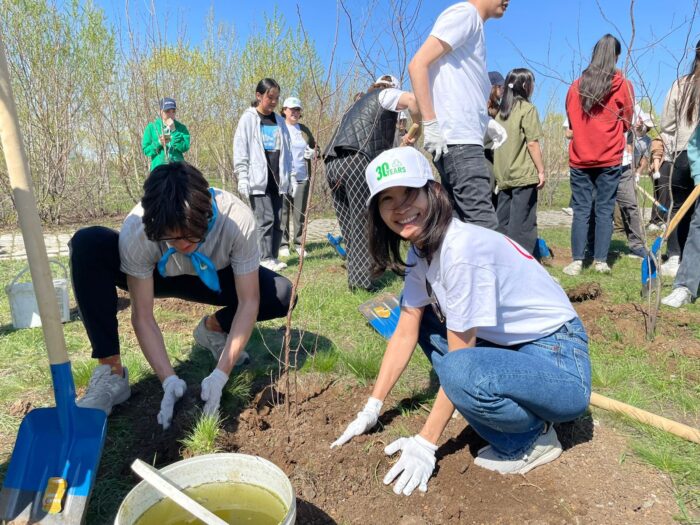 During the ceremony, Vice Minister of Ecology, Geology and Natural Resources Aliya Shalabekova said that Kazakhstan launched a nationwide campaign to plant trees in 2021. The campaign follows the instructions of Kazakh President Kassym-Jomart Tokayev to plant 2 billion trees in forests and 15 million trees in cities.

CICA Executive Director Ambassador Kairat Sarybay said that the event is aimed to raise awareness of trees and plants in our ecosystem. “CICA applies a comprehensive approach to security issues, based on the strong connection between economic and social well-being and environmental aspects. And this event corresponds to the main objectives of CICA under the environmental dimension and contributes to efforts to achieve sustainable development goals,” he said.

The CICA Alley was opened at the park in 2021. The CICA Member and Observer States planted 30 seedlings of the Red Rowan as a symbol of peace, prosperous life, and well-being.

“I hope that as we mark the 30th anniversary of CICA – an important milestone – we will again recommit ourselves to cooperation and working together to achieve our common goal to promote peace and cooperation in Asia and leave a more sustainable and greener planet for the next generations,” Sarybay said.

This year, the sixth CICA Summit will be held on Oct. 12-13 in the Kazakh capital.

CICA’s establishment was proposed by Kazakhstan’s First President Nursultan Nazarbayev during a statement at the 47th session of the UN General Assembly on Oct. 5, 1992.