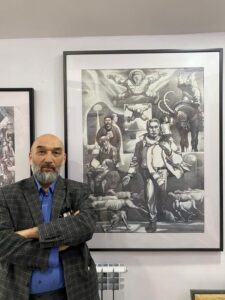 Born in 1959 in the Jambyl Region, Amanat Nazarkul is a graduate of the monumental and easel painting department at the Moscow Surikov Institute of Fine Arts, a member of Kazakhstan’s Union of Artists, and a member of the Academy of Arts.

The artist worked in three mediums – painting, sculpture and graphics.  The distinctive feature of all his works was the theme of the ancient Turks and the Turkic peoples. Nazarkul says that society in our time has unfortunately lost interest in history. The artist himself reads a lot of archaeological and historical literature.

According to him, there are many unrevealed moments in Turkic history that are yet to be discovered.

“The historical and national theme in painting is conveyed through symbolism, thus a picture without symbolism, which does not reflect the philosophy of the artist – is not a real painting. The artist must be a thinker and a philosopher as well,” he said.

The Turkic theme, however, is not the only plot for his creations, Nazarkul also likes to depict pressing issues of the modern world. He recently painted a picture named Salvation Island, which depicts a mother and her children trying to escape from a flood taking over their city. The painting was inspired by the dreadful floods taking place all over the world last year. 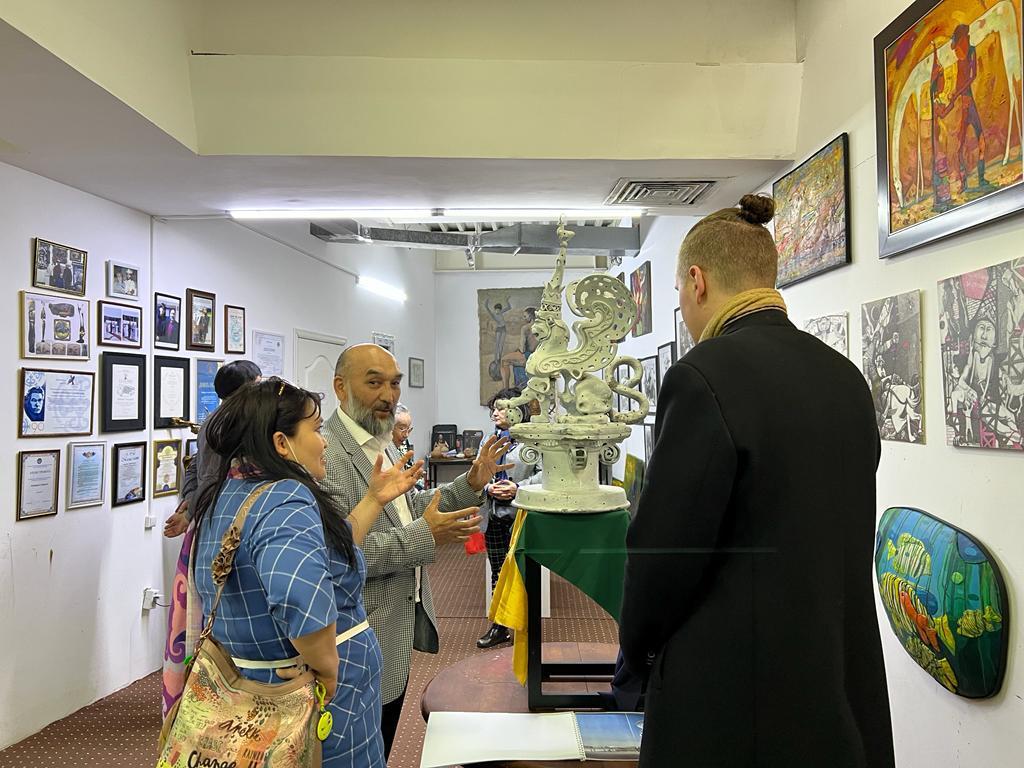 The artist Nazarkul presenting the exhibition to the visitors.

“When a painting starts, you don’t know how it will end,” he said.

Nazarkul is in a constant state of drawing. In his studio he paints, at home, he thinks and even in his sleep he sees images of future paintings. He says he is inspired by the idea that artists have very little time to create something truly worthwhile that will outlive the artist himself.

For his works, the artist draws inspiration from Mexican masterminds such as Diego Rivera, Jose Clemente Orozco and David Siqueiros. “Three geniuses who lived in the same country and time. What sets them apart from other artists is the monumentality and scale of thought,” he said.

And of the world-renowned Soviet classics, he is inspired by Chingiz Aitmatov, to whom he dedicated a series of works.

Speaking about his future artistic endeavors, Nazarkul said he will continue to create in three mediums – sculpture, painting, and graphics, prioritizing monumentalism in his works. He also plans to exhibit his works in Germany and dedicate them to the diplomatic friendship between Germany and Kazakhstan.

The opening of the latest exhibition took place at the beginning of May and was attended by the representatives of the German Embassy and representatives from the Ministry of Foreign Affairs.