By Saniya Bulatkulova in Society on 25 April 2022

NUR-SULTAN  – Approximately 123,000 people participated in the city-wide cleanup on a total area of 5.4 million square meters on April 16 and 23 in Nur-Sultan as a part of the Birge – Taza Qazaqstan (Together – Clean Kazakhstan) national environmental campaign. The city’s akim (mayor) Altai Kulginov announced this on his Instagram. 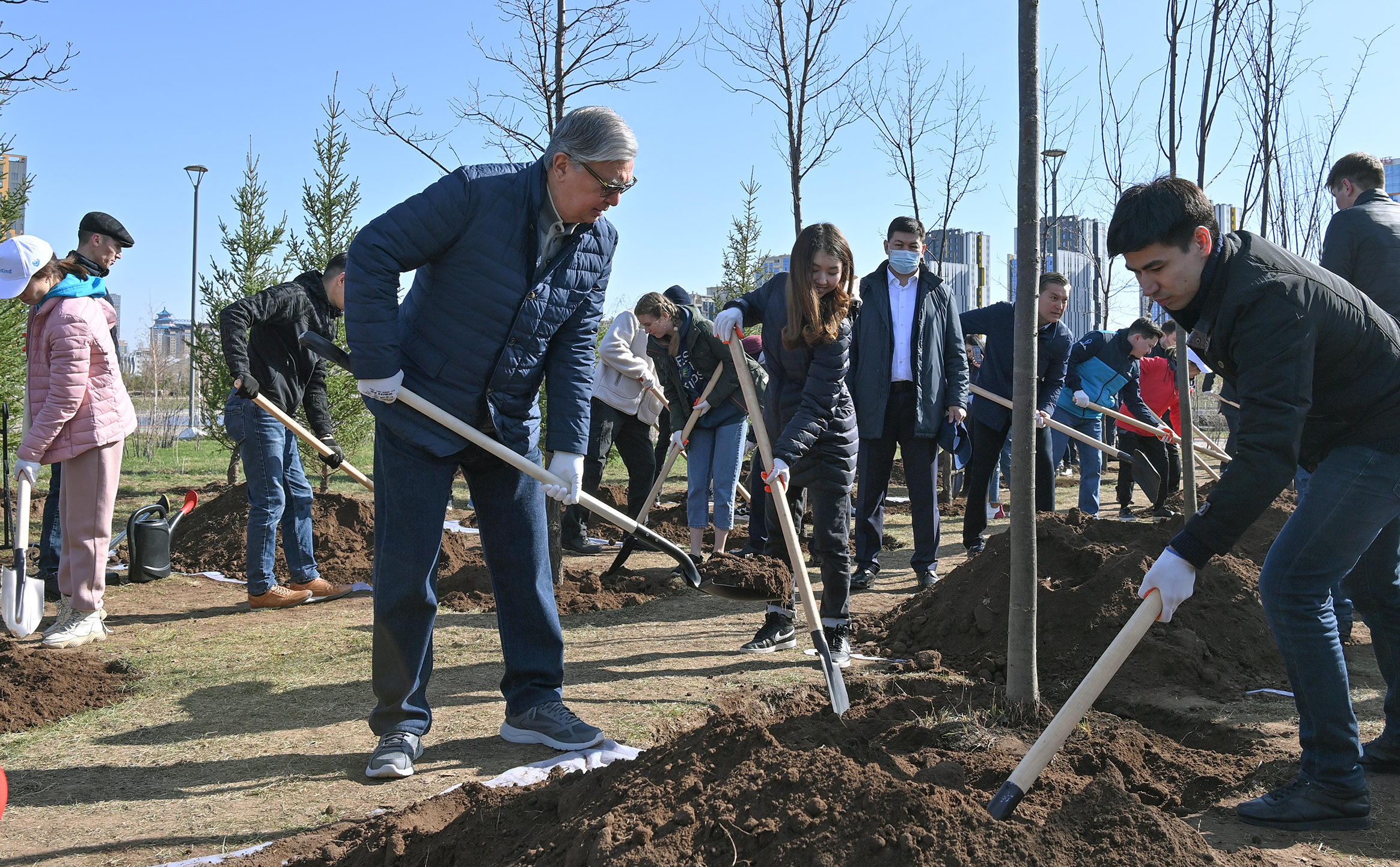 The city residents planted more than 4,000 seedlings of pine, birch, oak, linden and maple among other trees as well as collected more than 1,860 tons of garbage and transported it to the landfill.

Eco-volunteers and Presidential Youth Personnel Reserve members worked together and Kazakh President Kassym-Jomart Tokayev planted a tree in the capital’s Botanical Garden during the cleanup on April 23. 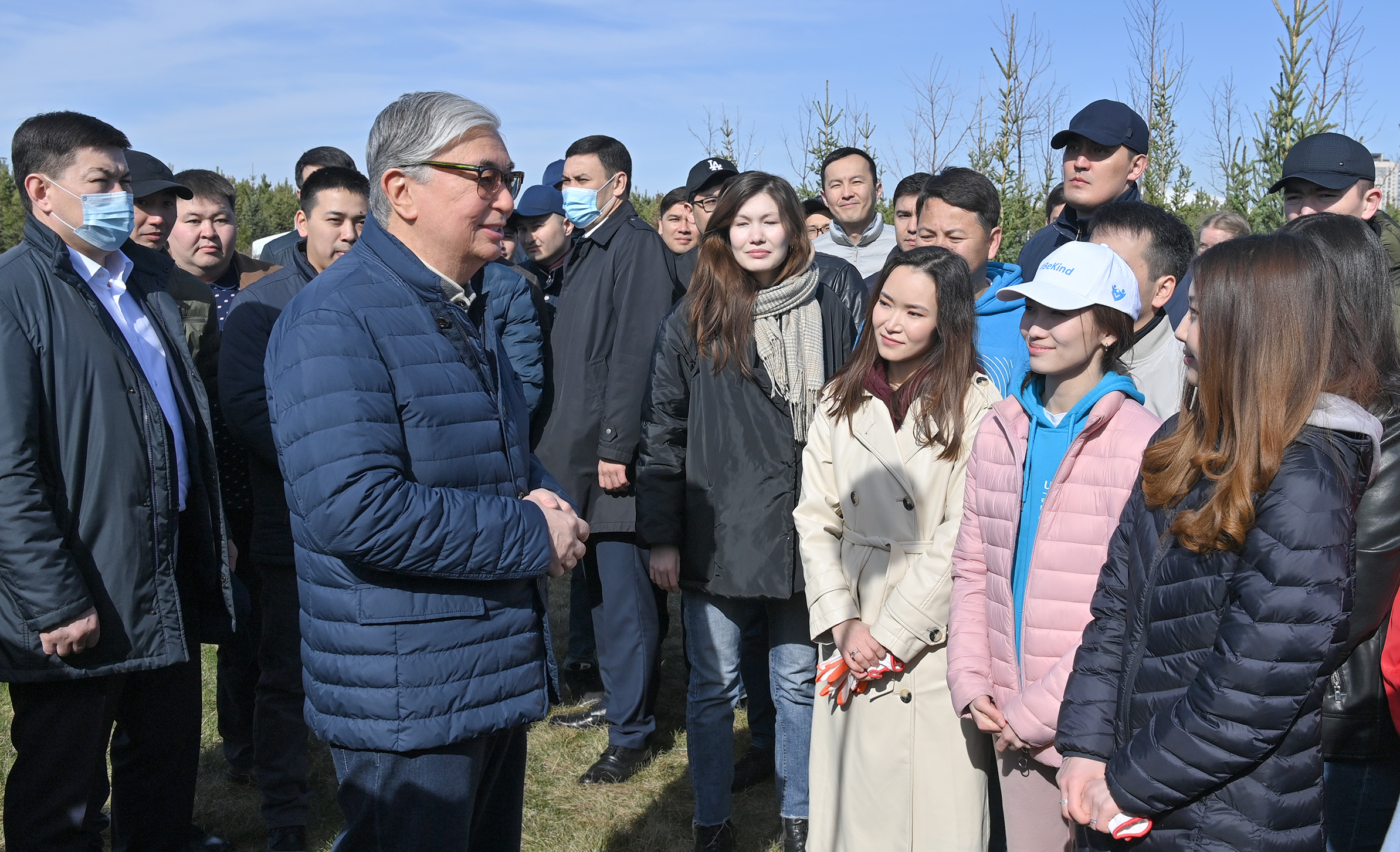 Сonversing with the younger generation, Tokayev noted the importance of respect for nature and said that Kazakhstan should become a green state in the years ahead.

On the same day, more than 40 envoys of the Commonwealth of Independent States (CIS), Europe and Middle East planted 50 seedlings in the Botanical Garden, together with the Kazakh Foreign Ministry.

More than 40 envoys of the Commonwealth of Independent States (CIS), Europe and Middle East participated in the city-wide cleanup on April 23. Photo credit: Kazakh Ministry of Foreign Affairs

“President Kassym-Zhomart Tokayev committed to help plant two billion trees in five years as part of Kazakhstan’s green transformation. My fellow ambassadors and I were pleased to contribute to this goal by planting trees in the Botanical Garden of Nur-Sultan on Saturday as well as supporting Earth Day on April 22. We really liked the atmosphere, tea and delicious plov,” said British Ambassador to Kazakhstan Kathy Leach.

Ambassador Kestutis Jankauskas, who serves as Head of the EU Delegation to Kazakhstan, agreed with Leach, noting that “it is a small, but important contribution to the greening of the Great Steppe and the fight against climate change.”

In his turn, Ambassador of the Netherlands to Kazakhstan André Carstens said that spring is in the air not only in terms of season, but also in terms of reforms. “This will improve the daily lives of Kazakh people, strengthen human rights and attract more investment to diversify the economy in a more sustainable manner. So I view these trees as living symbols of growth, health and hope!” Carstens added.

In addition, more than 160 officials of the Ministry of Foreign Affairs cleaned up waste and planted 30 seedlings around the building of the ministry and in the Linear Park.

This unique event was largely made possible by Nur-Sultan’s akimat active support and involvement.

This year, the annual action, which aims to raise public awareness regarding environmental pollution, started on April 16 and will last through May 16 in Nur-Sultan.