NUR-SULTAN – On early Sunday morning, part of the Holy Fire from Jerusalem’s Church of the Holy Sepulchre was brought to the airport in Almaty, as Orthodox Christians in Kazakhstan celebrated Easter. The delegation that delivered the flame was greeted by the airport officials and priests of the southern regions. 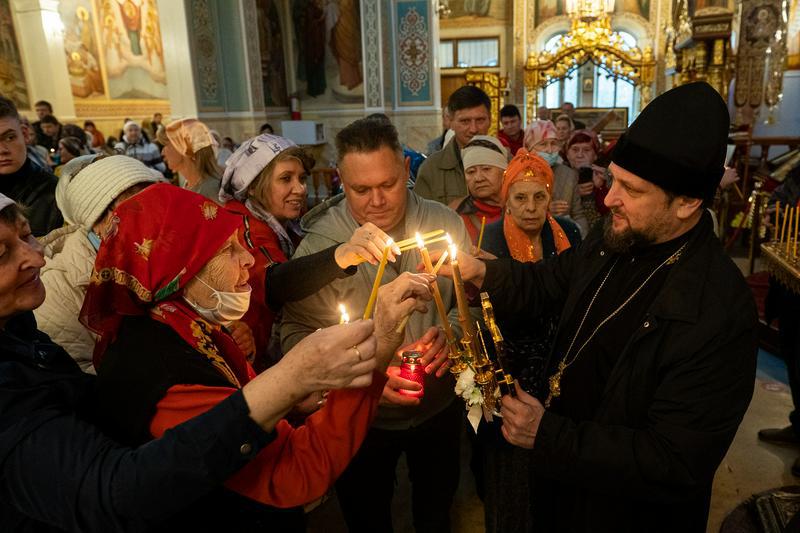 The procession of the Holy Fire that lighted up in Jerusalem’s Church of the Holy Sepulchre, where Jesus’s crucifixion, burial, and resurrection took place, began at midnight in Aktau before the jet carried it to Nur-Sultan, where part of the light was received by the clergy of the capital city and the northern regions of Kazakhstan.

“Our delegation got a seat on the upper tier of the temple. And for the first time, I could watch from a different angle how the procession goes around the Tabernacle – a small temple built over the deathbed, how fire suddenly appears from this temple, how it fills and illuminates the entire temple, and how those gathered rejoice and congratulate each other,” said Archpriest Igor Svetlichny, a clergyman of St. Nicholas Cathedral in Almaty.

Easter is one of the most festive events among Christians worldwide and it marks Jesus Christ’s resurrection and triumph over death. Congratulating the citizens, President Kassym-Jomart Tokayev said Easter is a “joyful day, filled with hope and faith.”

“It inspires creation, caring for one’s neighbor, and helping those in need. Harmoniously woven into our culture, Easter traditions bring people of all ethnicities and faiths together. They help strengthen family values, mutual understanding and harmony in society,” said Tokayev referring to Kazakhstan’s tradition of multi-ethnic and multireligious accord.

These values are becoming increasingly important as Kazakhstan steps into a new stage of its development, according to Speaker of the Senate Maulen Ashimbayev.

“The good traditions of this holiday inspire people to good deeds and aspirations, serve to instill such values and moral guidelines as care for others, mercy, and compassion,” he said. “‘At the new stage of our country’s development, mutual respect for each other among representatives of different ethnic groups and confessions is becoming increasingly important”.