Muslims in Kazakhstan Prepare for the Holy Month of Ramadan

By Assem Assaniyaz in Society on 2 April 2022

NUR-SULTAN – This year, the Holy Month of Ramadan will begin on April 2 and last through May 1, said the Spiritual Administration of Muslims of Kazakhstan (SAMK). 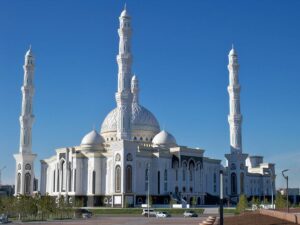 Ramadan is a holy month of fasting. For Muslims, it is a period of spiritual renewal and purification. People strive to help those in need, make donations and do good.

Oraza Ait (Eid al-Fitr in Kazakh) starts on May 2. Oraza Ait calls for mutual respect and mercy, forgiveness and kindness. This year, the Night of Power, or Laylat al-Qadr, falls on April 27.

The date was agreed on with the Spiritual Administration of Muslims of Uzbekistan and Kyrgyzstan. Previously, the countries of Central Asia had differences in their celebration of religious holidays for theological reasons.

“Today, a special council of Central Asian countries has been established in the field of Sharia and religious agreements fatwa (legal opinion given by a mufti), where we will coordinate and resolve common issues,” the SAMK Chair and Supreme Mufti Nauryzbai Kazhy Taganuly said at a Central Communications Service (CCS) press briefing.

The Supreme Mufti called on Muslims to charity and the country’s entrepreneurs to reduce the prices of socially important goods and food by up to 10 percent in honor of the holy month.

He also spoke about the organization of large-scale national charity events as part of the Zakat and Charity Foundation under the SAMK.

This year, the pitir sadaqa (charity donation) amount is 500 tenge (US$1.08). The amount for the donation of pitir-sadaqa was taken from the calculation of the cost of two kilograms of flour in the country.