There is something mystically dramatic in every turn of the fate of Mukhtar Auezov, the most famous Kazakh writer of the twentieth century who was born on Sept. 28, 1897, 125 years ago. There is a tragic story with a happy ending even behind another seemingly benign anniversary which we celebrate this year – seventy years ago, in 1952, Mukhtar Auezov’s main prose work, “The Way of Abai,” was finally published in full. Even though the novel was a passionate tribute to a genius of indisputable reputation – Kazakhstan’s greatest son, the famous poet Abai Kunanbayev, the Soviet authorities found some “faults” with Auezov’s work. Joseph Stalin was still alive, even though he had only a few more months to live, and this meant that “the faults” could cost Auezov his life. 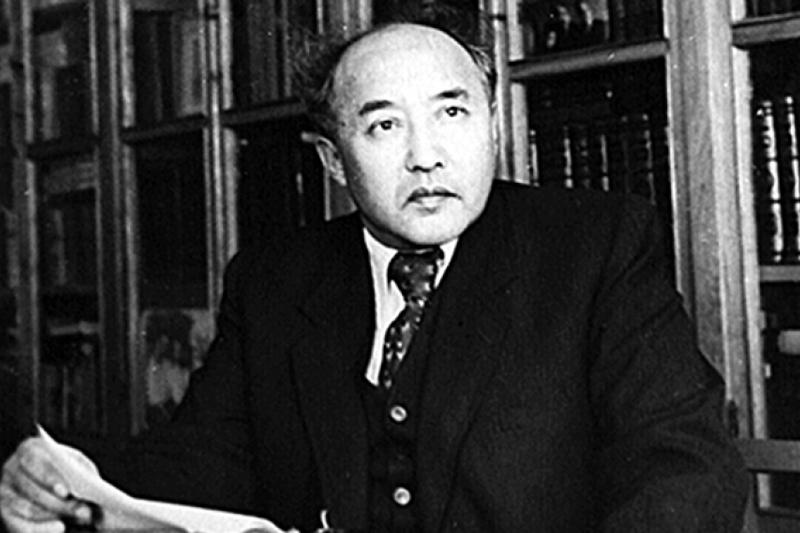 So, when in January 1953 the Soviet Union’s main newspaper Pravda accused Auezov of “lack of civic vigilance,” this was an extremely bad omen. Few days later he was chased out of Kazakhstan’s main university on accusations of “bourgeois nationalism”. Auezov knew: if he wanted to survive, he had to flee, for the umpteenth time in his life. He was already 56 years old and one of the most famous people in Soviet Kazakhstan, but that did not help. “Everyone is equal in front of a despot,” Marx wrote in his young years. Stalin too vividly proved this fresh thought of the young shrewd Marx almost 70 years after its formulation.

It was frightening what was happening to middle aged Auezov in 1952-1953, precisely 70 years ago. In 1947, Auezov was awarded an order and later the Stalin prize for the first volume of his novel on Abai. For heaven’s sake, in his young years, Auezov had been married to Abai’s granddaughter, which in Kazakhstan was something like being a son-in-law of Shakespeare in England! 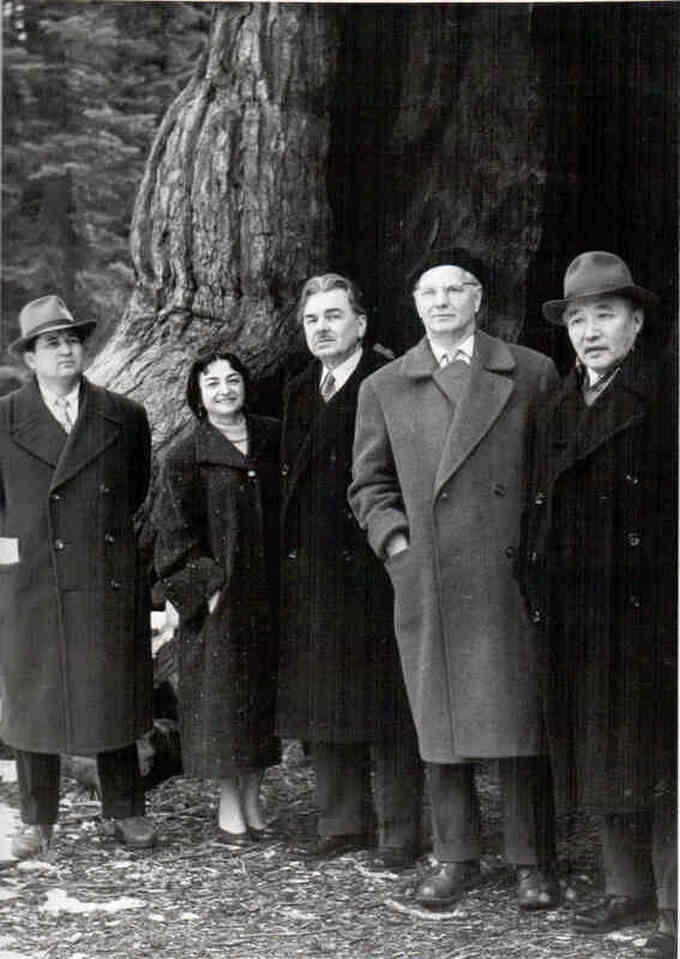 In 1960, a group of Soviet writers with a female translator including (from left to right) Oles Gonchar, Sofia Krugerskaya, Leonid Leonov, Stepan Shchipachov and Mukhtar Auezov had a one-month tour across United States. Photo credit: 365info.kz

It was the very end of 1952, so Stalin was still alive, which meant that everything (and, in most of the cases, something really bad) was possible. So, in 1953 Mukhtar Auezov secretly left Almaty and rushed to Moscow, where he read lectures on Kazakh literature in the Soviet Union’s most prestigious Moscow State university (MSU)  for two years. Auezov was a man of many cultures, arts and languages – just like Abai Kunanbayev, his relative, moral model and main literary character. The MSU’s knowledgeable professors knew they would  find no one better than Auezov to tell the students about the most famous epic poem of the Kyrghyz people – the closest relatives and neighbors of Kazakhs: the priceless “Manas”. Why was Auezov the best lecturer on the subject? Because Auezov (with a few comrades-in-arms, most of whom perished in this struggle) saved Manas from oblivion and possible prohibition just a few years earlier! 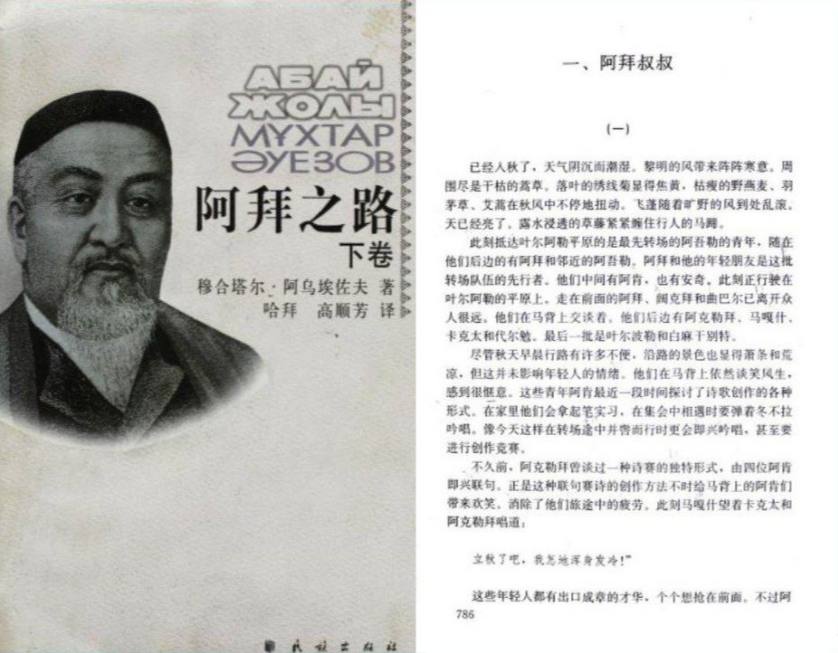 “The Way of Abai” translated to Chinese. Photo credit: pushkinlibrary.kz

It might be hard to perceive it now, but in the late forties the main character of this epic, the legendary pre-historic prince Manas, was close to being declared a “persona-non-grata” in Soviet literary studies simply because he was… a prince! The diehard Marxists viewed this high position of (semi-mythical) Manas at the very top of the medieval social pyramid as a mortal sin before communist religion. And Auezov had to withstand a tough rhetorical fight, defending this medieval character and the folklore about him. (Imagine how England would treat someone who saved King Arthur from bureaucratic “cancellation”!) This was Auezov’s destiny: he saved Manas and Kunanbayev, the dearly loved heroes of the Central Asian peoples, from these very peoples’ seemingly most passionate  communist lovers. And it should be noted: this rhetorical fight of Auezov was not about scientific degrees or honorariums, it was about life and death. Torekul Aitmatov, the father of Kyrgyzstan’s world famous writer Chingiz Aitmatov (his works were translated into 50 languages), fell victim to Stalin’s repressions precisely because of his defense of Manas.

The turbulent life of Mukhtar Auezov continued for 64 years and it included the sportive fame of Kazakhstan’s best soccer player in the 1920s, membership in the (yet truly revolutionary) early Bolshevik party, protests against the mistreatment of Kazakhs which ended in the famines of 1920 and the early 1930s, two years in Stalin’s jail (for that conspicuous “bourgeois nationalism,” which cracked up to be defense of folk heritage even in the 1960s). Children from several marriages, whom Auezov cherished and saved. One of his children later became the director of his museum in Kazakhstan. Also, trips, voyages or, rather, expeditions into the depths of his native Kazakhstan – talks to people, records of ancient memories, and, of course, the unending search for the traces of his immortal, unachievable ideal – the great Abai Kunanbayev. 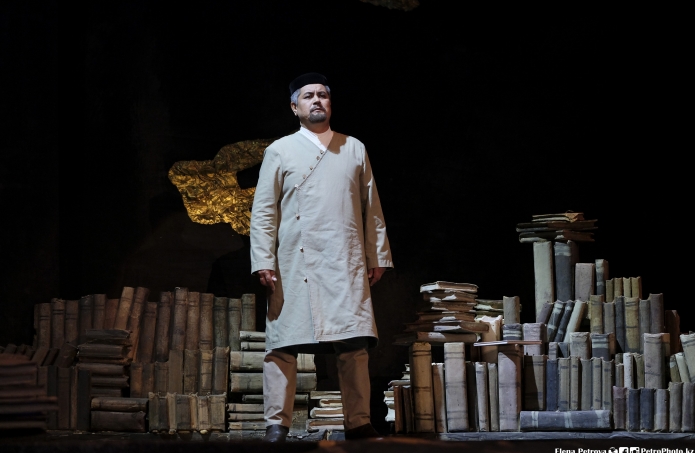 Amazingly, the troubles and tribulations of Auezov’s life had a happy ending. If Abai only saw several of his poems published, Аuezov became a doctor of science (philology) and the author of the world-known novel “The Way of Abai,” which had been translated into 100 languages. Auezov knew what he deserved, he fought for his discoveries  – and his achievement was universally confirmed. But still: what a life! And I would add: what a noble fight and what a lesson to posterity.