By Assem Assaniyaz in Business on 1 April 2022

NUR-SULTAN – Kazakhstan’s trade turnover with China reached $1.4 billion as of Jan., which is 53.4 percent more than a year earlier, reported on April 1 Finprom.kz . 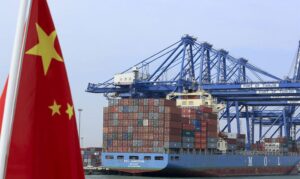 China’s share is 16.1 percent of the country’s foreign trade turnover, according to the Bureau of National Statistics of the Agency for Strategic Planning and Reforms.

Exports to China exceeded imports in the first month of this year. Exports increased by 77.9 percent over the year, and reached $771.7 million. China’s share of total exports from Kazakhstan amounted to 12.7 percent.

Imports increased by 31.8 percent and stood at $648.5 million, accounting for 23.8 percent of China’s share in the total volume of imports to Kazakhstan.

According to the National Bank’s statistics, the obligations of Kazakh residents to Chinese investors as of Oct. 1, 2021 amounted to $13.5 billion, which is 0.4 percent more than a year earlier. The indicator rose slightly after a two-year decline.

Investors from China allocated the majority of finance to the manufacturing industry in Kazakhstan ($2.8 billion) by October 2021. Investments were also made in the sphere of transport and warehousing ($2.6 billion), trade and car repair ($2.1 billion).

As of March 1, 1,500 companies with Chinese capital operate in the country. This figure increased 17.4 percent more than a year earlier.

Most of these companies are engaged in the wholesale and retail trade as well as in the car repair, construction and mining industries.