By Assem Assaniyaz in International on 26 April 2022

NUR-SULTAN – The conference on constitutional and international aspects of the upholding the rule of law took place in Almaty on April 22 to mark the 10th anniversary of Kazakhstan’s accession to the Venice Commission of the Council of Europe and the 30th anniversary of the country’s membership in the United Nations. 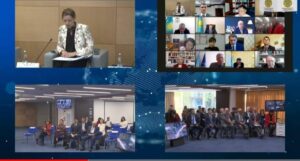 Conference on constitutional and international aspects of the upholding of the rule of law. Photo credit: ortcom.kz.

The heads of state bodies, representatives of international organizations, as well as prominent legal scholars outlined the results of Kazakhstan’s cooperation with the Venice Commission and the UN on the promotion of the rule of law and discussed further partnership, particularly outreach activities and public engagement.

In his welcoming speech, the Chairman of the Commission on Human Rights, member of the Venice Commission of the Council of Europe from Kazakhstan Igor Rogov recalled the 30th anniversary of the country’s independence, which was celebrated last year.

“The final point in the legitimization of sovereign Kazakhstan was its admission to membership in the United Nations on March 2, 1992. Kazakhstan, 20 years later, has received confirmation that the commitment to build a democratic and rule-of-law state, proclaimed in its founding documents, is recognized and supported by the broad international legal community. On March 13, 2012, our country became a full member of the Venice Commission of the Council of Europe,” Rogov said.

For 10 years, the European Commission for Democracy through Law facilitated the development of constitutionalism in Kazakhstan by offering counsel and recommendations when approached for advice. It has provided expertise in reforming legal institutions in Kazakhstan on multiple occasions, including the legal framework of the Constitutional Council and the reform of the Supreme Judicial Council.

Chairman of the Constitutional Council Kairat Mami stated that Kazakhstan has repeatedly appealed to the Commission as an independent advisory body to obtain opinions on constitutional reforms.

“A key task in the framework of our cooperation with the Council of Europe is Kazakhstan’s accession to a number of European conventions, including conventions in the field of criminal justice,” said First Deputy Minister of Foreign Affairs of Kazakhstan Akan Rakhmetullin.

Speaking about the public administration, Kazakh Minister of Justice Kanat Mussin noted that “in March this year, the Head of State presented in his Address a historic package of political reforms, which will establish a fundamentally new constitutional balance between the institutions of power.”

David Chikvaidze, the Chef de Cabinet to the Director-General of the United Nations Office at Geneva (UNOG) said that “Kazakhstan, as a loyal ally and partner in initiatives at the international, regional and national levels aimed at promoting good governance, transparency and accountability of state institutions, sets an example in solving problems related to the rule of law.”

The international event was held in a hybrid format and was organized by the Kazakh Constitutional Council, the Presidential Human Rights Commission, the Kazakh Ministry of Foreign Affairs, the Sorbonne Institute-Kazakhstan, the UN Office in Kazakhstan and the Venice Commission.