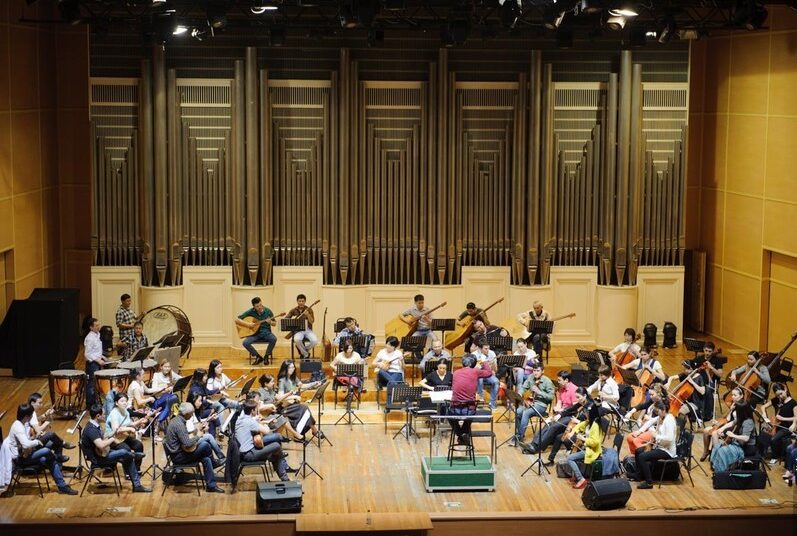 Tlendiyeva, daughter of prominent Kazakh composer and conductor Nurgisa Tlendiyev, was the first woman in Kazakhstan and in the Commonwealth of Independent States to hold the position of artistic director and chief conductor of the orchestra at the age of 24 back in 2009. 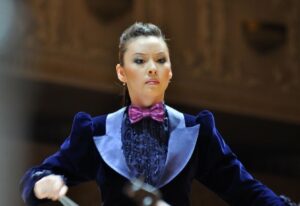 Since her appointment as a chief conductor, in an effort to continue the legacy of her father, who was the founder of Otyrar Sazy orchestra, the repertoire has been expanded and the orchestra started playing modern tunes and old compositions in a modern arrangement. Those changes attracted larger audiences, especially the younger generation who now regularly come to the concerts.

Over the years, the orchestra developed an impressive repertoire and has gathered full halls and standing ovations during their tours in France, Italy, Germany, Spain, Turkey, Saudi Arabia, Jordan, Iraq, Morocco, and Vietnam. With such a vast range of sounds available, the orchestra displays rich, more ornate, national-flavored original compositions of Kazakh folklore.

Much of this success belongs to Tlendiyev, who rewrote traditional Kazakh music and classical works to the sound of the new orchestra, writing separate parts for each individual revived folk instrument.

He was a conductor, composer and masterful dombra player, renowned as one of the most versatile musicians and improvisers of his generation.

On the pages of the Kazakhstanskaya Pravda newspaper in 2015, the year of Tlendiyev’s 90th anniversary, music critic Yuri Aravin wrote his memories of the composer’s unique conducting style. 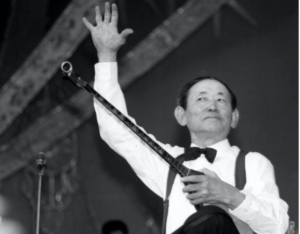 Tlendiyev was a masterful dombra player and was known for his immense talent for improvisation.

“His trademark technique was to turn his back to the orchestra in the middle of the composition as if giving the musicians complete freedom of performance, and to create a wonderful effect of co-thinking, complicity, co-creation for everyone on stage and in the audience,” wrote Aravin.

Tlendiyev also had an immense talent for improvisation.

“And when he played the solo on the dombra, he could pump up such a tension of expectation that the introduction of the orchestra by a vigorous sweep of his hand would produce an explosion of emotions, a burst of joy and inspiration, and a storm of applause from the audience,” he added.

As a composer, his works were impressive because of their wide range. He wrote more than 500 musical pieces, produced many kuis (traditional musical compositions) that were widely acclaimed by the audience among which are “Alqissa,” “Father’s Reflections,” “Mahambet,” and “Music of Farabi,” and composed music for many films that became classics of Kazakh cinema, such as “My Name is Kozha,” “Alpamys Goes to School,” and “The Steppe Chase.”

For the “Akku” kui, which was played in the well-known “Kyz Zhibek” film, the composer received acknowledgement from the director of the film, who said that Tlendiyev’s music “made the film a people’s film.”

Kazakhstan will celebrate Tlendiiyev’s 100th anniversary in 2025 and President Tokayev noted the importance of the nationwide celebration of this important event to acknowledge Tlendiyev’s invaluable contribution to Kazakh music.