WASHINGTON, D.C. – A top level Kazakh delegation visited the United States last week to discuss the strategic partnership between Kazakhstan and the U.S. and the sanctions policy. 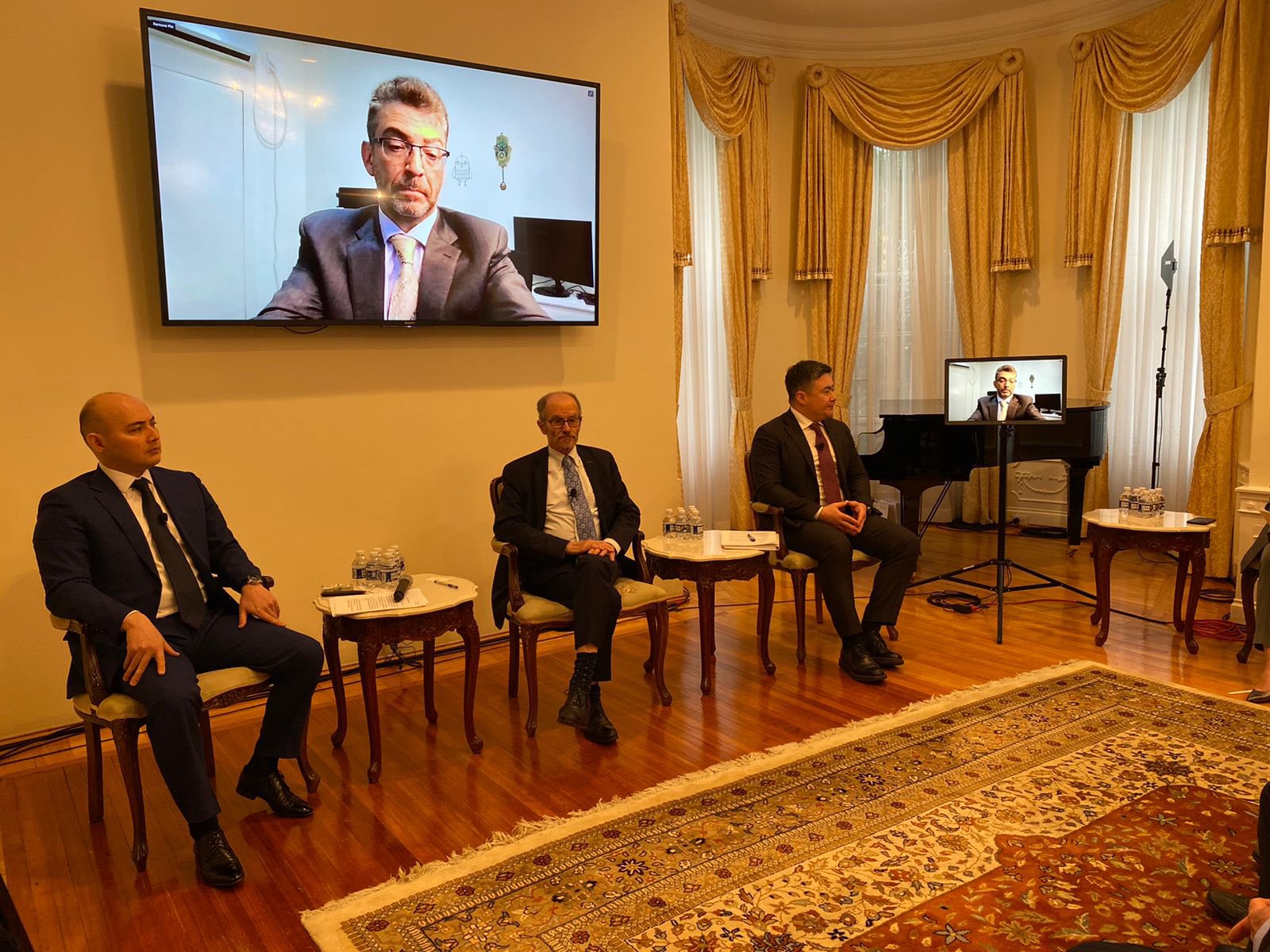 As part of the visit, the delegation, led by First Deputy Chief of the Presidential Staff Timur Suleimenov, spoke about Kazakhstan’s economic outlook against the bacckdrop of Western sanctions against Russia at a panel discussion in Washington, D.C.

Kazakhstan’s economic ties with Russia are strong enough that Western sanctions against Russia have the potential to seriously affect investment and economic growth in the Central Asian country, Suleimenov told the event organized by the NewLines Institute. As the government of Kazakhstan is trying to mitigate what he described as collateral damage from the sanctions, opportunities for Central Asia’s biggest economy are also emerging.

The delegation mentioned they were visiting the U.S. with two goals in mind – to reinvigorate the bilateral ties with the U.S., both with the government and think tanks, and meet in person with the International Monetary Fund and World Bank officials – something that has long been impossible because of the COVID-19 pandemic.

“Kazakhstan is changing internally because of many events that we saw, especially the tragic January events, the ensuing changes in the government, in the power structure in Kazakhstan. It is changing politically and constitutionally. Our President Tokayev in his extraordinary address to the nation announced very ambitious reforms,” said Suleimenov.

The state-of-the-nation address delivered by Tokayev on March 16, six months ahead of schedule, vowed sweeping political and economic reforms under the New Kazakhstan agenda – all aimed at transforming the nation and seeking to address the long-standing problems that inhibited the country’s political and ecnomic progress.

The reforms are intended to make it easier for parties to register and have a voice in politics, limit presidential powers and give more powers to the Parliament, among other key goals.

The government’s efforts to increase political competition will be coupled with the efforts to boost fair economic competition. To do that, Kazakhstan will continue capitalizing on its investment attractiveness.

“We probably have one of the best investment climates in the region. We are introducing all the best practices around the world, but still, we felt the results of those efforts were limited to a very small group of oligarchs, politically connected and, therefore, economic benefits and national wealth was not translated to the people,” said Suleimenov.

In Kazakhstan, only 162 families own half of the country’s wealth, according to the 2019 KPMG report, while half of the population has a monthly income per capita of no more than 50,000 tenge (US$110). “A special working group was created to demonopolize the economy and it is working quite efficiently,” he added.

Consequences of Western sanctions against Russia

Kazakhstan is feeling the consequences of Western sanctions against Russia and Belarus, said Suleimenov.

“We are living in a very difficult neighbourhood and in difficult times… We have the longest border with one of the parties to the conflict, Russia, and we have friendly relations with the other party of the conflict, Ukraine. This is a very difficult situation for us in terms of transport. Our exports go through Russia and Belarus. We see delays in shipments. Those are physical barriers,” said Suleimenov.

One of the key goals that the Kazakh delegation sought to achieve in the U.S. was to talk to American partners so that the sanctions are designed in a way that causes the least collateral damage for Kazakhstan.

“We are not a party to the conflict… We will introduce the system of control over goods, legal and physical entities, and capital which is sanctioned either by the U.S. or EU,” he said.

According to Kazakh Minister of National Economy Alibek Kuantyrov, Kazakhstan has no other choice but to continue trading with Russia.

“Because our economies are strongly interconnected. But we must take into account our own position to be more independent,” said the minister.

The US has been a key partner for Kazakhstan across many areas. The two countries celebrated 30 years of diplomatic relations last year.

The US is also one of the three major investors in the Kazakh economy. According to the U.S. Department of Commerce, U.S. – Kazakhstan bilateral trade totaled $2.5 billion in 2021. U.S. exports to Kazakhstan totaled $807 million and Kazakhstan’s exports to the US totaled $1.7 billion.

The visit of the Kazakh delegation to Washington came just a week after the visit of Uzra Zeya, U.S. Under Secretary of State for Civilian Security, Democracy, and Human Rights, to Kazakhstan, reaffirming U.S. support for President Tokayev’s democratic and economic reform agenda.

“For more than 30 years, the United States has partnered with Kazakhstan, supporting Kazakhstan’s security and democratic growth as anchors to its sovereignty and stability. (…) I am honoured to have had the opportunity to meet with so many inspiring Kazakh leaders, both inside and outside the government. We believe Kazakhstan is a country with a bright future. Kazakhstan’s stability and prosperity depend on harnessing the full potential of its citizenry, strengthening human rights protections, and developing a strong and vibrant civil society, as noted by President Tokayev,” she said during the visit.

While in Washington, the Kazakh delegation met with World Bank Vice President for Europe and Central Asia Anna Bjerde on April 19 to discuss the impacts of the conflict in Ukraine, and potential support for Kazakhstan’s reform efforts with a focus on green transition, governance, and regional development.