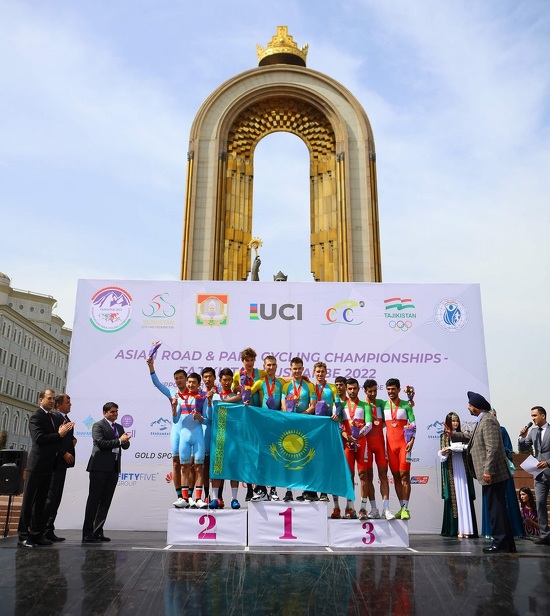 The men’s group race took place on March 29, and was won by Kazakhstan’s athlete Igor Chzhan. He overtook Japanese cyclist Nariyuki Masude, who came second, and Mongolian rider Jambalyams Sainbayar, who claimed a bronze medal. This gold was the seventh in the haul of the Kazakh team in Dushanbe and the third for the Kazakh team in the men’s elite. All men’s adult starts were won by the Kazakh athletes.

On the first day of the competition Evgeny Gidich, Yuriy Natarov, Igor Zhang and Evgeny Fedorov came out the strongest in the team race. Then, Fedorov won the Asian Championships for the first time in his career, making a kind of golden double in Dushanbe, and on Tuesday he repeated his achievement again.

Chzhan became a two-time continental champion at this year’s championship.

Among women, Rinata Sultanova scored herself a two-time medalist, became the champion of Asia in the trial, and received silver in the team race in the women’s elite. Together with her, the silver of that race on March 25 was won by Kazakh athletes Faina Potapova, Makhabbat Umutzhanova and Anzhela Solovieva. In addition, in the group race in the women’s elite on March 29, Umutzhanova and Solovieva took silver and bronze, respectively.

Kazakh riders under 23 – also had a strong showing. On March 28, Gleb Brusensky, who rides for the Astana Qazaqstan Team, triumphed in the group race, and Daniil Pronsky and Nikolya Vinokurov from the Astana Qazaqstan Development Team climbed the podium with silver and bronze medals, respectively.

“We were really determined to have a strong race and try to win all three medals: we took control of the race from the very start, organizing the pursuit of the breakaway and controlling the attacks of the rivals,” Brusensky said after this success. “Our friend Orken Slamzhanov did an amazing job of helping us keep the break under control. About three kilometers from the top of the climb we attacked and it worked. No one managed to follow us, but we managed to open a gap and hold it. Yeah, it was a perfect day for us, everything went according to plan,” he explained.

Kazakhstan’s women unders did not lag behind their peers. Here, Akpeil Osim won the group race, becoming the champion of Asia at the age of 23, and her teammate Svetlana Pashchenko won a silver medal – the representative of Uzbekistan Yanina Kuskova came out in the top three in this race.

And, finally, Alexei Vaganov won another gold medal for the Kazakh national team in the individual time trial among juniors, and in the tandem time trial pilot Maksat Kadyrov and paragoner Kenzhegul Seitzhan won the first bronze in the history of Kazakhstan in paracycling.