International Standards Must Be at Heart of Education System, Says President of KIMEP University

NUR-SULTAN – The main mission of any academic institution is to maximize and optimize the well-being of its students towards the sustainable quality in learning with the help of the Ministry of Education, said Chan Young Bang, the Founding President of the Kazakhstan Institute of Management, Economics and Strategic Research (KIMEP) University, in an interview with The Astana Times. 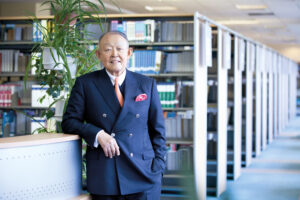 Previously, Dr. Bang held public office in Kazakhstan, particularly as the Economic Advisor to Kazakhstan’s First President Nursultan Nazarbayev and as the Vice Chairman of the Expert Committee in 1990.

Under his leadership, KIMEP University, which was founded in Almaty in 1992, became internationally renowned and accredited with 14 undergraduate and graduate degree programs in seven disciplines and fulfilled the country’s need for Western style education in a broader effort to sustain economic and social change.

“Presidents and faculty members are here to serve students. That implies a global cultural change with the help of the Ministry of Education, which should constantly evaluate and review the level of satisfaction of students and make relevant decisions based on that criterion,” he said.

The multinational teaching staff is represented by qualified specialists, professors and academics from the United States, the United Kingdom, France, South Korea, Germany, Canada, Uzbekistan, Italy and other countries.

“Our academically qualified faculty members hold PhDs in their relevant field from credible Western universities and have a proven record of research and publications,” he said.

Speaking about KIMEP University’s role in the development of the country’s education sector, Dr. Bang pointed out key features, such as internationalization and high rate employability of the student-centered university, as well as qualified professionals and government officials from the list of alumni.

“Many of the over 14,000 graduates have made important contributions to Kazakh society. One of our alumni currently serves as Prime Minister of Kazakhstan. Another alumnus is the current Chairman of Agency for Strategic Planning and Reforms, not to mention a third, one who became the Chairman of the National Bank of Kazakhstan in February this year,” Dr. Bang noted. “Our graduates hold prestigious positions in renowned international companies such as KPMG, PWC, Western Union or Ernst and Young,” he added.

In his opinion, Kazakhstan has witnessed progress in the field of higher education: the signing of the Bologna Declaration, the adoption of the European ECTS credit system, as well as the promotion of the Bolashak scholarship program, which enabled thousands of students to obtain foreign degrees and bring their skills back to Kazakhstan.

Chan Young Bang also outlined what he sees as major deficiencies in the higher education system, including the centralized control in the education process. He is convinced of the necessity to ensure a positive environment promoting competition between institutions, excellence and innovation.

“The role of the Ministries of Education is that of a facilitator, allowing universities and academic institutions to compete and to excel. On the other hand, Kazakhstan inherited features from Soviet times, which affected the education system to this day. Creating a competitive and innovative environment in the higher education system should be based upon different criteria such as the percentage of faculty holding a relevant terminal degree, internationalization, international program-based and institutional accreditations, and employability of students as well as students’ satisfaction”, he said.

Dr. Bang supports initiative and creativity regarding management principles of universities and assumes that education needs to keep up with the times.

“This centralized power brings serious harmful consequences such as nepotism and waste of resources. The functioning and organization of higher education institutions should be based on transparency, credibility, and accountability,” he said. “Professors have to earn relevant degrees, especially when it comes to social sciences and humanities, business and management, or education to provide students with the tools to fill positions in the current market place,” he added.

The beginning of the pandemic revealed the insufficiency of technology infrastructure in schools and universities worldwide. For this story, Dr. Bang also shared the experience of the university in learning during the COVID-19 pandemic.

“We found a qualified organization, SB Science Management group, a German consulting company, and signed a contract with them. Some 111 of our 142 faculty members followed the provided program, got their certificate upon completion, and therefore became fully qualified to teach online and organize classes and curricula,” he said.

Chan Young Bang claimed that higher education institutions should be equipped to enable the development of hybrid and distance learning – thus increasing the geographical reach of high-quality programs.

“In that regard, KIMEP made laptops available for the students who were lacking one so that they could keep studying. The most important issue was to ensure the quality of the programs, which is why we regularly conducted surveys to evaluate the level of satisfaction from the students,” he noted.