NUR-SULTAN – Last week Kazakh tennis fans received a big gift. The national team hosted the national team of Germany in the qualifying tournament of the main international team tournament in women’s tennis titled the Billie Jean King Cup in Nur-Sultan on April 15-16. Fortunately for the Kazakh fans, the result of the match was already decided in the first three matches. 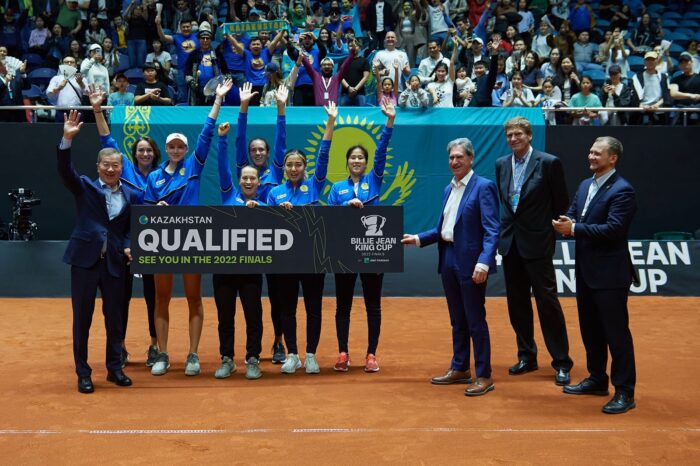 On the first day Yiliya Putintseva took down Angelique Kerber to give Kazakhstan a decisive lead. The German opened the match rather well despite her lack of love for the surface. She was up 5-1 early, faltered a bit later but still won it 6-3. She struggled immensely in the second set falling behind 1-5 and losing it 3-6 in the end.

Struggles continued in the third set as Putintseva simply had all the answers and Kerber was running from one error to another. Putintseva finished it off with 6-2 for a huge point for Kazakhstan.

The matchup between Putintseva and Kerber was always going to be the decisive one as Elena Rybakina, as of the best players in the world, was expected to win.

She did not disappoint in the second tie as she faced Laura Siegemund. Rybakina dominated the match with her powerful groundstroke from start to finish without problem 6-0, 6-1.

That gave Kazakhstan the 2-0 lead after the first day.

After a superb first day for the home team and the 2-0 lead, Rybakina had the chance to clinch it with a win against Angelique Kerber.

The start of the match featured some nerves by Rybakina who was able to win her serves but Kerber had a few break points she did not use.

Eventually, the German did find a breakthrough and she served out the first set with 6-4.

After holding from 15-40 in the first game of the second set Rybakina started to take more risks. It paid off as she broke her opponent taking the 3-0 lead. Boosted with that confidence Rybakina served out the set 6-3.

The excitement did not fade in the third set either as players traded early breaks to keep the tension up. They then traded breaks once more a couple of games later with the score still being tied at 3-3. Eventually, Kerber did find another breakthrough taking a 5-3 lead and coming very close to victory. However, Rybakina completely loosened up and started going for it.

Winner after winner was blasted as Kerber could only watch what was happening. The player from Kazakhstan won four games in a row to finish it off 7-5, sending her nation to the Billie Jean King Cup Finals.

In accordance with the rules of the tournament, it was decided to play the fourth match in doubles.

In this game, the German athletes took a point of honor. Anna – Lena Friedsam and Laura Siegemund won in a bitter struggle 6-2 3-6 (10-6) against Anna Danilina and Zhibek Kulambayeva, who made her debut in matches for the national team of Kazakhstan.