NUR-SULTAN – Measures to mitigate punishment have been taken for almost half of the suspects in connection to the tragic events in January, reported the General Prosecutor’s Office during the Central Communications Center briefing in the Kazakh capital on April 19. 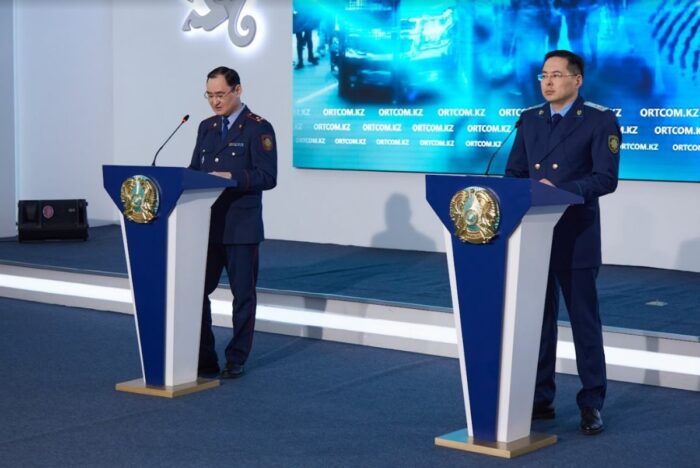 Head of the Investigative Department of the Ministry of Internal Affairs Sanjar Adilov and Deputy Head of the first Service of the General Prosecutor’s Office Yeldos Kilymzhanov. Photo credit: ortcom.kz.

The Prosecutor General’s Office has been investigating 4,849 criminal cases of this category and 627 suspects are being held in custody.

“We are working to mitigate punishment considering the person’s current health condition and other materials. Some 280 suspects have been released from custody with a written undertaking not to leave, on bail, house arrest and personal guarantee. Prosecutors meet with relatives of detainees and persons involved, check their arguments, and then, the decisions are made to change the preventive measures or not,” said Deputy Head of the first Service of the General Prosecutor’s Office Yeldos Kilymzhanov.

It is reported that a unified plan of attacks in January was developed as the Prosecutor General’s Office continues to identify and prosecute the criminal groups.

Suspects from the Almaty Region, who have been identified, paid the rioters, and were also involved in destroying the property and seizing state facilities in Taldykorgan. They paid from $20 to $100 per person for participation in the pogroms.

“These facts were revealed during the investigation and were confirmed by interrogations of persons suspected of participating in the attacks. A resident of the Zhambyl region, created a Telegram channel and spread detailed instructions on making barricades and Molotov cocktails, and provoking attacks on law enforcement officers and seizing buildings. Information about the movement of the rioters and plan of attack were also available on this account on 5-6 January in the Zhambyl region. An analysis of criminal cases shows that the criminal groups developed similar scenarios and had a common coordination in other regions,” said Kilymzhanov.

Sanjar Adilov, the Head of the Investigative Department of the Ministry of Internal Affairs, said that the internal affairs bodies continue their work to restore law and order, identify looters and provide damage compensation for people. As a result, 255 criminal cases against 402 suspects have been filed in court.

“The largest number of criminal cases belongs to Almaty (183), the Almaty region (46), Zhambyl region (10) and the Department of Police on Transport (10). Damage compensation worth 95 million tenge (US$231,000) have been allocated,” said Adilov.

The police also seized the stolen property of people worth more than 340 million tenge (US$762,000).