By Assem Assaniyaz in International on 15 April 2022

NUR-SULTAN – The Permanent Mission of Kazakhstan to the United Nations European Office (UNOG) and the Geneva Center for Security Policy (GCSP) hosted an international conference on Kazakhstan’s initiative to establish the International Agency for Biological Safety (IABS) in Geneva on April 12, reported the press service of the Ministry of Foreign Affairs. 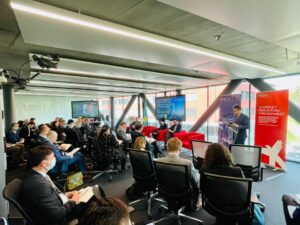 Kazakh President Kassym-Jomart Tokayev proposed to establish a special multilateral body – the IABS, based on the 1972 Biological Weapons Convention (BWC) at the 75th session of the United Nations General Assembly on Sept. 23, 2020.

The government officials and academics, including representatives of the UN Security Council’s five permanent members (P-5) China, France, Russia, the U.K., and the U.S., as well as reputable experts in the field of biological security and the representatives of international organizations attended the conference.

The head of the delegation of the MFA of Kazakhstan, Director of the Department of International Security Kairat Sarzhanov focused on the rationale of the initiative, the value of the IABS and current challenges in the field of biotechnology. He proposed to develop a Catalog of Confidence-Building Measures, which can provide much-needed predictability and transparency.

“Our proposal deals with key concerns in the sphere of biotechnologies, such as the lack of preparedness for large-scale spread of biohazard, the possibility of dangerous bacteriological agents falling into the hands of criminal non-state actors, as well as risks for public health related to peaceful research, such as accidental release of harmful biologically active substances,” Sarzhanov said.

The participants stressed the relevance of Kazakhstan’s initiative in the context of the COVID-19 pandemic and the rapid development of biotechnologies, and agreed on the necessity of the regulation by a specialized international body.

Discussions were also held on the proposed objectives and functions of the IABS, its accountability to the UN Security Council, based on the Concept Note, which was circulated by Kazakhstan in 2021. Special attention was paid to the verification mechanism, related risks of leakage of confidential information and intellectual property, and possible functional overlap.

According to President Tokayev, the mission of the agency will be to advance peace, health and well-being by initiating and ensuring safety and control measures related to potential biological and biotechnological threats and by promoting biological development for peaceful purposes.

Today, Kazakhstan is a role model for the world as a country that voluntarily abandoned its nuclear missile arsenal, closed the world’s largest Semipalatinsk nuclear test site and dismantled biological weapons objects. Starting from that time, biological research activities have been of a purely peaceful nature and are carried out in close cooperation with the international community. However, the ongoing erosion of the non-proliferation regime and the COVID-19 pandemic against the background of increased geopolitical turbulence has set the biosafety issues higher on the agenda once again.