By Staff Report in International on 13 April 2022

NUR-SULTAN – The European Union seeks to strengthen cooperation between Kazakhstan and the EU as part of the EU Strategy for Central Asia and the new Global Gate Strategy. This was announced during the 19th meeting of the Kazakhstan – EU Parliamentary Cooperation Committee in the Kazakh capital on April 12, reported the press service of the Mazhilis, a lower house of Parliament. 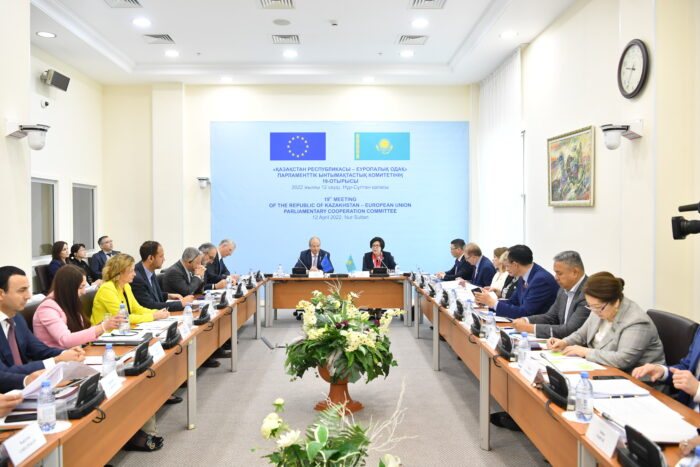 The 19th meeting of the Kazakhstan – EU Parliamentary Cooperation Committee was held in the Kazakh capital on April 12.

The group of European Parliament (EP) deputies, who paid an official visit to Kazakhstan April 11-13, included First Deputy Chairman of the EP Delegation for Cooperation with Central Asia and Mongolia and Deputy Chairman of the EP Committee on Transport and Tourism Andris Ameriks, member of the EP Committee on Foreign Affairs Francisco Millan-Mon and political advisers of several leading party groups in the European Parliament.

The members of the European Parliament noted the importance of a high level of trade and economic cooperation between Kazakhstan and the EU. They also seek to strengthen the bilateral dialogue in the field of human rights and the rule of law.

The prospects of cooperation between Kazakhstan and the European Union, development of the inter-parliamentary dialogue, and the implementation of the Enhanced Partnership and Cooperation Agreement were on the agenda of the event.

It was agreed to host the 20th meeting of the Parliamentary Cooperation Committee in Brussels in 2023.

The members of the European Parliament also met with Chairman of the Senate Committee on Foreign Affairs, Defense and Security Mukhtar Kul-Mukhammed.

“We are ready for open and constructive dialogue with the members of the European Parliament on all issues, including democratization, the rule of law and human rights. Kazakhstan enters its historical stage. President Kassym-Jomart Tokayev initiated important political and democratic reforms. Over the past two years, the President initiated four reform packages aimed at implementing phased political transformations,” Kul-Mukhammed said.

Earlier, the European deputies met with the Deputy Prime Minister – Minister of Foreign Affairs of Kazakhstan Mukhtar Tileuberdi to discuss the reforms put forward by the President of Kazakhstan and other initiatives, reported the ministry’s press service.

“The timely visit of the EP delegation to Kazakhstan will give additional impetus to strengthening the political and inter-parliamentary cooperation between Kazakhstan and the European Union, as well to the search of new promising niches of cooperation under the Kazakhstan – EU Enhanced Partnership and Cooperation Agreement,” said Tileuberdi during the meeting.

Ameriks noted that Kazakhstan is a key partner for the EU in the Central Asian region. “Much has changed since I visited Kazakhstan two and a half years ago, but Kazakhstan and the European Union remain close partners… We support the course of political reforms in the country and are closely following its implementation in practice,” he said.