By Zhanna Shayakhmetova in Business on 19 April 2022

NUR-SULTAN – European Bank for Reconstruction and Development (EBRD) President Odile Renaud-Basso spoke about priority investment projects in Kazakhstan and how reforms influence the bank’s activities in an exclusive interview with the Astana Times. 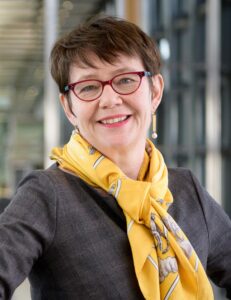 The EBRD has been actively engaged in promoting green investments in Kazakhstan that align with Kazakhstan’s plans for carbon neutrality by 2060. Could you talk about the details of the green projects that the EBRD is engaged in? What has been already achieved? What are the plans in the short and medium terms?

Historically, the EBRD is the largest investor in green energy in Kazakhstan. In 2021 over 40 percent of the bank’s investments in the country (worth US$ 630 million) were green. Last year, the bank and Kazakhstan also agreed to work together on a long-term strategy to achieve carbon neutrality of the country’s power sector by 2060. This commitment declared at the COP26 conference clearly demonstrates the country’s climate ambitions and the bank stands ready to support this drive.

In terms of future plans, we’ll be paying special attention to financing green and energy efficient technologies through green bonds, for instance those considered by the national grid operator KEGOC and QazaqGaz. This should improve their presence in both domestic and international capital markets, help them finance key infrastructure and facilitate better integration of renewables into the existing networks. We’ll also be mobilizing concessional green financing. One of EBRD’s important objectives is to decrease Kazakhstan’s reliance on coal and support greater use of gas as a transitional fuel. We are considering a relevant project with Almaty’s Combined Heat and Power Plant (CHP). The EBRD is working with Samruk Kazyna subsidiaries to explore opportunities in the area of carbon neutral fuels like green hydrogen. The Bank is also helping the Ministry of Energy in developing up to 250 MW wind auctions in autumn 2022.

The EBRD has also aligned with the Agency of the Republic of Kazakhstan for the Regulation and Development of Financial Markets (ARDFM) to promote environmental, social and governance (ESG) standards and good corporate climate governance (CCG) among financial institutions in Kazakhstan. What can you say about those projects?

The EBRD and the Agency of the Republic of Kazakhstan for the Regulation and Development of Financial Markets (ARDFM) have recently joined forces to promote environmental, social and governance (ESG) standards and good corporate climate governance (CCG) among financial institutions in Kazakhstan. We will develop and implement guidelines and regulations to support Kazakhstan’s transition to a low-carbon and climate-resilient economy. A memorandum of understanding recently signed by the EBRD and ARDFM establishes a framework of cooperation to support financial institutions in adopting a strategic approach to addressing ESG and climate-related risks, as well as enhancing CCG. The partnership will also build capacity for the observance of the best ESG and CCG practices by banks in Kazakhstan. The EBRD’s cooperation with ARDFM will help to build up capacity to improve ESG and climate risk management, promote transparency and disclosure, and improve access within the sector to emerging global best practice.

What is your opinion on political and economic reforms proposed by Tokayev to build New Kazakhstan? How do those reforms come into play with the EBRD goals and plans in Kazakhstan?

We warmly welcome the reforms set out by President Tokayev recently as part of his New Kazakhstan concept. The emphasis on removing the influence of vested interests from Kazakhstan’s public life and increasing openness and accountability are vital to advance our shared priorities of boosting Kazakhstan’s role as a transport corridor between Europe and Asia and the role of the private sector, increasing investment in the green transition and creating jobs. We look forward to learning more about the details of the proposed reforms and stand ready to support the Kazakh authorities with their further development and implementation.

How do you assess the impact of the current geopolitical situation in the region (particularly, sanctions on Russia) to investment attractiveness of Kazakhstan? What consequences geopolitical instability might have on the EBRD activities in Kazakhstan?

The EBRD tried to provide early assessment of the impact of the war on Ukraine for Central Asia and Kazakhstan in particular in its recently published Regional Economic Update report. Russia is Kazakhstan’s most important international partner, with a 42 percent share in its imports. The domestic labor market may be slow to create new jobs because of major uncertainty affecting investment in Kazakhstan. Labor market pressures coupled with recent internal political upheavals, may have implications for the continued political stability. The first weeks of war resulted in a loss of value of about 20 percent of Kazakhstan’s national currency despite increased policy rates and market interventions by the Central Bank. The disruption of the traditional supply chains will affect all Central Asian countries, but will be particularly acute for countries with the highest share of transit trade through Russia such as Kazakhstan. In the financial sector, Russian banks that have subsidiaries in Kazakhstan are affected by the sanctions. This, in turn, poses threats to the national financial system given its significant exposure to such banks. On a brighter side, Kazakhstan, as a net energy exporter, will not be affected by growing energy prices. The same goes for food commodities and metals as Kazakhstan will enjoy increased foreign currency earnings and budget revenues being their exporter.