By Zhanna Shayakhmetova in International on 28 April 2022

NUR-SULTAN – This year saw the publication of Kazakh author Togzhan Kassenova’s “Atomic Steppe: How Kazakhstan Gave Up the Bomb,” the story of how Kazakhstan voluntarily gave up its nuclear arsenal after the collapse of the Soviet Union. 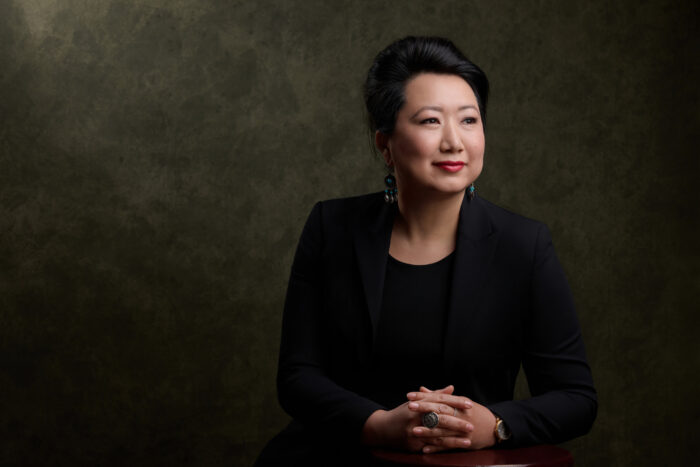 Recently, a presentation of the book was also held at the Kazakhstan Institute for Strategic Studies under the President of Kazakhstan (KazISS) to honor well-known scientist and the founder of KazISS Oumirserik Kassenov. Kassenov was a prominent expert on nuclear non-proliferation in the country and his daughter continued the work of her father and became a researcher in the field of nuclear policy.

Kassenova, a Washington, DC-based senior fellow at the Center for Policy Research and a nonresident fellow in the Nuclear Policy Program at the Carnegie Endowment for International Peace, has remarkable expertise in the nuclear politics, weapons of mass destruction nonproliferation, strategic trade controls, sanctions implementation, and financial crime prevention. She holds a Ph.D. in Politics from the University of Leeds and is a Certified Anti-Money Laundering Specialist. She also served on the UN secretary general’s Advisory Board on Disarmament Matters from 2011 to 2015.

Kassenova spoke about her book and how she came up with the idea of the book in a recent interview for this story.

What made your write your book Atomic Steppe: How Kazakhstan Gave Up the Bomb? 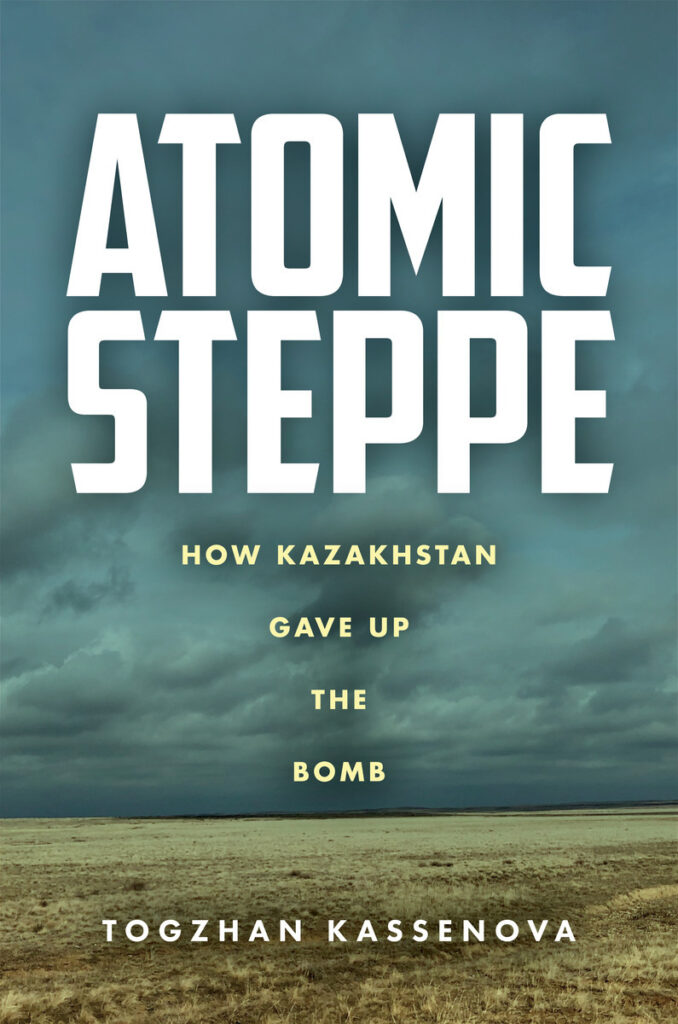 As an expert in nuclear politics, I believed Kazakhstan’s nuclear story deserved to be told to an international audience. I was moved by the stories of nuclear test survivors and wanted them to be heard. I also wanted the international community to appreciate Kazakhstan’s complex nuclear challenges in the early 1990s and describe how a young country was navigating them. It is an inspiring story, especially in the current circumstances of high tensions in the world.

As a Kazakh, I understood that nuclear history played an important part in Kazakhstan’s nation-building, but we, as a society, did not have a chance to reflect on it. Soviet nuclear tests at the Semipalatinsk Polygon left a lasting negative legacy and will continue to haunt the nation for a long time to come. But on the positive side, the public’s fight against nuclear tests and our country’s deliberate choice to be nuclear-free laid the foundation for what Kazakhstan became as a state – a society that reclaimed agency over its own land, a responsible member of the international community that gave up its nuclear inheritance.

I was also driven by personal reasons. My father’s family lived in Semipalatinsk, and I feel a deep affinity for the Semipalatinsk region. My late father, Oumirserik Kassenov, the founder of Kazakhstan’s first analytical institution (Center for Strategic Studies, which grew into the Kazakhstan Institute of Strategic Studies), advised Kazakhstan’s leadership on nuclear policy. My book is a tribute to him and people like him who were present at the creation of independent Kazakhstan.

What did you set for yourself as the main goal by deciding to write?

My main goal was to tell Kazakhstan’s nuclear story within a broader context of Kazakhstan’s experience as a Soviet republic and as an independent state. In a way, I used a nuclear lens to tell a country’s history. In terms of writing style, I aimed to make Atomic Steppe accessible to a broader audience. While I know my book will not be sold at airport bookstores, I hope its readers will include those who do not know much but want to learn about Kazakhstan, Central Asia, or nuclear politics.

What were the biggest revelations for you as you researched this subject over so many years, especially for this book?

One of the hardest revelations was the extent of disregard for human life by the Soviet government. It is one thing to know that the Soviet military did not care about the local people or the environment; it is another – to read contemporaneous documents that show in black and white the policy of secrecy, outright lying, and condescending, dismissive attitude toward the people of Kazakhstan. I will give a couple of examples. The Soviet Institute of Biophysics, affiliated with the military-industrial establishment, recorded the radioactive contamination in the areas near the Polygon in its internal reports. At the same time, the same Institute lied to the local government of the Semipalatinsk region that nuclear tests did not cause any contamination.

Or there is another telling episode. During the visit of a Soviet government delegation to the Semipalatinsk region, the local authorities brought out mentally disabled children to convey to the high-powered decision-makers from Moscow that nuclear tests harmed people. On seeing the children, someone on the delegation quipped that “it would be better if Kazakhs drank less.” In my research, I came across stories like this again and again.

An inspiring revelation was the courage of medical professionals from Kazakhstan’s Institute of Regional Pathology, who in the late 1950s managed to collect clinical data on the failing health of people who lived close to the Semipalatinsk Polygon. They truthfully recorded what they observed despite knowing they could have ended up being punished by the state.

What made me feel most proud was the audacity of Kazakhstan’s policymakers in the very first years of independence. Kazakhstan, a young country facing enormous challenges – from an economy in crisis due to the Soviet collapse to the complex geopolitical situation – negotiated with the world’s only superpower, the United States. Kazakhstan’s leaders had a clear idea of what the country needed in return for giving up nuclear inheritance (security guarantees, foreign direct investment, technology, access to international institutions and markets), and they worked hard to get it.

Will you be writing anything further, and what are your plans?

“Atomic Steppe” is being translated into Kazakh, and I hope translations into other languages will follow. I also hope that there will be a documentary based on my book one day.

As for my plans, I would like to pick up on the themes that I couldn’t develop in my book and write shorter pieces. For example, as the only country that experienced a nuclear attack, Japan has done a lot to help the Semipalatinsk region. Japanese and Kazakh scientists conducted comparative studies and found similarities in how Hibakusha (survivors of nuclear attacks in Japan) and survivors of nuclear tests in Kazakhstan describe and live through their experiences.

Nowadays, we hear a renewed discussion about whether Ukraine should have kept its nuclear weapons. What about Kazakhstan? What can you tell those who question Kazakhstan’s non-nuclear choice?

For Kazakhstan, it didn’t make any technical or political sense to try and keep nuclear weapons. There was no access to command and control. Ethnic Kazakhs did not serve in the Soviet strategic nuclear forces. Kazakhstan could have used the nuclear material and infrastructure it controlled, but that would make Kazakhstan a completely different country. It would be a country shut off from the outside world, a Central Asian North Korea. Kazakhstan’s strategic decision to give up its nuclear inheritance is an important reminder that a decision not to undermine the nuclear nonproliferation regime and give up a nuclear option can sometimes be the only and the best choice for a country’s statehood and sovereignty. It’s because Kazakhstan gave up its nuclear inheritance, but received so much support from the outside, that it was able to build itself upright—to become the country that it is today.

The book is available on Stanford University Press and Amazon websites.

The trailer featuring the synopsis of the book is available on the video below.

Kazakhstan is one of the world leaders in advocating for banning nuclear weapons. The first test of nuclear weapons took place in Kazakhstan’s steppe in 1949. From 1949 to 1989, at least 468 nuclear tests were carried out at the Semipalatinsk Nuclear Test Site, during which at least 616 nuclear and thermonuclear devices were detonated. According to the experts, the total power of nuclear charges tested on the surface before 1963 was 2,500 times higher than the power of the atomic bomb dropped on Hiroshima.