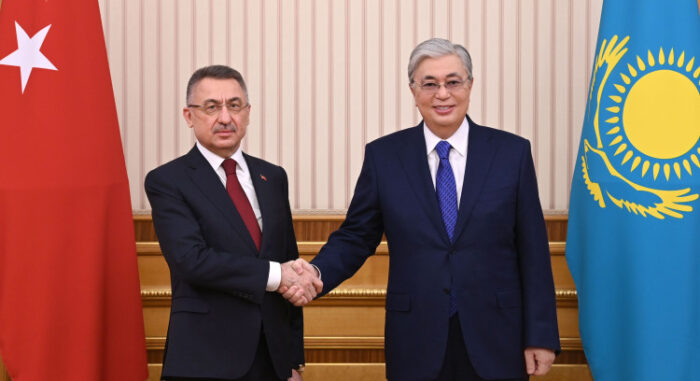 During their meeting in the Akorda, President Tokayev and Fuat Oktay discussed the prospects for the development of the Kazakh-Turkish strategic partnership and acute issues on the international agenda.

President Tokayev, who is expected to visit Turkey in May at the invitation of Turkish President Recep Tayyip Erdogan, noted an excellent level of bilateral relations in the political, trade, economic, investment, cultural and humanitarian areas and stated the need for further enhancement.

Fuat Oktay also conveyed congratulations from the Turkish leader on the 30th anniversary of the establishment of diplomatic relations between Kazakhstan and Turkey. He commended the measures taken by the country to overcome recent challenges and implement reforms.

The same day, Oktay attended a business forum that gathered more than 250 representatives of business, government agencies and the quasi-public sector from the two countries to seek ways to strengthen business ties between Kazakhstan and Turkey. Ten commercial agreements worth $500 million were signed at the forum, including to build transport and logistics centers with air cargo in western Kazakhstan, a pharmaceutical plant in Almaty, an enterprise for the production of medical products, masks and respirators, a finally, a plant for the production of stainless steel products and metal steel structures.

Besides strong cultural ties, Turkey remains one of key trade and investment partners of Kazakhstan investing more than $3.5 billion in the Kazakh economy over the past 15 years.

Around 3,700 companies with Turkish capital operate in Kazakhstan. Some 58 joint projects worth nearly $2 billion have been implemented in mining and metallurgy, infrastructure, food processing and pharmaceuticals.

Smailov also spoke about the economic growth that Kazakhstan has managed to achieve despite the COVID-19 pandemic. Last year’s industrial growth was 3.8 percent, including 5.5 percent growth in the manufacturing industry.

“The key growth factor was high investment activity in non-resource sectors. Investments in this sector grew by 9.5 percent. Gross inflow of foreign direct investments in Kazakhstan for the nine months of 2021 doubled up to $18.8 billion,” he said, emphasizing the continued efforts of the government to improve investment attractiveness.

Currently, the government is preparing a new investment policy concept with a focus on strengthening the requirements of ESG (environment, social and governance) criteria to which investors are increasingly paying attention to when making their decision to invest in a country or not. Global energy and technological transition trends will also be reflected in the document.

Among the items to consider are measures to optimize and simplify tax regimes, subsidy schemes and other incentives for investors in the priority sectors of the economy. Smailov invited Turkish companies to expand the scope and depth of their investment ties and actively participate in the implementation of new joint investment projects.

“Metallurgy and mining is a key sector of our economy, which concentrates around 20 percent of industry and national exports. There is also a dynamic growth in the volume of exports of engineering products, as well as a consistent decline in the volume of imports,” said Smailov.

Agriculture is also ripe with opportunities in Kazakhstan where nearly 14.5 percent of the population are employed in the sector.

“The potential for mutually beneficial cooperation in the agrarian sphere is really huge,” he added.