Towards a New Kazakhstan: From Unrest to Stability and Reforms

Kazakhstan’s January unrest caught international observers by surprise, both in Kazakhstan and elsewhere. Kazakhstan, which had successfully managed in the three decades of its journey as an independent nation to become a beacon of stability, was rocked by violent protests which caused over 200 casualties and considerable damage to public property, and left a nation and its international partners searching for answers. Many questions still abound surrounding the causes and consequences of the tragic January events, as well as the identity and motives of the perpetrators of violence. While the dust has settled and life largely returned to normal, the investigations continue into the January events, the preliminary results of which are expected in March. 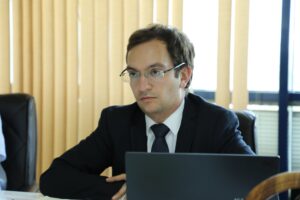 What is certain is that President Tokayev’s firmness in his response to the January events, and succeeding in bringing all the national security apparatuses under his control, was decisive. The further destabilisation of Kazakhstan would have had implications far beyond Kazakhstan’s borders for Eurasian stability.

During a working visit to Kazakhstan in February 2022, I had the chance to join a group of nine European journalists to travel across various Kazakh cities and meet with relevant stakeholders including, inter alia, Secretary of State Erlan Karin; Ministry of Foreign Affairs officials; Deputy Chief Prosecutor Bulat Dembayev; Human Rights Commissioner Elvira Azimova; local officials in the cities of Almaty and Shymkent; and members of public commissions led by prominent human rights lawyers. We were able to familiarise ourselves with the ongoing investigations into the January events and the preparatory work towards the substantial package of economic and political reforms that President Tokayev will be announcing in a major policy speech in mid-March, aiming at addressing the underlying causes of the genuine grievances of the population and preparing the country for the next phase of development.

Rather than slowing down the momentum for reforms, the January events have in fact achieved the opposite, according to all of our interlocutors. The tragic events of January constitute an unfortunate and brief parenthesis in an otherwise stable journey since independence, and have not altered the country’s upward development trajectory or priorities. The country is focusing now on building a “new Kazakhstan”, a unique opportunity for a quality reloading of the country, in which past mistakes can be diagnosed and assessed, and laying the foundations for a stable and inclusive future, in which all citizens are beneficiaries of Kazakhstan’s wealth and  prosperity.

Pointing to the urgency of reforms, a package of political reforms which was initially scheduled to be announced during the state-of-the-nation address in September will be set forth by President Tokayev already in mid-March.

The early phase of reforms under President Tokayev during his first two years as President showed some initial steps in enhancing the country’s electoral process; increased channels of communication between society and government; empowering of women; and eliminating obstacles to peaceful assembly.

Let us take the law of peaceful assembly as an example. This law was unchanged between 1995 and 2020, and simply prohibited holding public rallies without explicit permission from authorities, which was rarely granted. For holding public rallies, President Tokayev changed the principle of requiring permission from authorities; to notifying intent to the authorities. Before the adoption of this law, Kazakhstan saw only a handful of rallies a year. In the period between June 2020 and June 2021, government figures refer to about 500 peaceful rallies taking place in the territory of Kazakhstan.

On the economic front, the next phase of reforms will have to confront some of Kazakhstan’s systemic and structural challenges which have held back the potential of the country:

– Bringing inflation down to manageable levels of 3-4 percent;

– Reducing prevailing inequalities between a small wealthy minority and the rest of the population;

– Reducing the state’s involvement in the economy and getting rid of monopolistic and oligopolistic practices;

– Greater diversification and privatization with a particular focus on stimulating the potential of Small and Medium Sized Enterprises (SMEs) as engines of growth, job creation and innovation;

– Paying particular attention to the digital and the green transitions.

To reassure foreign investors, a new concept of Investment Policy is being developed to increase Kazakhstan’s investment attractiveness with due account of the increasing role of Environment, Social and Governance (ESG) requirements, global green energy and technological transition. This will certainly open new avenues for trade and investment ties between Kazakhstan and its foreign partners including the European Union. It is worth noting that Kazakhstan had made great strides in the World Bank’s Doing Business Index in recent years, even if the index has now been discontinued for reasons that have nothing to do with Kazakhstan.

Economic reforms will also take into account the aggravating international context. The close links to the Russian economy could entail possible negative spillover effects on the Kazakh economy, including the rapid devaluation of the Kazakh Tenge. The sanctions have also elevated the urgency to diversify trade routes and corridors, including increase the capacity of the Trans-Caspian International Transport Route, increasing the cargo passage through the Aktau and Kuryk seaports in order to ensure uninterrupted transportation of goods to European countries.

One of the biggest areas of work as already hinted by President Tokayev in his public appearances this year is the issue of redistribution of wealth, linked to his goal of “de-oligarchization of the economy”. To this end, a special fund called “Qazaqstan halqyna” (‘for the people of Kazakhstan’) has been established in January. In our talks with the Chairman of the Fund Bolat Zhamishev, he explained that since its creation in January, the fund has received 120 billion Tenge (EUR 250 million) in donations from over 200 legal entities. Funds will be used for projects in healthcare and education, among other areas.

On the political sphere, more gradual changes are foreseen and we should not expect any ‘shock therapy’ in this regard.  Last year, Kazakhstan became the first country in Central Asia to directly elects mayors of villages and rural districts. Our interlocutors said the country was ready to expand such practice to larger units in the administrative-territorial hierarchy of Kazakhstan in the short-to-medium term. The issue of greater decentralisation of power from the executive to the legislative branch should also be on the agenda, as well as the institutionalisation of the concept of political opposition. As one interviewee told us, “the opposition should be in the parliament, not only in the streets!”. This gives a sense of where reforms are heading.

Kazakhstan is a country on the move. The society I encountered is vibrant, active, demanding, restless and waiting for reforms. The pressure is high on the political leadership to materialise these demands for change. As one of our interlocutors in Almaty put it: “we are reaching the threshold of new changes, on a scale comparable to Perestroika”.

Alberto Turkstra is a Central Asia expert and Project Manager at the Brussels-based Diplomatic World Institute. Previously, he worked at the European Commission’s Directorate-General for Development Cooperation as Blue Book trainee and as cooperation officer for Turkmenistan, as well as at the European Institute for Asian Studies.