NUR-SULTAN – Kazakhstan and the United States agreed to develop educational programs to expand women’s economic opportunities, reported Inbusiness.kz. This was announced during the meeting initiated by the Astana International Financial Center (AIFC) with the participation of representatives of the United States and Kazakhstan on March 14. 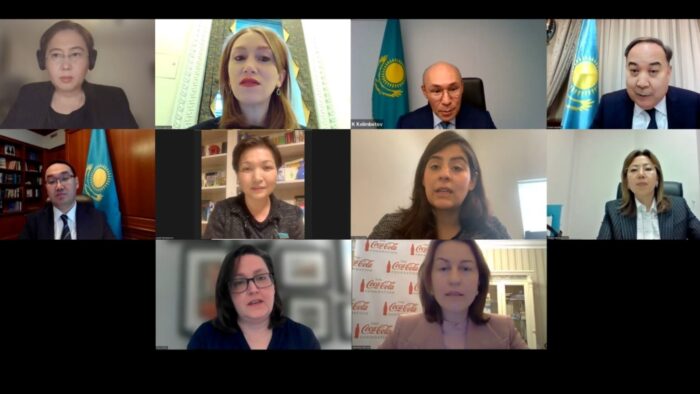 According to Chair of the National Commission on Women’s Affairs, Family and Demographic Policy Lazzat Ramazanova, the country is observing an increased demand for advanced training programs for women. The Academy for Women Entrepreneurs implemented by the U.S. Department of State is one of the initiatives that contributes to women’s economic empowerment.

The Academy for Women Entrepreneurs has been launched in more than 80 countries and provided support for 16,000 women entrepreneurs to develop their businesses and adapt to new economic conditions. The AIFC plans to expand this program in Kazakhstan.

“The major proportion of women is engaged in small businesses. They need additional competencies. In this connection, it is important to develop educational projects to help women build modern business processes, develop new products. The National Commission welcomes the initiatives launched by the international institutions and is ready to implement programs in the country and provide the support,” said Ramazanova.

Yerzhan Ashikbayev, the Ambassador of Kazakhstan to the United States, noted that women entrepreneurs play a major role in creating jobs and ensuring economic growth in the country. Establishing bilateral alliances for women empowerment will bring Kazakh-American relations to a new level.

Rachel Vogelstein, who serves as a Senior Advisor for the White House Gender Equity Council, said that the U.S. administration welcomes Kazakhstan’s initiative to adopt a national action plan on gender policy and seeks to continue discussions held with Katrina Fotovat, the Senior Official to the Secretary of State in the Office of Global Women’s Issues as part of the Astana Finance Days 2021 conference.

The USAID will also continue to support the Kazakh government in establishing women’s entrepreneurship development centers nationwide. The initiative aims to provide a platform for women entrepreneurs for training and consultations related to start-ups, expansion and the development of businesses and creating online communities.

Launched in 2019, the Providing Opportunities for Women’s Economic Rise (POWER) project connects the U.S. private sector with U.S. overseas missions to help women executives in the U.S. to develop partnerships in emerging markets and build the cross-border and global professional network of women entrepreneurs.

POWER is working with the U.S. Embassy in Kazakhstan through the Born Nomad project, which aims to support women entrepreneurs, promote traditional crafts in foreign markets and preserve cultural heritage through creative industries.

AIFC Governor Kairat Kelimbetov, Deputy Chief of Staff of the President – Special Representative of the President for International Cooperation Erzhan Kazykhan, Chair of the Agency for Regulation and Development of Financial Market Madina Abylkassymova, Director of the SABIT program for the U.S. Department of Commerce Tracy Rollins, Regional Manager for Public Affairs, Communications and Sustainability of Coca-Cola Caucasus and Central Asia Alexandra Akkirman also attended the online meeting.