Guarantor of Independence: On 30th Anniversary of Kazakhstan’s Membership in UN

In the second half of the 20th century, for many new states, access to the high tribune of the UN meant international recognition of their sovereignty and independence. The same was true for the Republic of Kazakhstan, which joined the United Nations on March 2, 1992. 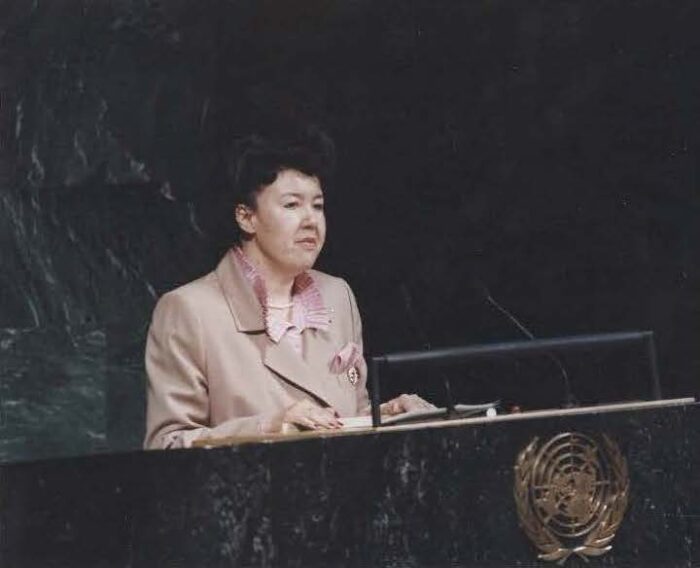 On this historic day, our new independent state was recognized as a full member of the world community and a full-fledged subject of international law. Since that day, the United Nations became the guarantor of sovereignty and international tribune for our young state.

Membership in the UN contributed to progressive establishment of a new state on the world arena, strengthening its national security. By joining the Organization and taking an active part in its work, Kazakhstan received the right and genuine opportunity to make its contribution to the solution of urgent international problems, elaboration of approaches and resolutions on many issues, particularly those that are in the sphere of vital interests of our country. Naturally, like all members of the UN, Kazakhstan has sought to protect its own national interests, especially in creating favorable conditions for its development and full integration into the international community and the global economic system. 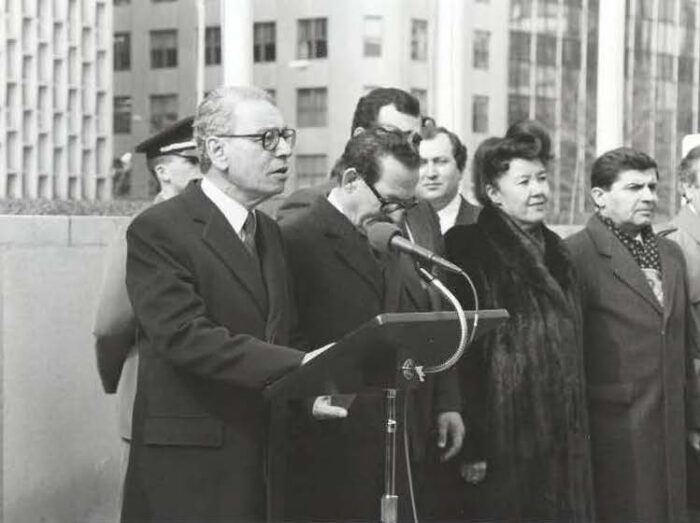 By virtue of fate, I was entrusted by First President Nursultan Nazarbayev to prepare Kazakhstan’s accession to the UN, to create the foundation for our cooperation with this major international organization and to represent our country in it for eight years.

On Dec. 20, 1991, I arrived in New York, where the UN is headquartered, and assumed the post of Senior Counselor to the Permanent Mission of the USSR (later the Russian Federation) to the UN and the Representative of Kazakhstan.

Those unforgettable days of late December 1991 were filled with the breathtaking dynamism of a truly dramatic moment of geopolitical shift on the world stage, caused by the collapse of the Soviet Union, the end of the Cold War and the emergence of new independent states on the global political map. On Dec. 21, at the Alma-Ata meeting of heads of sovereign states, which created the Commonwealth of Independent States, it was decided that the Russian Federation would continue the USSR’s membership in the UN and that new independent states would join the Organization. On Dec. 24, the flag of the Russian Federation, which became a permanent member of the Security Council, was hoisted at the UN instead of the flag of the USSR. Incidentally, African ambassadors later told me that they had asked the U.S. Ambassador to the UN to give this seat to Africa, not represented among the permanent members of the Security Council but had been refused. On the same day, I sent to the Head of State a draft text of a statement on joining the UN that I received from the Secretariat of the Organization. 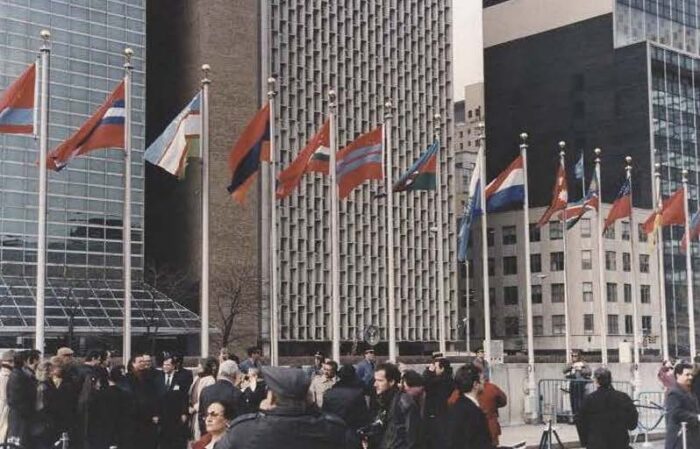 On Jan. 23 1992, after considering our application, the UN Security Council recommended that the General Assembly admit the Republic of Kazakhstan to the UN. In his statement on behalf of the members of the UN Security Council, the President of the Security Council commended this decision as a historic event and expressed his confidence that Kazakhstan, as a peace-loving nation, capable and prepared to fulfill its obligations under the UN Charter, would contribute actively and constructively to the implementation of the purposes and principles of the Charter and would make an important contribution to all areas of the work of the Organization. Kazakhstan was the first to apply and the first to receive a recommendation from the Security Council, but it was necessary to wait for other states prior to the plenary session of the General Assembly, which also went through the established procedures.

Those days of January 1992 were filled to the brim with work – meetings with the President of the Security Council, the President of the 46th session of the General Assembly, the Secretary-General and his deputies, ambassadors of the UN member states, members of the Secretariat, preparation of documents for meetings of the Security Council and the General Assembly. Their attitude to the admission of our country to the UN was favorable. The only question that arose was about the inherited nuclear weapons, but I provided thorough clarifications about the firm commitment of our state to the principle of non-proliferation of nuclear weapons, which is expressed in the Law “On State Independence” and the statements of the top leadership of the country.

On March 2, 1992, a historical plenary session of the 46th UN General Assembly was held, during which the Republic of Kazakhstan was unanimously admitted as a Member of the United Nations. Along with our country, seven new states of the CIS, as well as the oldest republic in the world, San Marino, became members of the UN. After the plenary session, the state flags of the new UN member states were hoisted in a solemn ceremony in front of the Organization’s headquarters. This marked the international recognition of the state sovereignty and independence of our country. We became the 168th member of the Organization, bringing the total that day to 175 members.

I am eternally grateful to fate for those moments of extraordinary emotional elation and joy, the highest pride for my country, which I had the opportunity to experience, speaking on that historic day on behalf of the President and the people of Kazakhstan, seeing the State flag of our country raised above the headquarters of the most prestigious international organization in the world.

From the first days of its membership in the UN, Kazakhstan took an active stance in addressing the most pressing international problems and issues on the agenda of the Organization. The voluntary renunciation of the world’s fourth most powerful nuclear arsenal, which we inherited, and the closure of the Semipalatinsk test site were highly praised at the UN as a real contribution of the new independent state to disarmament, strengthening the nuclear nonproliferation regime and ending nuclear testing on the planet. The first international initiative of Kazakhstan was to convene the Conference on Interaction and Confidence Building Measures in Asia (CICA), which was put forward at the 47th session of the UN General Assembly in 1992. As a result of active diplomatic efforts, today the CICA has become a genuine contributor to strengthening security and cooperation on the Asian continent, uniting 27 states.

The first international treaties that Kazakhstan joined were the Treaty on the Non-Proliferation of Nuclear Weapons and the Convention on the Rights of the Child. Kazakhstan is one of the initiators of the Central Asian Nuclear-Weapon-Free Zone, which entered into force in 2009 as the only such zone in the northern hemisphere. Recognizing Kazakhstan’s contribution to nuclear disarmament, the UN General Assembly declared August 29, the day the country closed the Semipalatinsk test site, as the International Day against Nuclear Tests.

Participating in the UN disarmament efforts, Kazakhstan has always firmly defended its principled position on the prohibition of nuclear testing. Already in 1990, at the 45th session of the UN General Assembly, speaking on behalf of the Soviet Union as Minister of Foreign Affairs of the Kazakh SSR, I briefed representatives of UN member states on the work being done in our country at that time to end nuclear testing on its territory. In 1996, already as a member of the UN, Kazakhstan was one of the first countries which signed the Comprehensive Nuclear-Test-Ban Treaty. This active position allowed us to achieve the adoption in 1997 of the special resolution of the UN General Assembly (UNGA) on rendering assistance of the international community in overcoming the consequences of many years of tests at the Semipalatinsk test site, which has been regularly considered at sessions of the General Assembly for the past 25 years.

The use of the opportunities and unique experience of the UN has greatly contributed to the implementation of economic reforms in our young state. In 1993, at the 48th session of the UNGA we initiated the adoption of a special resolution on aiding and supporting the landlocked countries in developing transit and transport systems and providing access to world markets. With the active participation of our country over the years, this work has become a separate area of UN activity.

Kazakhstan’s comprehensive cooperation with the UN relates to other areas of the Organization’s activities, including peacekeeping, sustainable development, environmental protection, protection and promotion of human rights, humanitarian activities, and development of international law. In 2017-18, Kazakhstan was elected as a non-permanent member of the UN Security Council, bringing to the work of this main body for peace and security the accumulated experience of real participation in preventive diplomacy and conflict resolution, confidence-building measures and regional security.

At various stages of its history, the UN has always been a reflection of geopolitical changes in relations among its member states. The major changes in the last decade of the 20th century provided an opportunity to move from the rigid confrontational conditions of the Cold War to a holistic interaction of the global community in addressing acute problems. The end of the Cold War brought a general sense of euphoria and hope for economic and social progress in the UN, based on the “peace dividend” resulting from the end of the costly arms race. I recall speeches by world leaders at the general policy debate of the 47th session of the UNGA in 1992, which reflected member states’ awareness of the emerging realities of the beginning of the post-confrontational period, their general disposition for the successful development of a new global system. However, the optimistic expectations were not realized, and the violent regional conflicts on ethnic and religious grounds that broke out in the 1990s demonstrated the different approaches of the states to the use of force in solving international problems, the right to intervene not only to maintain peace and security, but also for “humanitarian reasons.”

The 21st century, which has entered its third decade, has intensified global geopolitical shifts of the late twentieth century on the world stage. The escalating arms race and new uncertainties that threaten to undermine strategic nuclear stability in the world, erosion of trust between the leading powers, the erosion of international law, the growing interdependence of states under globalization and the new challenges of the time, like the COVID-19 pandemic, have become major determinants of global politics. The complex international political context of the first decades of the new century has multiplied the role and importance of diplomacy as a fundamental instrument of regulating international relations.

In this situation, the increasing role and importance of multilateral diplomacy, the main tool of which for 76 years has been the UN, a universal international institution with a comprehensive mandate and composition, is quite natural. Despite incessant criticism of the activities of this world organization during all the years of its existence, the UN has been and remains a recognized global center for joint action of member states in response to new threats and challenges.

Over the 30 years of its membership in this Organization, Kazakhstan has consistently supported its central role in addressing the world’s pressing problems and strengthening the international legal framework for interstate cooperation and collaboration.

Speaking to world leaders at the 75th anniversary session of the UN General Assembly in September 2020, President Tokayev emphasized that “Kazakhstan will always remain a strong supporter of the UN and will actively participate in fulfilling our collective aspiration for a better and happier future.”

The accession of the Republic of Kazakhstan to the UN on March 2, 1992, is forever inscribed in gold letters in the history of our independent state.

The author is the Minister of Foreign Affairs of the Kazakh SSR and Kazakhstan in 1989-91, the first Permanent Representative of Kazakhstan to the UN (1992-99).