By Zhanna Shayakhmetova in Nation on 1 March 2022

NUR-SULTAN – The operational group has been investigating 3,502 criminal cases linked to the acts of terrorism, murders, theft of firearms and mass riots committed during the January events in Kazakhstan. This was announced by Head of the Criminal Prosecution Service of the General Prosecutor’s Office Serik Shalabayev at a February 28 expanded meeting. 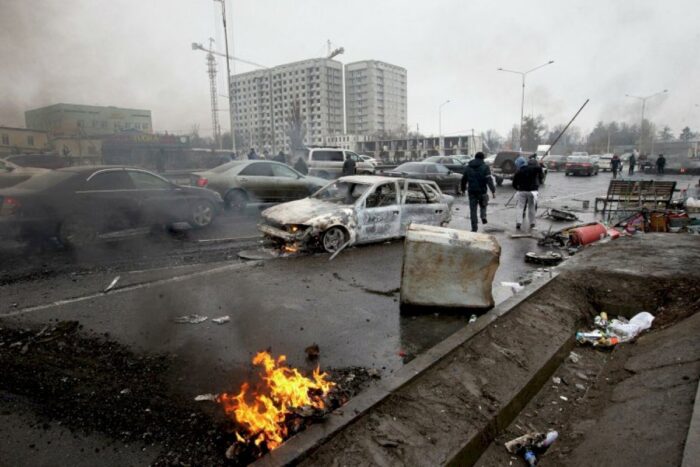 The state of emergency was declared on Jan. 5 by Kazakh President Kassym-Jomart Tokayev after peaceful protests that erupted in the country at the beginning of January were hijacked by the terrorist groups in Almaty and some other cities, including Shymkent, Taraz and Kyzylorda, causing mass violent unrest and hundreds of public and private properties left looted and damaged. Photo credit: Elorda.info

Acting Prosecutor General Berik Asylov noted that criminal groups used the situation for their own purposes during the peaceful protest in early January. “The organizers gathered destructive and criminal circles and coordinated their actions. Violence against people, pogroms and looting took place during the riots. Their goal was to frighten people and attack the authorities,” he said.

Some 737 people are being held in pre-trial detention centers and 307 persons have been released changing the measure of restraint as a result of these mass riots. More than 1,500 inspections at the incident sites have been carried out and more than 1,500 forensic examinations have been scheduled and are also currently being conducted.

“The Prosecutor General’s Office carefully checks all the facts of the use of unlawful interrogation methods by law enforcement officers. Unfortunately, we observe false complaints from those suspected in mass riots, acts of terrorism, theft and criminal possession of weapons, and attacks on law enforcement officers,” said Shalabayev.

The General Prosecutor’s Office strictly monitors the observance of rights of people who are detained during and after the riots. Measures are taken to address complaints about the conditions of detention.

“Some 203 criminal cases of torture and abuse of power have been filed. During the pre-trial proceedings, nine officers have been detained, suspected of using unlawful methods of investigation against the detainees,” Shalabayev said.

The General Prosecutor’s Office reported that the evidence-based assessment will be objective and impartial regarding all cases. The inviolability of the constitutional rights of people will be ensured.

In his interview to the local newspaper, Rizabek Ozharov, the head of the Special Prosecutor Service of the General Prosecutor’s Office, also reiterated that the special interdepartmental investigation and operational group has been conducting a thorough investigation “to understand the causes of events that Kazakhstan never experienced before.”