NUR-SULTAN – Women have long served in Kazakhstan’s military and during the tragic January events, they showed their bravery and perseverance. In the run-up to International Women’s Day, the country’s Kazinform news agency published a piece about the tremendous efforts of female soldiers during the tragic events of January. 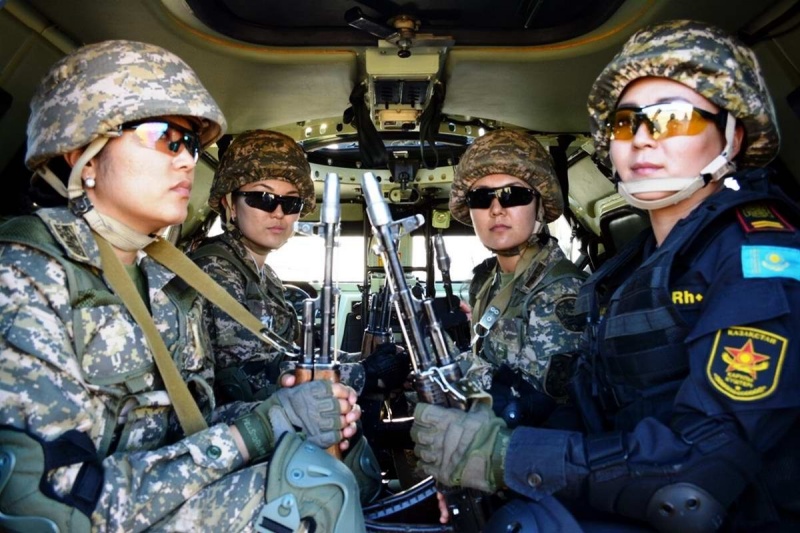 There is more than 400 female military personnel serving in the Ontustik military unit of the regional command of the National Guard. More than 12,000 women serve in the Armed Forces performing various functions from piloting, sniping, medicine and financial support.

She happened to be in an ambulance at the intersection of Nazarbayev and Kabanbay Batyr Streets on the night of Jan. 4 to 5, the epicenter of mass riots. She was involved in saving injured people, including military personnel. According to her, their car was attacked.

“They broke the windshield, the side windows, and I got hit in the back of the head in the occipital area. Then one grabbed my hair, put his hand through the window, and started yanking. I yanked his hand away and begged to be let out of the car. Then the car was set on fire. Fortunately, we managed to escape,” she said.

Major Dinara Kolbaeva, a psychologist in a military unit, has been in the ranks of the National Guard since 1998.

“In total, I have served in the National Guard for 25 years. During the January events, I was in the unit in the medical station. I was assisting soldiers. Soldiers who were injured were arriving there. My job was to make sure they were in a safe place. I supported them in any way I could. After the days were over I gave them psychological counseling,” she said.

Though military service has historically been male-dominated, it is not the case anymore.

“Every day female military workers in the Armed Forces of Kazakhstan make their contribution to the strengthening of combat readiness and defense capacity of the Armed Forces. Women in shoulder straps are always distinguished by their diligence and responsibility. You have a conscientious approach to your duties and are irreplaceable in the army,” said First Deputy Defense Minister Murat Khussainov congratulating his colleagues on the occasion.

Despite the tragic nature of the events, it was also a story of kindness and mutual assistance to those who are in greater need. The story about a state museum worker who saved the lives of young soldiers by hiding them inside the museum went viral in January.

Bibigul Dandygaraeva, deputy director of the Central State Museum, was negotiating with the armed groups diverting their attention from the basement where the wounded soldiers were hiding and persuading them not to touch the museum exhibits. Dandygarayeva succeeded in both.

While doing this, museum workers were also providing first aid to wounded soldiers some of whom were as young as 19 years old.

“They couldn’t move. As best we could, we dressed them in civilian clothes that we could get, some clothes were brought by relatives. Something wasn’t enough, something was covered with scarves, the main thing was to make them look like civilians,” she said.