Efforts to Enhance Gender Equality in Kazakhstan Receive Support from U.S. as Chair of Commission for Women Affairs Visits Washington

NUR-SULTAN – Last week Kazakhstan’s Chair of the National Commission for Women Affairs, Lazzat Ramazanova, met in Washington with senior representatives of the U.S. State Department, USAID, the World Bank, and the International Finance Corporation (IFC), reported the Central Communications Center on March 21. All participants expressed their support for Kazakhstan’s latest reforms in the fields of Women and Human Rights. 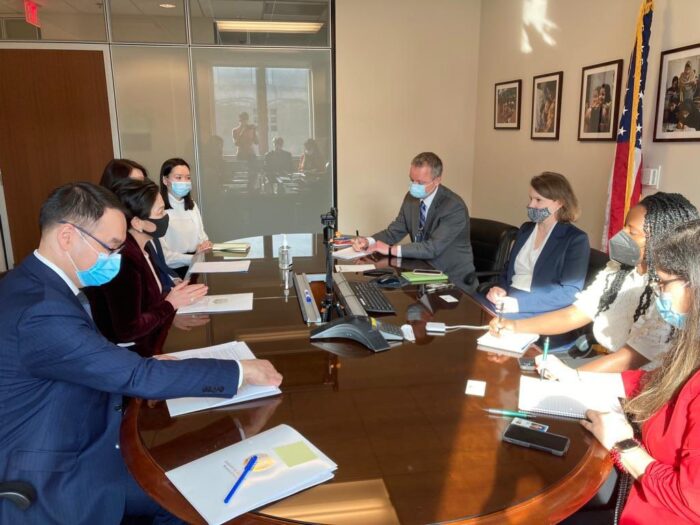 Ramazanova, who operates in Kazakhstan under President Kassym-Jomart Tokayev and is a Member of Mazhilis (the Kazakh Parliament’s lower house), is in charge of Women Rights and Family Affairs as well as Demographic Policy. The key topic of debate during Ramazanova’s meetings in Washington D.C. were President Tokayev’s policies. Ramazanova described the ongoing political, governance, human rights and socio-economic reforms announced by President Tokayev in his latest state of the nation address from March 16 and spoke about the key ideas of his New Kazakhstan agenda.

The discussions on strengthening women’s rights also touched on key achievements in Kazakhstan over the last three years. For example, the mandatory 30 percent quota for women and youth in electoral candidates lists of political parties and its application for the distribution of parliamentary mandates; the adoption of an action plan for the implementation of UN Security Council Resolution 1325; the abolition of the list of prohibited professions for women, and so on.

The U.S. organizations will also support Kazakhstan’s initiative to scale up the work of the American Academy for Women Entrepreneurs (AWE). The Astana International Financial Center (AIFC) was selected as a partner for providing the necessary financing.

Another discussion was around President Tokayev’s policy of zero tolerance towards domestic violence. In this regard, the position of the American partners was to encourage creation of family support centers in Kazakhstan.

Senior Policy Advisor at the Global Women’s Affairs, US Department of State, Beth Smith, welcomed Kazakhstan’s achievements and reaffirmed the US intention to establish a strategic bilateral dialogue in the field of strengthening women’s rights.

Jamille Bigio, Senior Coordinator of the USAID Administrator’s Office for Gender Equality and Empowerment of Women expressed her support for the reforms in Kazakhstan. At the same time, she announced USAID’s readiness to continue and deepen further cooperation in strengthening the rights of women and girls, through specific joint projects.

Henriette Kolb, Head of the International Finance Corporation (IFC) Gender and Economic Inclusion Group, spoke positively about the achievements of the Government of Kazakhstan in promoting women’s empowerment. At the same time, she gave separate recommendations on expanding financial products to support female entrepreneurs, and announced the IFC’s readiness for further dialogue on this topic.

Hana Brixi, the World Bank’s Global Director for Gender, noted Kazakhstan’s positive record in terms of granting women broad economic rights and freedoms, providing access to education, technology, developing financial literacy, and positively assessed the development of gender statistics in the country. She emphasized that Kazakhstan sets an example for many other countries. The World Bank team of experts offered a number of proposals for further cooperation in empowering women in Kazakhstan.