NUR-SULTAN – The Feb. 28 evening was tense with emotions running high at the Almaty international airport, where families and friends were ready to greet their loved ones returning from Ukraine on the first repatriation flight that brought 175 Kazakh citizens home. 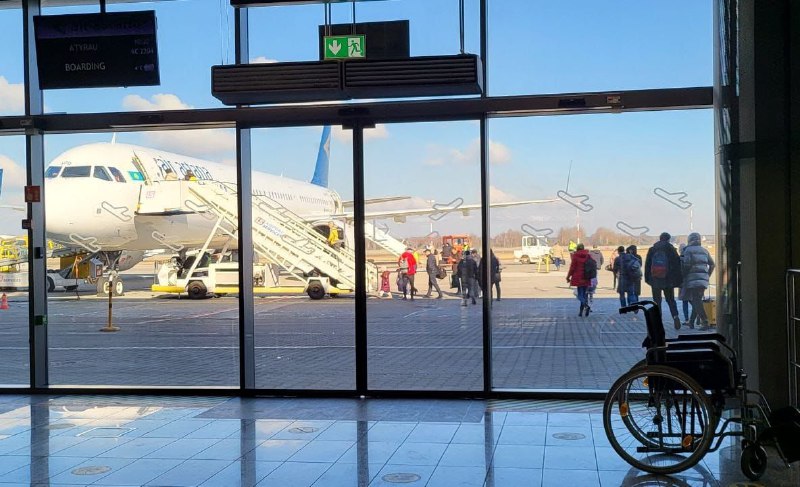 The journey was long and exhausting and sometimes quite dangerous, but the idea of getting back home to hug your family was motivating enough. The Kazakh diplomats accompanied citizens on buses from Kyiv and Lviv to the Polish border, where the Kazakh embassy and local officials ensured a green corridor for the Kazakh citizens to reach the airport in Katowice in southern Poland.

“People from other states go on foot, no one takes them, they cry, we can’t take them all. This is from the neighboring states of Kazakhstan. But believe me, they (diplomats) take us, they help us, we sit in a comfortable bus, we charge our phones and send you messages,” said one of the passengers.

Another passenger, who has lived in Ukraine for nearly three months, also thanked the diplomats and said that he would like to go back once the situation stabilizes.

“I myself was in Lviv. I went there before the New Year, I lived there for almost three months. I have a business there. We deliver cars from the United States and China. We help people buy new cars and deliver them there, including to Kazakhstan,” he said. “It’s a wonderful country. I’m an Almaty native myself, a citizen of Kazakhstan. We were one of the first to get out of there. I want to once again thank the staff at the diplomatic mission. They did a very good job.”

Kazakh Foreign Ministry Spokesperson Aibek Smadiyarov said his colleagues from the Kazakh Embassy in Ukraine work day and night to bring their fellow citizens back home safely. As of Feb. 26, there were 528 requests from the citizens who were in Ukraine and the majority of them were in Kyiv.

“A hotline was opened at the Embassy of Kazakhstan in Kyiv, as well as in the Ministry of Foreign Affairs. Honorary consuls of Kazakhstan in Dniprj, Lviv, Odesa, and Kharkiv are also involved. Our diplomatic missions in Poland, Moldova, and Belarus also took part in this complex work,” Smadiyarov told a Feb. 26 press briefing.

Air Astana President Peter Foster, who was also accompanying Kazakh citizens along the way, said the airline will operate repatriation flights until every citizen returns to Kazakhstan. He noted that it was very difficult to gather all the people and cross the border.

“The system of collecting passengers at the border and at the airport in Katowice to provide flights is more or less established, so we hope that all this will go on without difficulty,” said Foster, noting the airline’s readiness to organize up to five fights, if necessary. “We will primarily perform these flights for citizens of Kazakhstan. According to the embassy, there are 1,500 to 2,000 Kazakhs registered in Ukraine. We cannot say exactly how many of them will want to leave the territory of Ukraine. We will also need to take into account how quickly people will cross the border. The queue is moving very slowly there.”

The Kazakh Embassy in Ukraine said on Tuesday that it is compiling the list of people for the next group for evacuation on the route Kyiv – Lviv and asked the citizens to urgently contact the embassy.

Berik Uali, the presidential spokesperson, said on Monday that President Kassym-Jomart Tokayev is closely monitoring the situation. Kazakhstan’s Ambassador to Ukraine Darkhan Kaletaev briefed the President on the ongoing efforts to return citizens.

“The President positively evaluates the work that, despite various difficulties, is carried out by the Ministry of Foreign Affairs, employees of the embassies, honorary consuls of Kazakhstan in Ukraine and Poland,” wrote Berik Uali on Facebook.