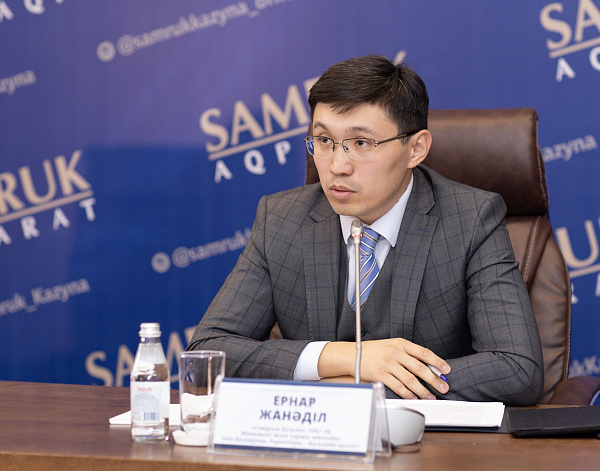 The listing of both companies was planned several years ago and has been delayed since then due to external factors, said Zhanadil. Speaking about Air Astana, he said that the “COVID-19 pandemic strongly affected the market of air travel.”

“As the market declined, we decided to wait, especially because airlines had to urgently address their anti-crisis plan,” he said.

Many airlines either went bankrupt or received a subsidy from the governments during the pandemic, according to Zhanadil. He said that Air Astana did not receive any financial support and yet it was able to overcome the crisis. The company shows good results, mainly due to the high demand for its low-cost airline – Fly Arystan.

Regarding KMG, Zhanadil said that Samruk Kazyna previously decided to postpone the IPO due to the drop in oil prices in March 2020. Despite all the preparations made for a successful listing, “it made no sense at that time to launch an IPO,” he said.

“Taking into account the large size of the companies it is necessary to consider their commercial interests… Exclusive placement on the local markets could lead to the lower selling price of shares, even when there is a significant demand from international investors, who could offer a price that is higher than ours,” said Zhanadil.

The IPO of national companies will be accessible to the public and at least 20 percent of shares will be listed at KASE or/and AIX (Astana International Exchange).

Tsaluk also asked about plans for the implementation of the privatization plan that was approved for 2021-2025. Zhanadil said that the government privatization plan includes 25 assets of the fund, eight of them large companies and 17 smaller assets. Each of those companies has multiple subsidiaries, which makes around 180 companies eligible for privatization.

Investors in the energy sector are focused on the principle of environmental, social and governance (ESG) strategy investment. Samruk Energy has the facilities to generate more than six gigawatts of electricity, but most of it is generated from coal. Therefore, the company needs to increase its green assets portfolio to be in demand at the IPO, said Zhanadil, adding that they plan an IPO in 2023-2024.

KazPost was supposed to be privatized through a direct targeted sale to a strategic investor back in 2021. “We did work through an open two-stage tender, but unfortunately the price offered did not satisfy the fund. As a result, we came up with a proposal to the government to postpone the sale for two more years. During that time, we will begin strategic initiatives to improve the company’s operating activities, so that it would increase the value of the company,” said Zhanadil.

As for KTZ, Zhanadil said that the company has to resolve the issues related to its large infrastructure assets, large debt burden, and the issue of tariff setting before applying for a listing. It will not be ready for IPO by 2023, he added.