NUR-SULTAN – The Ministry of Industry and Infrastructural Development announced technological modernization plans in the military-industrial sector as part of the reforms set out by President Kassym-Jomart Tokayev. 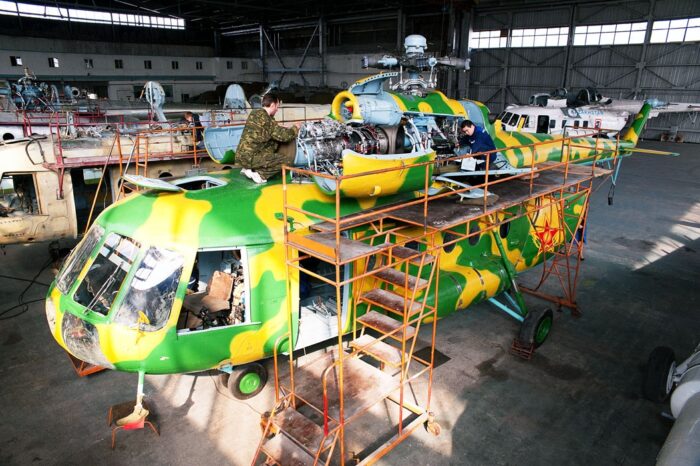 The President spoke about the new tasks set for the Armed Forces during the Jan. 19 meeting with the leadership of the Ministry of Defense. He emphasized the necessity  of increasing the military capabilities of the Armed Forces. The plan for the acquisition of weapons and military equipment should be revised taking into account the events of January.

The restructuring of the Armed Forces, law enforcement agencies, national security agencies, and intelligence services was also on the agenda of the plenary session of the Majilis, the lower house of Parliament, on Jan. 11.

One of the initiatives included the upgrade of the technical and military equipment.

The ministry reported that Central Asia’s largest aircraft repair facility ARZ405 will now assemble Mi-171Sh helicopters. The Almaty-based plant is engaged in repair and modernization of civil and military helicopters.

Aidar Anuarbek, the head of the project management company for the assembly, repair and sale of aircraft, said that the company invited foreign and experienced specialists who have worked with Airbus C295 aircraft.

“The number of aircraft is growing worldwide, which leads to the number of repairs. We have the engineering staff who repair our military vessels. We plan to work with the civil aircraft of Airbus,” said Managing Director of Kazakhstan Engineering National Company Saniyar Aitekenov.

The plant in Kokshetau will also start producing the Kalashnikov rifle 2015 model.

Meanwhile, the Petropavlovsk Heavy Engineering Plant will produce technical equipment for protection of the state border.

The Tynys, the large machine-building enterprise in the Akmola region, an Almaty-based Alma DK company that produces special military equipment and the Militarm company agreed to manufacture radiation and chemical protection gear. The Tynys company will also produce AK-12 and AK-15 rifles.

The Semei Engineering company intends to modernize the production of armored vehicles and the Steel manufacturing company will produce automated ammunition.

On Jan. 18, the Finprom analytical agency reported that Kazakhstan provides insufficient funds for military expenditure both nationally and globally (only 1 percent of GDP). This is a comparatively low indicator by international standards. The experts believe that the government will increase spending on the military budget taking into account the recent attacks.

Kazakhstan ranks 64 of 140 out of the countries in the 2022 Global Firepower (GFP) annual defense review. In the military strength ranking, each country is evaluated on a multitude of factors related to a prolonged offensive or defensive military campaign. The U.S.A., Russia and China take the leading positions in the ranking.