By Staff Report in Nation on 8 February 2022

NUR-SULTAN – The high (orange) terrorism threat level has been canceled starting Feb. 7 as the situation stabilized in the city of Almaty and the Zhambyl region, reported the regional operational headquarters for combating terrorism. 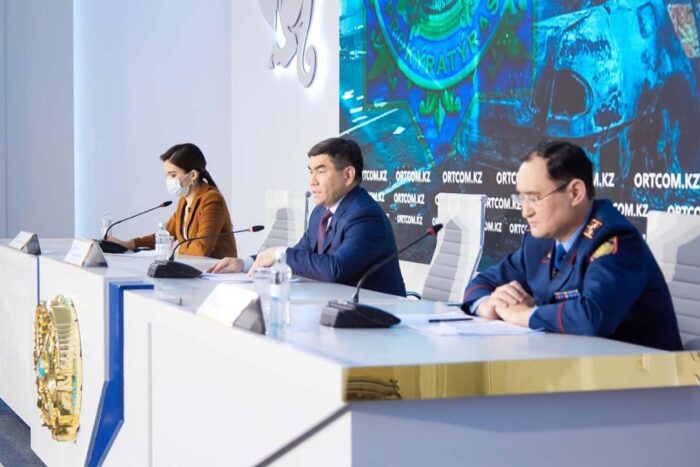 The representatives of the General Prosecutor’s Office and the Ministry of Internal Affairs during the briefing at the Central Communications Center on Feb. 7.

The special and law enforcement agencies will continue their activities. The critical (red) level of terrorism threat was introduced on Jan. 6. A state of emergency was in effect from Jan. 5 – 19. The critical level was lowered to high on Jan. 26.

On Feb. 7, the General Prosecutor’s Office and the Ministry of Internal Affairs reported about the investigation into the tragic events in early January during the briefing at the Central Communications Center.

According to Head of the Special Prosecutors Service of the General Prosecutor’s Office Rizabek Ozharov, individuals and criminals joined the peaceful protests that led to attack, looting and riots. They used stolen firearms against security officers and civilians. These coordinated actions, including armed seizure and attacks on administrative buildings, are officially regarded as acts of terrorism.

Overall, 2,548 criminal cases are under investigation. A total of 887 persons have been placed in temporary detention facilities, and 789 of them have been arrested. Apprehended material evidence, CCTV footage, witness statements and other evidence proves their culpability.

An independent monitoring of the observance of the rights and conditions of the detainees has been ensured, according to the ministry. The representatives of the National Preventive Mechanism (NPM) and public monitoring commissions have access to all detention facilities. Each complaint about abuse of power and excess of power is assessed by the internal security service of the Ministry of Internal Affairs and special prosecutors.

On Feb. 4, Sanzhar Adilov, the head of the investigative department of the Ministry of Internal Affairs, reported that during the attack, 19 police officers and military personnel were killed. More than 3,000 officers were injured. An investigation continues to identify casualties among civilians.

Some 1,573 properties, 765 cars including 551 police vehicles and 124 private cars were damaged during the riots. Overall damages reach 88 billion tenge (US$203 million). Some 828 firearms and more than 18,000 units of ammunition and 286 special equipment that were stolen have been confiscated.

The criminologists of the Ministry of Internal Affairs are working on identifying the criminals based on the seized traces.

“The officers have already conducted more than 15,000 investigative procedures including interrogations of victims, witnesses and suspects, inspections, searches and other activities in Almaty. We would like to express special gratitude to the people who assist the investigating authorities in collecting evidence and identifying criminals. For example, people helped to prevent an attempt to sell six units of stolen firearms, which were handed over to the police in the Almaty region. A pre-trial investigation has been launched and the suspects have been detained. They were also involved in the looting of retail outlets at the Almaty airport,” said Adilov.

The General Prosecutor’s Office reported that 148 complaints were submitted about the use of unlawful methods of investigation and abuse of power and 105 criminal cases have been filed. All complaints of people, including those posted online, are being thoroughly investigated by the prosecutors and the security departments of the Ministry of Internal Affairs. Human rights organizations also take part in the investigation to ensure openness and transparency.

It is reported that 103 people have been released from temporary detention facilities.

A legal assessment of actions of people will be available only after the completion of all investigative tasks. Forensic examinations are being conducted to carefully examine the circumstances of all deaths that occurred.