NUR-SULTAN – The government should no longer be the sole institution responsible for the fight against terrorism, according to State Secretary Erlan Karin. 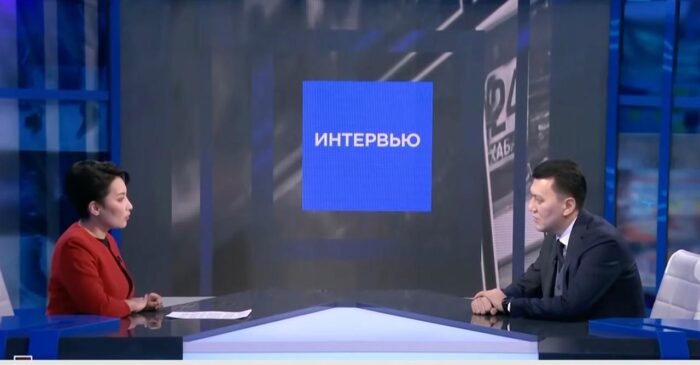 Erlan Karin during his interview with Khabar 24 ТV news channel.

All members of society should become allies in the effort to enhance security and combat terrorism “if we do not want to repeat this violent course of events going forward,” said Erlan Karin in his interview with Khabar 24 ТV news channel referring to the January unrest in Kazakhstan that caused massive destruction of public and private property and the death of civilians.

Based upon several comments received by Karin, apparently, there still were people wondering what kind of ideology the terrorists were adhering to, and if those people were, in fact, terrorists. The suggestion that terrorism is bound by an ideology is wrong, said Karin.

“Terrorism should not be seen as a system of beliefs or ideological values. Terrorism is a strategy and a tactic of fear and intimidation of the population,” he added.

Karin said that the government relies on the universally recognized definition of terrorism that is accepted by states and international organizations, and that includes “havoc, attacks on police and law enforcement buildings, seizures of administrative buildings, attacks on civilians, attacks on social facilities, particularly hospitals.”

“These all are the elements of violent extremism and there should be no justification for such violent actions,” he added.

Despite the lifting of the state of emergency on Jan. 19, the counter-terrorist operation continues in some regions.

Describing the timeline of events, Karin said that it was a well-organized attack directed by both internal and external extremist forces. Up to 20,000 people arrived in Kazakhstan to participate in the revolts. Special security services have identified a group of foreigners, who arrived in Kazakhstan in late December, and tried to leave the country on Jan. 7-8 using different routes. It has been established that they were members of several radical extremist organizations. They tried to use the riots to unleash a series of attacks with the intent to destabilize the government, but their actions were suppressed.

The counter-terrorist operation has yielded its first results. Law enforcement agencies have seized more than 2,000 weapons and 44 criminal cases were initiated under the terrorism articles.

Informational warfare was underway simultaneously with the unrest. “There was a large flow of misinformation and fake news,” said Karin. Moreover, the extremist groups used chats to give specific directions to people on how and where to attack.

“One of the organizations, which was recognized by the court as an extremist organization, provoked these demonstrations and openly instigated violent actions, in particular, the seizure of administrative buildings. It was through the chats of this organization that specific instructions to seize buildings, to block roads and transport hubs were distributed,” said Karin.

According to him, the synchronicity of terrorist actions, and the fact that they were able to lead attacks in different regions of Kazakhstan simultaneously are corroborations of the fact that the attacks were an organized crime prepared by extremist parties.

“We see an attempt to bring a radical ideology, a radical line of behavior to our society, so the overall task is to block the spread of such ideologies to society. We must all fundamentally fight such extreme views,” concluded Karin.