in Central Asia, International on 28 January 2022

NUR-SULTAN – President Kassym-Jomart Tokayev attended the first ever Central Asia  – India summit of the heads of states on Jan. 28 organized at the initiative of the Prime Minister of India Narendra Modi, reports the Akorda press service. 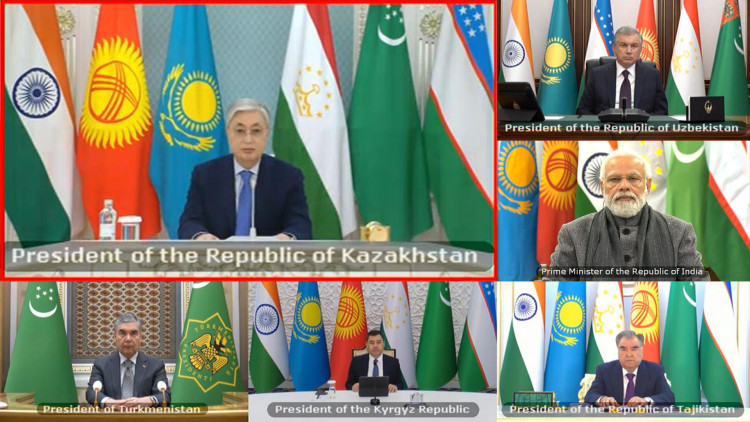 The leaders gathered for the first ever summit to discuss cooperation between Central Asia and India. Photo credit: Akorda

Addressing the meeting, Tokayev noted the progress that India has made over three quarters of a century.

“It is symbolic that this summit is held in the year of the 30th anniversary of the establishment of diplomatic relations between Central Asia and India. Over these years we have established a constructive political dialogue, we are constantly expanding multifaceted economic and humanitarian ties. Our vast Asian region has enormous resources and huge intellectual potential. Important transport corridors and fast-growing markets are concentrated here. The role of Asia in the world economy has increased significantly, it is becoming a new global center of attraction of investments and capital,” said Tokayev.

According to him, this opens up great prospects for cooperation, particularly in trade, where the countries of Central Asia and India reached $3 billion in 2020. 80 percent of that trade was accounted for by Kazakhstan.

But in the total trade volume of India, Central Asia accounts for less than one percent. Tokayev supported India’s initiative to create a trade and economic platform at the level of ministers of trade and industry and reaffirmed Kazakhstan’s commitment to boost the figures, including expanding India’s exports to Kazakhstan.

“However, the current figures still do not match our aggregate economic potential. In my opinion, the work of such dialogue platforms as the Central Asia-India summit is of great practical benefit for the progressive development of our countries, as well as the development of effective responses to new challenges and risks. I am confident that this unique format for the productive exchange of views will facilitate cooperation between our countries to a qualitatively new level,” he said.

Kazakhstan and India will also benefit from Increased investment flows, according to Tokayev. Among the promising areas that he outlined were mining and metallurgical complex, agriculture, green energy, healthcare, and the pharmaceutical sector.

He also invited Indian companies to come to Kazakhstan to work in artificial intelligence, Big Data, the Internet of Things, online commerce, and cybersecurity. Opening an engineering office and IT school for Central Asia on the basis of the Astana Hub International Technopark of IT start-ups with the Bagmane Technology Park and other Indian IT giants could be the first practical step towards that goal.

He also outlined his vision of how the Central Asia-India dialogue could move forward, emphasizing the need for the development of trade and economic cooperation and the establishment of transit and transport links, where Central Asia, according to him, possesses enormous potential.

In Kazakhstan alone, there are 11 international transit corridors, including five rail and six automobile corridors. Tokayev also noted the transit opportunities within the common customs system of the Eurasian Economic Union in the north-west direction and the south-west route through the Kazakh ports of Aktau and Kuryk.

“I am deeply convinced that the creation of a reliable, efficient, and safe transit infrastructure should be a key element of the architecture of interconnectedness of Central and South Asia. For this purpose, I propose to consider the possibility of creating an interregional transport and logistics consortium that could ensure effective coordination of national policies regarding full and mutually beneficial loading of transport routes in the direction of India and ports in the Caspian Sea and the Persian Gulf,” said Tokayev.